You are here: Home / Life / Academics / The Consequences of Ignoring My Passion: An Extremely Practical Degree

To call my computer science degree the biggest mistake since non-skippable YouTube ads is hyperbolic and almost funny, so hopefully it’s sparked some interest.

As a senior, realizing I majored in the wrong subject is daunting enough. To call that mistake “computer science,” which boasts job security and a starting salary of $60,000, seems almost profane. I go to career fairs and companies already have pom squads cheering, “R-U-S-S-E-L-L, you have us under your spell! Go Russell! Go Russell!” Meanwhile my English major friends sit slumped against the back wall muttering into their cigarettes about freelancing. I should be grateful I’ve made it this far at a prestigious university with good grades and an employable degree, but it’s not what I want.

Looking back on my high school interests, computer science seems almost a non sequitur. By the end of senior year, I had written and published a book, The Iron Forest, and earned a two on my AP computer science exam. Though The Iron Forest reads like a book report of a bad fantasy novel, I thought I had dumped enough genius into the literary arts and decided instead to stake my future on a subject for which The College Board deemed me “possibly qualified.”

I made the mistake of majoring in what I thought I should, basing my college career on a rickety sense of my ideal self. I would be that practical-skill-having high-earner who would write as a hobby. Yet at my internship, I avoided data-entry by writing articles for Elite Daily, and for years I’ve wanted to rescue the plot of my book from its own exposition and rewrite it. Eventually, the idea of writing for a living wrapped itself around my weak foundation and tore it down, leaving me to construct a whole new sense of who I wanted to be.

As naïve and hopeful as it definitively is, I want to pursue comedic writing and performing, the low-demand and even lower pay-scale of which is the antithesis of a career in tech. Almost 1.5 million people work tech jobs in Silicon Valley, but fewer than 10 star in the show that makes fun of it.

No one knows the reality of these odds better than me…except my parents. I’ve been ambushed aplenty with conversations that boil down to, “For the love of God, keep all your doors open.” I love my mom and dad, and thank goodness that my selfless parents have worked long hours at practical jobs to set up their selfish son to pursue his silly dreams. They have my best interests at heart, but I’ve realized that “best interests” mean very different things to a dad who works for his family and a son who has this great joke about palindromes. “Best interests” for Baby-Boomers tends to include financial security, which to me, seems more like a means to fulfillment than its end. All I want is constant validation through laughter, and Dad just wants to make sure that doesn’t mean witty cardboard signs. 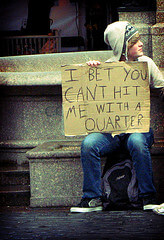 They’ve tried every argument to convince me of CS. As the value of a Boston College education sums to a ludicrous $250,000, it’s fiscally prudent that a quarter million dollar investment should translate into a $60k starting salary rather than a $35k – $45k excuse to steal Wi-Fi from coffee shops. But what they fail to realize is that that I’m not a house they’re flipping. And while my father may have enough saved to keep Redbox movies out for weeks at a time, never has he started a funny anecdote with, “At work today…”

While having brunch with my mom, she admitted, “You know, I don’t know if your father has ever liked any job he’s had,” to which I spit out my potatoes and exclaimed, “That’s no way to live!” Easy to say when you’re a childless 21-year old eating a mom-funded omelet. She later said, “Zach, I think I know what you need to do. Find a job that pays well, has flexible hours and that you love,” to which I responded, “Yeah…we solved it.” I waited for a follow-up that never came and realized that that was her entire point. Yet she spoke with such conviction I almost thought we had experienced a breakthrough about my career.

As my friends struggle through similarly desperate career crises, I marvel at one with envy: for he happens to love his tech job, which also happens to be well-paying and in California. It may seem strange to bring up equal rights, but the notion that you can choose who you love seems just as absurd as trying to choose what you love. In quick retort, my Dad might say, “A job’s a job. You’re not supposed to love it,” which illustrates the disconnect between most dads and their artsy sons: that “hobby” is not enough.

It’s taken years to uncover my passion and frankly it sucks that it’s so hard and requires so much work. With my credentials, getting a CS job would be easier and more straightforward than getting a writing job. All I’d need to do is fill out some applications, dress up real nice and slide my way into the tech market. Sometimes I feel obliged to do exactly that, if only to satisfy my parents or my lingering ideal self.

Sometimes when it’s late at night and I remember I ordered a pizza an hour ago, I wish I hadn’t ordered the pizza. It shows up, I open the box, pay the pizza-person (it’s not delivery, it’s non-gendered) and think out loud:

“I have to eat this pizza.

Who else will if I don’t, my roommates? Not a chance.

People are counting on me to eat this pizza.”

And while I’ve criticized my mom for constructing analogies better than this, after all these crises of faith about my major, I finally realized I don’t have to eat the pizza.

Senior at Boston College studying computer science and English. Currently unemployed, he frequents bars after 5 p.m. to vicariously complain about others' workdays.

The Time When I Didn’t Know if My Teacher Was Male or Female
Next Post: They’re Not Really Your Friends if You Don’t Hate Them