Greek life: a combination of outrageous parties and overpriced Vineyard Vine tanks. The Greek culture celebrates unity in brotherhood and sisterhood, and Penn State University is no exception. PSU takes Greek Life to the next level, mostly due to the immaculate housing they are provided with. Some look like they’ve been pulled right out of a storybook fairy tale, except what goes on inside the houses is definitely not fit for publishing. Sorority houses are not allowed in the state of Pennsylvania, but with 45 fraternity houses at Penn State, there will be no shortage of Greek social life here.

Delta Sigma Phi’s house is quite different from the rest. The pink walls create a calming presence on an otherwise intimidating walk through Frat Row. The smooth walls are rare as are the seemingly endless rows of windows facing out into the world. The patio behind the house provides a setting where privacy is not an issue and kicking back with a brewski is welcomed. ΔΣΦ is unique (come on, pink walls) which is why it ends up in spot number 10.

The entire Alpha Tau Omega house has an almost presidential look to it. The columns stand tall creating a balcony for a third floor lookout. It’s located on East Fairmont, just minutes from downtown State College and most classrooms. The yard is well kept and destruction is minimal due to its picturesque elegance. The fraternity displays all awards in a glass case for all to see inside. ΑΤΩ evokes an elegant simplicity.

Located right on Fraternity Row, Alpha Gamma Rho’s house displays the stereotypical white columns and southern glow that seems to be a common look among houses. However, the brothers really keep it tidy and clean and that cleanliness sets it apart from other house. Alpha Gamma Rho brother Trevor Stauffer said this house is pretty unique to the brotherhood. It was built in 1968 after being burned down in 1966, making it not as old as some of the other houses in State College. “We spend time out on the porch and patio chilling, grilling or watching the town go by,” he said. “It’s perfect.”

Delta Upsilon’s house looks like it came from a magical woodland forest. Walking up to the arched door makes you feel like Sleeping Beauty will be right there to greet you. Picture-perfect pines surround the house creating beautiful scenery for those exhausting day longs. ΔΥ recently constructed a large wooden fence around the whole property to engage in more private parties, and now the day longs can be even longer. Located right across from downtown, this frat house is on point.

Although the ΒΘΠ house is alcohol-free, the charming red brick house will not disappoint. It’s right on Burrowes, making the house a perfect setting to hang out on the lawn or porch and people watch as students make their way to class. Established in 1888, Beta Theta Phi is the second oldest fraternity at Penn State. Although they were kicked off during the 2009-2010 academic year, they reestablished their chapter in Fall of 2010 with a newly renovated establishment. This house is perfect for short walks to class. Oh, and not to mention the free campus Wi-Fi.

This house is really interesting. I mean, what is in that turret? Archers ready to defend the house? A princess, locked away, waiting for her prince? Let’s hope not. Sigma Chi is a well-known frat with parties on the weekend and celebratory day longs when the weather’s nice out. With 240 active Chapters, ΣΧ is the 2nd largest Fraternity in the nation. The unique Tudor-style architecture earns Sigma Chi bonus points.

ΣΑΕ is huge. It doesn’t even look like it should be qualified as a house, maybe like a frat mansion of some sort instead. The massive lawn and the back of the house cannot be captured in a picture. The fact that this place has a governor’s driveway on the side proves its worthiness as a mansion. President of Sigma Alpha Epsilon Peter Mathews said he loves living with 45 of his closest friends down the hall. “Being up on a hill looking over Beaver Ave and seeing everyone that visits Penn State pass by is really cool,” Mathews said. “The physical structure of the house is defined by the character that lives within.”

Sigma Phi Epsilon’s house reins as number 3 on the list with its pinkish sand walls and red-shingled roof. It’s an enormous Spanish style house right in the middle of Happy Valley. Sigma Phi Epsilon brother Raul Silaghi said the house has been standing for over 100 years and constantly gets renovated and repaired for maintenance purposes. “It’s really the brothers, not the location or style of the place, that make the house special,” he said. “Although the Spanish villa always caught my attention.” Silaghi described ΣΦΕ as a great place to really enjoy the frat culture that Penn State has to offer.

Chi Phi looks like Snow White used to live here, gently tucked away with a nice front lawn, trees in the backyard and perfectly-placed stones over ever inch of the houses outside walls. ΧΦ is a good distance from campus and downtown, but living in a place like this is well worth the walk. The brothers invested $1.7 million in renovating the house complete with their own personal library, multiple clubrooms and a fresh bathroom revamp for the ladies. The curvature of this house adds to the unique factor.

ΣΠ is number one on our list as the best looking Greek house at Penn State. The outside is truly incredible with multicolored stone  walls, large window fronts and lavish balconies. The combination of the Tudor wooden slats and cobble stone walls makes for another unique storybook fantasy house, but the size of this place would fit a lot more than seven dwarfs. The aesthetics of this immaculate castle is not what usually comes to mind when someone says Frat House, making Sigma Pi a structural work of art. With the largest front porch at Penn State, their tailgates and day longs can’t be beat. 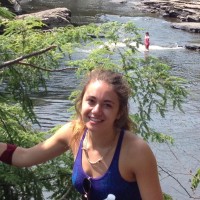 Megan is a junior at Penn State University majoring in public relations with two minors in psychology and digital media metrics. She enjoys a good cup of coffee, her chihuahua Punky, and snowboarding in the winter.

10 Terrible April Fools’ Pranks that Need to Vanish Forever
Next Post: How I Embraced T(winning)