10 Reasons Why UMD has the Best Sports Fans

Supporting our Terps isn’t just a hobby, it’s a lifestyle.While some may consider owning more Maryland apparel than normal clothes and practically worshipping the Maryland flag slightly unhealthy, we can’t help it. When you attend a school with insane flash mobs, free t-shirts and a dominating student section, you’ll understand why UMD students “Fear the Turtle” more than they fear their GPA.

The Pride is the official fan group for University of Maryland athletics. Students stock up on points by attending different sports events and are rewarded with free t-shirts and other perks like discounted or free tickets to big away games. Becoming a member of The Pride takes your school spirit to another level.  If you played a drinking game where you took a shot for every Maryland flag you saw hanging in somebody’s dorm, it wouldn’t end well for you. We plaster the flag on shirts, hats, blankets, nails, picture frames, phone cases—you name it. Every Friday during football season, red, black, white and gold cover the entire campus (and we’re not even good at football). One friend that visited me from a different school asked, “Why is everyone here so obsessed with their school?” #sorrynotsorry

The Big Ten Network voted our student section in the Xfinity Center the best student section for the past two years in a row. Did I mention we’ve only been a part of the Big Ten for two years? Instead of designating students to one small section of the arena, Terps wrap around the entire court, creating a “wall” of intimidation for the opposing team. You know it’s about to go down when the Maryland flag lowers and everyone starts jumping to the beat of the music blasting through the speakers. “The loudest I’ve ever heard Xfinity was that Georgetown game. The roof was about to explode,” sophomore Dante Evans said. Freshman Jared Golstein added, “[T]here were points where I was yelling and I couldn’t hear the sound coming out of my own mouth.”

If you haven’t heard of the “Running Man Challenge,” you probably live under a rock. The latest dancing trend went viral thanks to the UMD basketball team. You know your school has won celeb status when the athletes score a spot on the Ellen show. UMD trends don’t stop there either. How about flash mobs that include the entire student section each year? The tradition began at UMD four years ago, gaining the attention of Sportscenter. Now it’s featured in newspapers like the Washington Post. The Running Man may fade, but some trends last forever. The flag that comes down at every sporting event, raising our fists when we spell out M-A-R-Y-L-A-N-D in the Victory Song, the scarves for The Crew, the coined phrase, “Fear the Turtle;” all of these traditions define University of Maryland sports fans.

Not many colleges can say they have a fan club solely for their soccer team. Attending soccer games became so popular to the point that the line to get in stretches close to the Denton Community over an hour before start time. Against UCLA (ranked first in soccer at the time) we won in golden goal mode and the fans went so crazy that the fence collapsed (If you don’t believe me, check out this video). Terps take competition seriously. School spirit is so rambunctious in the stands, we leave opposing team members with dropped jaws. “The time commitment that’s put in by our students—amazing,” Evans said.

Yes, every college has a mascot, but none interact or engage with the crowd like Testudo. You won’t see Testudo chilling casually on the sideline during a game. He kicks the football around the student section, completes push-ups for every point scored for each touchdown, beats the drums passionately before the flag comes down and he defeated the Stormtroopers at the flash mob this year. “He was crowd surfing the student section when we rushed the court last year when we beat Wisconsin,” Evans said. We wouldn’t be the Terps without Testudo.

6. Relationship With Our Players

Athletes rarely associate with “normal students” at most universities. Not at Maryland. Yes, we treat our athletes like celebrities, but when it comes down to it, they’re average kids like the rest of us. They eat in our dining halls, ride our buses, work out in our gym, party with us at the frat parties and bars and even add us back on Snapchat. “You see them in the [Stamp Student Union]… the entire starting line up for the basketball team in the Chik-fil-A line, casually just talking,” said Evans, “They’re so chill, they’re so down to earth. We treat them like stars in their own way, but they don’t act like it.”

Anytime you hear “Fear the Turtle,” people know you’re talking about the University of Maryland. “I live in North Carolina. When people found out I was going to Maryland, my co-workers were like, ‘Fear the Turtle,’” said Evans. The slogan caught on due to Maryland’s rep as a basketball powerhouse. No one forgets the legend of coach Gary Williams and the games leading up to the championship in 2002 versus Indiana played in Cole Field House. “I’ve know people who have applied to Maryland…solely because… they’ve loved it all their lives and the history and the basketball program,” Evans said. We don’t stop at basketball. The soccer team won two national championships and the lacrosse team has won over 15 national championships. At UMD, every day feels like sports history in the making.

Ask a Terp to wake up for an 8 a.m. class and he’ll laugh in your face. Ask him to wake up at the crack of dawn to get basketball tickets and he won’t question it. Terps go hard. “[At the] Wisconsin game last year it was about 27 degrees…me and my friend Veronica got there at 8:30 in the morning…doors don’t open until four…the sun hides behind a cloud and it turns into Antarctica out there. It’s so cold, my hands are numb to the point that they’re hurting,” Evans said. “We got front row.” Students will take shifts standing in line, and alternate as some go to class or get something to eat. “For a seven o’clock game time, I’ve been in line as early as 4:30,” Goldstein said.

One of the best parts of a basketball game is witnessing the Turgeonites. The Turgeonites are a group of basketball fans that dress up like Coach Turgeon, all-out in a suit and patch of gray hair on top of their heads. The Turgeonites have been featured on The Big Ten Network, CBS and Fox News and even dance occasionally with the UMD Dance Team. They even had a photo shoot with Coach Turgeon last year. “I’ve been a huge Terps fan my whole life…I still [participate with the Turgeonites] now because it’s a blast. You get to act like an idiot,” Turgeonite and UMD grad student Nick Riddlesberger said. Turgeonites just add to the already great Maryland fan base.

They tried teaching us the song at orientation, but we just didn’t get the hype. But once you experience the victory song at your first big Maryland sporting event, you’ll finally understand. The entire student body raises their fists with every letter as they spell M-A-R-Y-L-A-N-D at the top of their lungs. You may not know all the words in the middle, but that doesn’t stop you from screaming with as much spirit and confidence as the UMD dance team. 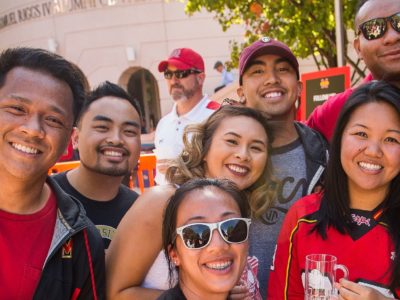 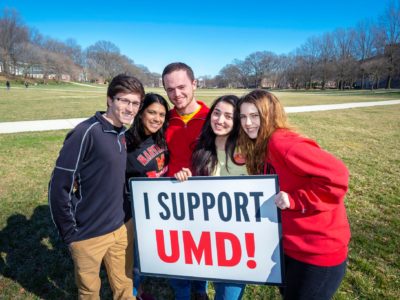 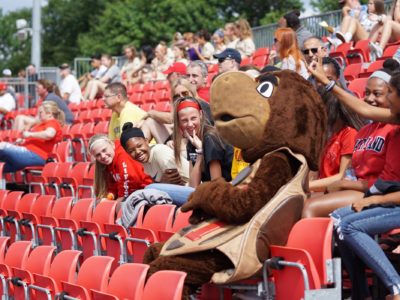 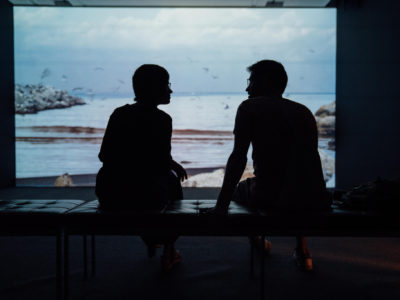 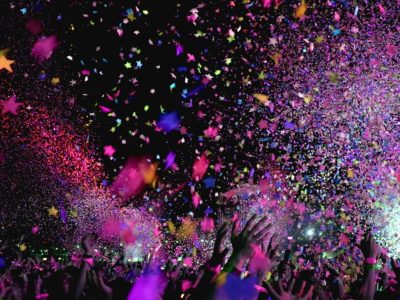 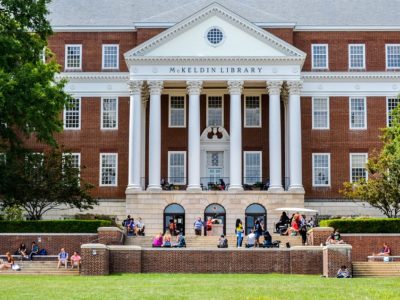 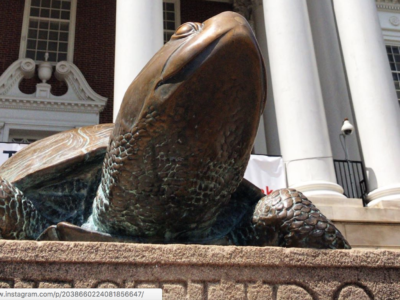 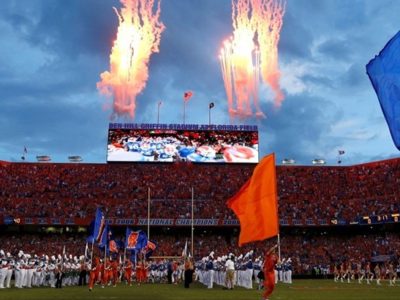 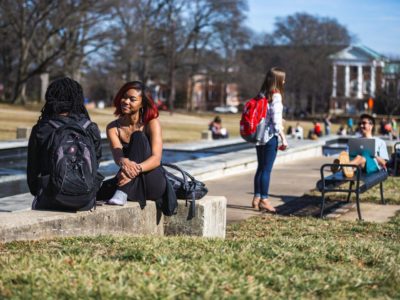 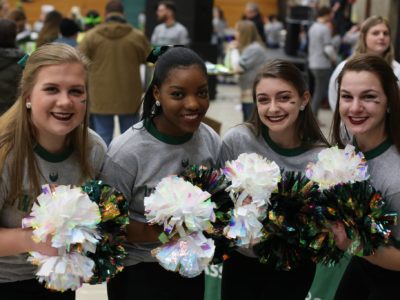 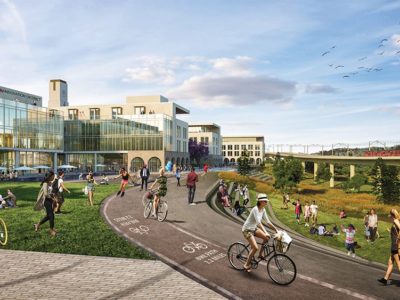 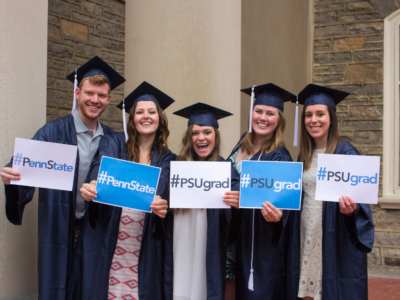 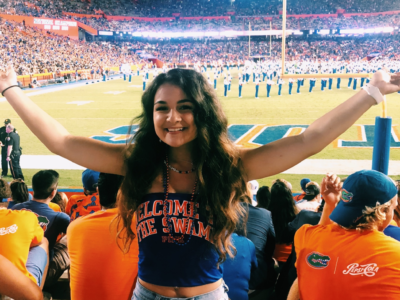 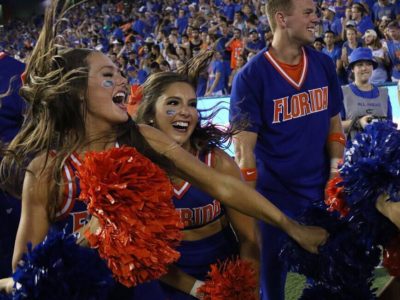 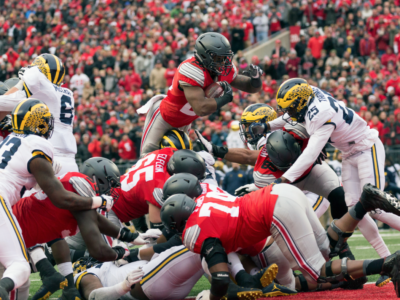 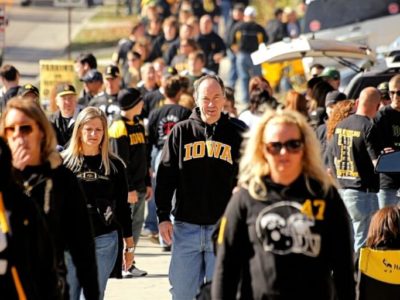 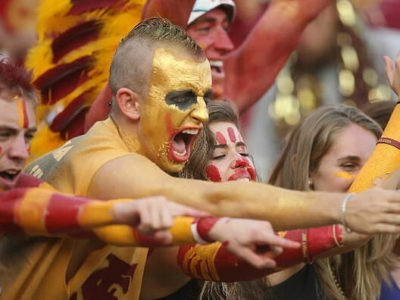