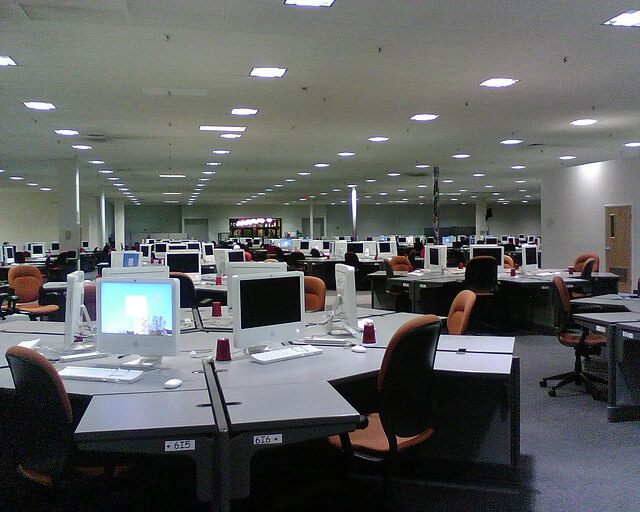 How a Math Emporium Made Me a Quitter

Nicholas DeMottSep 11, 2015
Home » Latest Posts » How a Math Emporium Made Me a Quitter
FacebookTweet

“No one likes a quitter,” everyone and their mom preached to me. Don’t quit the football team. Don’t quit on your best friend. Don’t quit in the middle of shot-gunning a beer. These words were ingrained in my mind when I entered freshman year. Well, that was before I discovered my college’s off-campus warehouse of pain called the Math Emporium—a building dedicated solely to equations and numbers. One miserable Sunday, I found myself at the emporium taking an exam, frustration boiling up inside. Shortly after, I changed my no quitting tune to Fleetwood Mac’s, “You can go your own way.”

After waiting in line just to get in, the bouncers finally checked my student ID and sent me to an open computer. I grabbed a red solo cup and placed it on top of my computer—the universal sign at the Math Emporium that you need help rather than a beer refill. A worker eventually started my exam, but after about 20 minutes, sh*t hit the fan. The entire system croaked on me—math overload would be my guess.

An hour later I continued and eventually finished my exam, and awkwardly speed-walked out of the asylum. Overjoyed to see sunlight and not Mac-light, I anxiously waited for the bus, so I could at least salvage some football-watching that Sunday.

I waited and waited, but the bus never came. As an uninformed freshman, I had no idea the bus stopped running early on Sundays, and my only option forced me to hike two miles in flip-flops back to my dorm. During this 45 minute walk past every inch of town and campus (way more than orientation ever showed), I hated everything about the school. Dumb mascot. Ugly buildings. But mainly I hated my classes. Why pile hundreds of students into one classroom? Lectures felt impersonal. I paid good money to take a math class that not only lacked a professor, but made students travel for business.

I got back to my dorm ready to kick my foot through the door and blow off class for the next few days. Instead, I let the culmination of feelings I’d let bubble up galvanize my hopes of looking elsewhere. What college would be a better fit? I fantasized with excitement. Anywhere without a Math Emporium sounded better.

Two months later—grinning ear to ear—I delivered my withdrawal papers and packed up my belongings. I was officially a quitter, and the proof was in the documented pudding. Next semester I’d take classes at the local community college. I was unsure what I was getting into, but at least I knew I was Going My Own Way. And at the very least, the students twice my age with whom I’d be sharing late-night study groups would appreciate Fleetwood Mac.

Nick is a senior English major at Boston College. The three ways to his heart are Survivor, the Baltimore Orioles and Zac Brown Band.

Previous Post:Your Guide to Fall Semester at UF as Told By Students
Next Post:8 Ways To Ace That Spanish Oral Exam