“Life is a journey, not a destination.” If I had a dollar for every time these reassuring words, often attributed to Ralph Waldo Emerson, were shared with those of us who faced an untraditional path attending college, I’d be rich. Perhaps rich enough to pay the world’s most ingenious inventors to build a time machine so I could turn back the hands of time and live out the traditional, all-American “college dream” straight out of high school. Time machines may not exist (yet), but thankfully, new beginnings do. My educational journey as a non-traditional transfer student at one of the world’s top institutions didn’t quite mirror the narratives of most of my fellow Bruins.

However, my journey certainly adds validity to Emerson’s wise words and is especially fitting considering how much I studied him as an American Literature major at UCLA.

Upon graduating from continuation high school, I felt directionless as far as academic matters were concerned. For several years, I dabbled part-time in a rainbow assortment of classes at my community college. I hungered to pinpoint the direction of my academic interests but struggled due to the demands of my full-time job.

After taking a hiatus from college and nearly giving up on my undergrad studies altogether, I decided to finally hunker down on my education and pursue what always captured my heart: literature. With a newfound passion for my studies, I crawled my way out of community college and landed at my dream school, UCLA. Now I had the opportunity to make up for lost time and live out the college dream. But where to start?

I remember my first, most pivotal dilemma. Should I live on-campus and pay the price tag for the “ultimate college experience,” or live somewhat affordably (this was LA, after all) in an apartment, continuing my all-too-familiar “adulting” routine of monthly utility bills and dishwashing? While I felt grateful for the ability to choose from the two options, I put my “transfer thinking cap” on; I asked myself, “which option will be the most fulfilling during my short time at UCLA?”

The answer was living on-campus, and it paid off well.

Not only did living in the dorm provide me with jobs that offset the sky-high cost of housing (hello, Resident Assistant-life), it provided the most organic environment to befriend others and build a close-knit community, two essential components of my college experience. Was I several years older than many of my floormates, most of whom were learning for the first time in their lives the difference between laundry cycles, or what “credit scores” meant?

Yes, but these seemingly-small instances actually pushed me to pursue my multiple jobs in student affairs helping others personally develop in college. Was it quite the eye-opener when I assumed my party days were over, only to study abroad with a group of mostly under-21-year-olds in Europe who experienced public intoxication for the first time in their lives? Absolutely!

But they undoubtedly became one of my most cherished (and entertaining!) memories in college.

Did I wind up getting a short-lived taste of being a 24-year-old “cougar” by dating 20-year-old guys during my free-time? Admittedly yes, and I’m happy to share that age became just a number after getting to know those charming fellows. Suffice to say, going to school as a non-traditional transfer student helped shape my most fulfilling moments of growth, both in and out of the classroom. Would they have occurred if I’d taken the traditional route of attending UCLA? More than likely not! I would’ve been much less driven to maximize the most of my college experience.

For as much as my unique journey shaped the opportunities provided along the way, I can’t deny the obstacles it posed.

Even now as a fresh graduate, it can be challenging to shake the feeling that I’m “behind” in life. Old friends and classmates have completed grad school, are settling down and getting married, or have begun starting families of their own–an entirely foreign concept to me.

I’d be lying if I said I didn’t occasionally ponder how different my life would be if I’d graduated at the “right age” and if my career ambitions would presently be in full-force. But while time machines might allow us to one day “right the wrongs” of the past, they’ll obstruct any chance to reach a destination if we’re only ever fixated on taking impossible linear, unchallenged paths. To all college students, I advise: take the detours–they’re sure to guarantee the most fulfilling journeys. 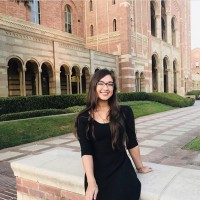 Danielle is a UCLA graduate who studied American Literature and Education. She loves to book hunt and has a special place in her heart for children’s literature and old cookbooks. In her spare time you can find her perfecting cookie recipes and playing the keyboard (unimpressively) by ear.