You are here: Home / Party / Greek Life / Behind the Scenes of Sorority Rush at a State College

Sorority rush at southern school is not to be taken lightly.

At a school like mine, it basically defines your college experience. I wish I knew a little more about Greek life before I got so excited about the idea. While it would’ve saved me some grief as my freshman year commenced, I learned a lot about myself in the process.

First, I’m a New Yorker. So, why would I choose Florida State University to begin with? New York winters are absolutely brutal. They make me angry and not quite myself. Nothing remains fun when 20-degree winds continuously hit your face. So I decided to bring the heat and attend FSU. I thought it would be my Snickers, my answer to the “you’re not you when you’re cold” issue I faced. Aside from the privilege of wearing shorts every day to class, starting new didn’t seem so bad, either.

I even heard FSU had an awesome system to meet people: joining a sorority. I could not think of anything better than having 300 sisters to rely on before school began—especially as an out of state student. Upon arriving at FSU, I dreamt of Greek life from hearing my cousin’s stories. I even watched all the movies idealizing it: endless social events, sisters for life and global connections. It sounded like a pretty good deal.

In the 95 degree weather, I arrived at FSU for rush. My Panhellenic group leader, the college student who guides us through the rush process, told me to wear the required shirt so that I’d look like the other 2,500 girls rushing. I thought it felt rather odd that I blended in with so many girls. It took away any type of individuality usually accompanied with wearing one’s own clothes.

The conformist clothing wasn’t the only bad part, but rather just the start. When I visited each house during the first round, my conversations with my potential sisters were completely monotonous. They centered around my previous summer jobs and my future major.

I kept wondering how these conversations would lead to real friendships with my so-called future “sisters”?

With 13 sororities at FSU, I found out that only about half the girls that rush actually join the Greek system. Talk about picky. At the end of the first round, my Panhellenic group leader told us that based on the discussions with the sororities the day before, we might not get called back to all the houses.

As my group leader started calling us one by one to tell them which houses they were going back to, I watched three girls before me walk away, devastated and crying. Seeing their mascara running down their eyes, saying things such as “I only got back two houses,” made me realize something: Maybe sorority rush is not all it’s cracked up to be. Their pain resonated in me as I watched these girls leave with their self-esteem lowered and their freshman year plans altered. It made me question how a system that supposedly builds friendships, supports philanthropies and even provides connections for jobs later on could do so much damage to these girls’ self-images.

When it was my turn to hear the news of the day, I started shaking. I mean, these sororities of over 300+ members never even had the chance to get to know these girls beyond a 10-minute conversation with one of its members, yet made them feel like shit. This sounded like bogus to me, so I decided to drop out from recruitment a day later.

The next few months weren’t easy.

Anytime I went out, I saw huddles of cliquey girls— the “so-called” sisters of Greek life. I forced myself to join clubs I didn’t have any interest in just so I could socialize with someone, anyone. I struggled with feelings of regret of dropping out of sorority rush because of my loneliness. All because of some judgmental system of girls I didn’t want to join, I felt like I lost myself at Florida State University.

Instead of dwelling on the negative, I focused on my grades. I stayed in a lot on weekends during my first semester. Aside from finding the solutions to a matrix or how cells perform metabolic respiration, I found a love for listening to music in those months spent alone in my dorm. It distracted me from my unfortunate reality of loneliness. It also made me aware that there’s more to this college experience than what I originally thought.

I immersed myself in my school’s music scene instead, venturing to any big EDM concert at my school. Although I attended these concerts alone, I started to meet people that shared the same interests as I did. The power of music and the people I have met through music at FSU taught me that connecting to others is possible. And for me, that happened outside of the Greek system.

Even better? Most of the people I associate with now chose not to head over to the Greek system. They also said the system was bogus, making me feel like I wasn’t the only one. In fact, we created our own form of the Greek life system together. 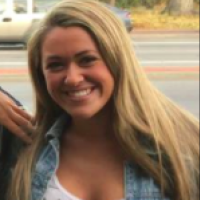 Danielle is a freshman at Florida State University. In her spare time, you can find her traveling to a music festival across the country or quoting Amanda Bynes from “She’s the Man.”

An Out-of-State Jersey Girl Living in a Florida World
Next Post: 10 Must Sing Karaoke Songs That Will Make You Famous