You are here: Home / Career / Jobs & Internships / A Look into Laila Maali’s Journey at the Givelight Foundation

The nonprofit organization, GiveLight Foundation, aims to help orphans in unstable living conditions. The organization helped countless of orphans from across the globe and Laila Maali finds herself fortunate enough to be a big part of it. Laila, mom of three, keeps a full schedule working as a personal stylist and dedicating her time to help the less fortunate through GiveLight. Her time at GiveLight taught her many lessons as a philanthropist and leader.

Read on to learn more about Laila’s journey at GiveLight Foundation.

Q: What do you know about the history of GiveLight?

LM: GiveLight was founded in 2005 by Dian Alyan. She lived through a tsunami in Indonesia and lost all of her possessions and many loved ones. Despite surviving through all of that tragedy, she felt the strong desire to give back to others. She built her first orphanage in Indonesia and that’s where GiveLight started. She currently lives in California, but still manages to maintain a successful global nonprofit organization.

We don’t limit ourselves to the one specific area of philanthropy despite predominately working to aid orphans. GiveLight’s proceeds go towards important aspects of life such as education, health services, clothing and shelters.

Q: What is your position at GiveLight Foundation and what do you do?

LM: I am the head of the Orlando, Florida chapter of GiveLight. I lead a committee where we organize events at least two or three times a year to raise money and awareness for orphans in different countries. Every event is aimed towards helping a new country and we have helped over 1,000 orphans now from all over the world. So far, I’ve been a part of organizing events for Indonesia, Mexico, Gaza and Morocco twice.

Q: What is it like to be a part of GiveLight for you?

LM: I love doing it. I’ve done charitable work for over eleven years, so like second nature for me to raise money and plan events. My committee consists of six hardworking women, but I always end up taking control as the position of the leader. I enjoy being in the leadership position, especially for an organization that aims to help so many people.

All the events that I organize are strictly compensated through donations. From the venue to the food to the auction items, everything is donated. My team and I never pay out of pocket. And of course, all money raised goes 100 percent to those in need.

Q: What have you learned from your position at GiveLight?

LM: I’ve learned the amazing feeling of being able to give back to others firsthand. Knowing that I’m helping someone even though they don’t know who I am, makes me happy in the greatest form. These children are struggling in ways many people can’t imagine, most of them without a mother or a father, but to be able to help them is not only a blessing for them but for me as well.

Q: What can others benefit from GiveLight?

LM: The feeling of giving to those in need and to be a part of that on such a big scale is a wonderful experience and very fulfilling. It’s also a perfect way to create new relationships and socialize with experienced professionals or people with the desire to help others. I’ve met so many people through GiveLight and different charities throughout the years. You gain countless connections with people who want to guide and assist you throughout this journey of helping others. There are so many people I’ve had the pleasure of meeting that I know I would have never been introduced to without being a part of GiveLight.

I actually met Dian at one of my past events and was offered my position at GiveLight. After organizing charities for free for so long, I was apprehensive about taking a new job where I still wouldn’t be paid. However, I realized that I’m doing it for the sake of God and the children in need. When you get into the field of helping out others, you don’t want to stop. Everyone involved shares the mutual feelings of fulfillment and satisfaction, along with eagerness for the next event.

Q: How does someone get involved with GiveLight?

LM: On the GiveLight website, there’s multiple options to choose from to get involved. All you have to do is be qualified and apply! It is a lot of work however, so to be a part of GiveLight you need to work hard. After doing this for so long, I’ve learned to be blunt to people who try to look involved without truly putting in the work required.

Q: What do you look for in potential committee members?

LM: To be a part of a committee you need to have a part. You need to have a job that you’re good at and that proves useful for GiveLight’s events. To receive a role in the Orlando committee, the same rules apply. Do your part and do it well. One woman on my team oversees decorating, another in charge of raffles and another with checking guests in. To put it simply, you must put in effort, work and time. It’s not easy but it’s definitely worth it.

Although having a big team seems nice, I learned that less is more. I started off with a committee of 15 members and the worst thing is having too many people. Sometimes you’re left with three people doing the job of one because you’ve run out of things to do. Five or six people was enough for me and it’s enough for any committee willing to work hard.

LM: My first event was at Bloomingdales where they donated 10 percent of all profit to charity, which was about $500.00. My second event was an auction at my husband’s restaurant. This event was much larger and we raised over $9,000.00. For my next event, I emailed Nominal because they had previously donated some jewelry for an event and it was a big hit. They sent me over $10,000.00 worth of jewelry without hesitation or compensation.

Nominal is amazing—they have a beautiful variety of Islamic jewelry and they were kind enough to donate such a generous amount for our event. Since then, they’ve been largely involved with GiveLight, providing countless generous donations.

Q: What are some interesting details about GiveLight?

LM: We recently started new chapters in New York and New Jersey; we have one in Maryland, in Paris and others all over the world. The more chapters that open, the more people recognize us and that’s the ultimate goal. We want to become worldwide so that we can help as many people as possible. I don’t think many people know how many chapters across the world Givelight has.

As we open new chapters in different states, I’ve noticed some people are hesitant to get involved due to their inexperience. The one thing that remains important is you can’t be afraid to ask for money, no matter how uncomfortable it’ll be at first. That’s one thing I would tell myself,“I’m not asking for money for myself, I’m asking for people who need it.” It was hard at first but it’s essential to bring as many people as you can into the event. I tell my committee now that they have to bring in at least five people on your own, it helps get them comfortable with the process.

Q: How has the pandemic impacted GiveLight?

LM: Covid-19 actually didn’t affect us too badly. During the pandemic, I utilized social media to reach out to people. It seems like it would be harder that way, but I would constantly post on Snapchat and Instagram with tickets at a lower cost than usual, and in doing so we got a good amount of people for those events. 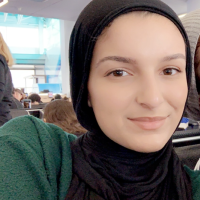 Dina is a junior and communications major at St. John's University. She enjoys drawing, watching movies and hanging out with her siblings.

All You Need To Know Before Diving Head First Into Law
Next Post: It Won’t Last Forever: How I Got Through College with a Mental Illness