You are here: Home / Life / Food / 10 Thanksgiving Side Dishes to Trick Your Family Into Thinking You’re an Adult

Side dishes are great first step into the kitchen on Thanksgiving. The pressure’s low. It’s not like you’ll be responsible for burning the whole damn turkey. Bringing the ultimate side dish won’t just impress Grandma, but it’ll get the fam to stop calling you their “little baby.” Here are 10 of the best Thanksgiving side dishes that won’t burn the house down trying to cook.

Green bean casserole: one of those dishes that looks difficult, but doesn’t really require much work (just like that online class you took that ended up having all of the answers on Quizlet). Just hearing the word “casserole” sounds super adult and impressive. I’ve definitely claimed green bean casserole as my serving of vegetables to earn my extra piece of pie during dessert, so it can serve as your go-to also if you aren’t a big fan of veggies.

While you don’t have a problem with eating Easy Mac for breakfast, lunch and dinner, your family probably won’t appreciate the super-processed cheese (especially when your aunt brings her organic, homemade pecan pie for dessert). Leave the powdered cheese in your pantry next to your Ramen and go for a homemade version this Thanksgiving. You could even buy a nice serving pan to further your claim to adulthood. In my experience, it’s pretty hard to completely ruin macaroni and cheese, so just go for it. Somebody at the table will eat it.

Mashing some potatoes is a great way to get out some of that stress that’s been building up since you saw your first midterm grade. Powdered flakes from a box are for amateurs; you can totally make your own without too much hassle. “I love having mashed potatoes at Thanksgiving dinner,” University of Texas at Austin junior Hanna Stewart said. “Especially when they’re still kind of lumpy. Then you know they’re homemade.” I always leave some of the skin on the potatoes to sell the whole “homemade” thing even more. Works every time.

Cranberry sauce straight from the can will suffice, but you’ll really impress your grandma if you can put your own spin on it. Everyone automatically thinks “homemade” if they see whole cranberries, so start there and add a little bit of cinnamon for an extra kick. At my family’s Thanksgiving dinners, someone always makes homemade cranberry sauce in addition to the typical canned option that my grandma has on hand. But the homemade version always wins out over the store bought option, trust me. Even your little cousin who doesn’t eat anything but bread for dinner will appreciate your hard work.

Pouring corn from the can into a pot won’t impress anyone. Honestly, that canned stuff won’t even taste that good compared to all the other homemade Thanksgivings foods your family has been crafting since you were a kid. Canned corn might also bring back scary memories of gross school lunches, so just avoid it at all costs. Adding some extra pepper always works for me, so don’t be afraid to experiment a little to further your kitchen skills. But don’t worry if you mess up, your uncles won’t really be able to tell the difference when they mix all the food on their plate into one pile.

I know Brussels sprouts won’t take up nearly as much room on your plate as the three servings of mashed potatoes, but everyone knows you’re not a real adult if you don’t have at least a little green on your plate. Trying some really wouldn’t hurt you; you might end up actually liking them. “I make Brussels sprouts every Thanksgiving,” University of Texas at Austin junior Madelyn Guerra said. “The trick is figuring out how to cook them just right.” Always make sure they’re tender before taking them off the stove so your relatives can’t complain. The year I brought Brussels sprouts was filled with all of my relatives telling me how impressed they were. Bringing more “mature” side dishes totally wins you adulting points.

You absolutely have to eat stuffing at Thanksgiving dinner, even if you’re already stuffed from all the other food. Making the stuffing can get a little more complicated than other Thanksgicing side dishes, but you’ll become the favorite grandchild if you can pull it off. There might be a few other variations around the table, but don’t feel defeated. Stuffing is one of those dishes that can be completely different each time. Think of it as your signature dish. If Grandma can have a world famous pecan pie, why can’t you have a world famous stuffing? Move out the way before you get chopped Grandma, there’s a new chef in the kitchen.

Beets can be classified as one of those “adult” side dishes, so bringing them to Thanksgiving dinner definitely helps you escape the kids table and join the other adults. Tossing some beets on my plate has always saved me from the “eat your vegetables” lecture that at least half of my cousins get. Show your relatives that you can be a healthy adult, even if you do eat leftover pizza for breakfast at least three days a week while you’re at school.

Sweet potatoes can be cooked in so many different ways that you shouldn’t have too much trouble whipping up with something tasty. Turning yams into a dessert will definitely please your family members, and it’s always been the easiest side wish for me. You can also eat some of the marshmallows as you’re cooking to practice your Chubby Bunny skills. There will probably be an overload of pecan and pumpkin pie, so bringing candied yams earns you major originality points.

You’re basically required to have cornbread for a successful Thanksgiving dinner. I know from experience that the cornbread can either make or break the dinner. Everyone eats it, so everyone will know if you screwed it up. Even though cornbread seems less important than the huge turkey, you’ll still hear “pass the cornbread” over and over so it’s important that you get it right. 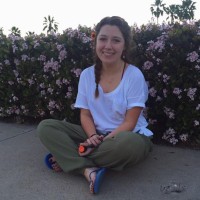 Jasmine is a junior at the University of Texas at Austin studying journalism and sociology. She enjoys sunsets, concerts, and gas station pizza.

10 Songs You Need to Add to Your Thanksgiving Playlist
Next Post: Decoding Midwestern Ice from Midwestern Nice