You are here: Home / Life / The Twisted College Romance No One Prepared Me For

Preparation: the action or process of making something ready for use or service or getting ready for some occasion, test or duty. I spent much of my youth in preparation. To achieve academic success, I devoted countless hours to studying. I prepared for each class, each exam, each assignment, one by one. To achieve athletic success, I dedicated tiresome hours to practice: preparing for each game, each scrimmage, each position, day in and day out. To master the art of writing, I committed thoughtful hours to my craft.

Preparing for each future word, sentence and story I would write.

To become a wife, I devoted dutiful hours to my traditional gender role. I helped prepare each meal, wash each load of clothes, and clean each room. As I said before, much of my youth involved constant preparation. I even prepared for how I needed to successfully navigate the world as a Black Muslim woman—a member of three marginalized communities, with three times the struggle.

So, by the time I turned 18, I truly believed that I knew how to take on the world and everything in it. In the fall of 2018, I left for college feeling nervous. Although the nerves attempted to take over me, I felt sure of the developmental preparation I spent a decade fulfilling. However, in the spring of my sophomore year, an unexpected life challenge hit me; the challenge that revealed undeniable evidence of my lack of preparation. My failed first love with my college sweetheart.

Unprepared: the state of not being ready to deal with something.

I experienced a devastating feeling of unpreparedness the day my heart broke.

The devastation continued as the days went on. I constantly Googled “how to get over someone you love,” “how to heal after betrayal,” “how to live with a broken heart” and a series of other self-help, post-breakup questions. I spent sleepless nights quietly weeping until my head felt like it was going to explode. My status transitioned from significant other, to other than significant in the heart of my beloved. It felt so heavy, as if a ton of bricks piled on my chest. I didn’t prepare for the weight of it all, and my pain was evidence of that.

Loving him felt effortless. He acted as the prince charming in my college love fantasy. Does that sound cliché to you? Trust me, I know. We met in a summer program as student leaders for the university we attended. We worked amongst over 60 student leaders, hundreds of incoming freshmen and dozens of faculty members each week.

As the blazing summer sun kissed our skin and melted our hearts, it soon felt like just the two of us.

Being together felt natural. It felt like we already knew each other for years. Our bond formed in a dimension that operated on a different time period than the ordinary 24 hours. In our dimension, time passed a lot faster. Weeks felt like days, days like hours and hours like minutes. With each second, our connection grew with passion. As the hot summer days turned into chilly fall nights, I fell for him. He became my best friend.

He was my person and I, his…until our sudden end.

“I might not be coming back next semester and I just can’t do long distance,” he said to me as we stood in the exact location where he once promised to remain committed to me for a lifetime.

Despite the sudden heartbreak, we decided to remain best friends and continue to spend time together. “Nothing’s going to change,” he assured me. Unfortunately, this took place in March 2020. So, a week later, we were sent home due to the spike in COVID-19.

Soon after we returned home our friendship, like our relationship, became nonexistent. Consequently, we never saw each other again. Fast-forward, over a year since the day my heart shattered and I am scheduled to return to university this upcoming fall.

To my surprise, he will return too…with a new girlfriend. 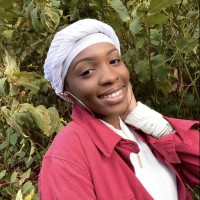 Yaminah is a senior at St. John’s University studying Journalism and Sociology. She loves writing everything from brief motivational quotes to detailed narrations. With each word, she hopes to inspire and guide people all over the world towards improvement.