You are here: Home / High School / A Thank You Note to the Colleges That Rejected Me

The word “failure” has different meanings. In a more light-hearted context, we see failure on social media as funny Vines or Pinterest fails. When it comes to our personal and academic lives, failure can define itself by our test grades, GPAs, relationships, employment/internship status and more.

So when I say that I’m writing about a time I failed, this interpretation refers to the latter. But in my case, it doesn’t have to do with a single incident.

This is about a time period during which I considered my entire existence as just that: a failure.

Throughout high school, I set the bar a little high for myself. I chose difficult classes, loaded on extracurricular activities and took every possible opportunity to make my transcript shine. When the times for the SATs, AP exams and final exams came around, I just managed to focus while balancing my social life.

But then the newest and most stressful stress of them all came along—college applications. This differed from my exams; although they would play a part in molding my future, this was it. This was the future. My entire high school career, tears and stress included, culminated with a single click of an acceptance button.

So naturally, I rolled up with the same mentality that had pushed me thus—a determined, all-in mindset. Little did I know, however, that mental exhaustion and unfairness came along with the college application process.

When I decided to pursue a degree in journalism during my junior year of high school, I began researching for top journalism schools near my hometown in New Jersey. I applied nearly all of the top 10 journalism programs.

Although I never really had a dream school, New York University caught my eye. NYU seemed like the perfect fit for an extroverted, food-loving person like me. Taking a tour of the campus the summer before my senior year of high school only confirmed this fact.

So months later, as I sat refreshing my email in a Rutgers University auditorium for my high school concert choir’s dress rehearsal, my eyes burned with disappointment upon seeing the word “waitlist.” At that moment, I felt as though the sleepless nights, innumerable cups of coffee and headache-inducing exam schedules had been for nothing.

This trend continued when I received a rejection from Boston University, a school that I felt relieved to have in my back pocket. I considered BU my safety school. Most people from my high school, myself included, held Boston University to a high but attainable standard. Seeing the rejection made me not only lose faith in the college application process but also in myself.

These were just two of the many rejections I faced while figuring out where I wanted to go and why. At this point in high school, I only knew that I would not attend Rutgers University because its journalism program didn’t rank. The last good option on my list was the University of Maryland College Park. In spite of its prestigious journalism program, I still couldn’t help feeling defeated.

I remembered loving the UMD campus, but I never considered attending. I began to warm up to the idea once I came to terms with the fact that NYU was not the place for me. I decided against placing my name on the waitlist and moved on to research the school I realized I would soon attend. The more I looked into it, the more I fell in love with the school’s program.

I still consider this point in my life a huge failure, but not for the original reasons. Rejections play a part in daily life, whether from academic programs or employment positions. I consider the amount of sleep I lost over perfecting my college essay a failure. I consider the irregular eating schedule and tears shed unnecessarily a failure. In other words, I find the fact that I let this process define my self-worth and intelligence a failure.

It’s natural to feel disheartened when something you work hard for turns out different from your expectations. In my case, I convinced myself that these rejections were a testament to the fact that I was not worthy of acceptance to a great school. That, in my opinion, is the failure here. I gave educational institutions the power to determine my capabilities.

Overall, my decision to attend UMD was one of the greatest I’ve ever made. I instantly acclimated to the academically-challenging atmosphere, great journalism program and incredible people. Looking back, I thank NYU and BU for rejecting me. If I’d chosen any other university, I wouldn’t be nearly as happy as I am today. 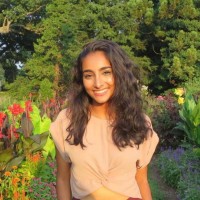 Shruti is a multi-platform journalism and information science double major at the University of Maryland College Park. She loves spontaneous adventures and is always ready to explore new food places in New York City and Washington, D.C.

My Roommate Deserted Me
Next Post: What My Move-In Day Struggles Taught me About College