No matter how confident you feel about your first roommate situation, especially your freshman year of college, people can really surprise you with their true colors. I learned this the hardest way of all, having to switch dorms not once, but twice during my freshman year to get away from toxic roommate situations—and let me tell you, I wish I had chosen to live alone much earlier.

I met my first roommate the “modern traditional” way, through exchanging information on Facebook Messenger.

The fact she seemed to match my personality and interests didn’t strike me as odd at all. We arranged to meet at the same orientation session over the summer to get a chance to hang out, and nothing seemed off about her except for some people calling her hyper. When move-in finally rolled around one of the first things my now ex-roommate said to me was, “I’m so glad I don’t feel obligated to be friends with you.” WTF?

For the first several weeks of school, I barely ever saw her between her constant going out, school and her job. When I did see her, she was always throwing temper tantrums—like, to the point where she would be howling on the floor because she, “couldn’t find her phone”, which she would later discover in her bed, or because her mom was, “too clingy” for calling to check in on her. In a lapse of judgement that would later haunt me for the rest of my college career and in attempt to make her feel better, I invited her to go with one of my best friends from high school and I to Home Depot to get some succulents for the dorm. Later that night, she started sobbing almost incoherently about a past relationship that she had, and how she wished she could date a frat boy for the sole purpose of ruining his self-esteem by dumping him just to make herself feel wanted. The logic of her thinking escaped me as much then as it does now, but I did find it odd that she brought this up after my friend had mentioned he was going to rush a frat within the next few weeks.

From that point forward, she made it her goal to get with my friend.

She made it evident that she did not care what I thought of the situation. She planned to pursue him regardless of my opinion. I pleaded with him not to cave in to her, warning him that she was just using him and his response was something along the lines of “eh, crazy girls can be fun sometimes.” Over the span of their awkward pre-dating stage, she began to get nastier and nastier towards me. Her grades were in decline due to her perpetual inebriation and overwhelmed by the mere thought of taking responsibility for her decisions, she decided to tell our RA that she couldn’t concentrate on her schoolwork because I occasionally had friends over to our dorm. Around this time, I also discovered that she had been tweeting false, mean comments about me. To preserve my mental health, I decided the only viable option was to just remove myself from the entire situation by moving in with another friend I had met during orientation.

Boy, did that work out great too.

My second roommate was the polar opposite of the first, equally crazy but in a way that was manipulative and possessive. She persistently texted me throughout the day to make sure I wasn’t doing anything without her. This would not fly, because I had recently joined an organization that I intended to be super involved with. Every time I would make other plans, she would get so enraged that she would actually call her mom in front of me to tell her that I was doing things without her. I wasn’t allowed to have my own life.

But it wasn’t all talk. She went on to scare me several times before I couldn’t take it anymore. I was stuck between wanting to “fix” her somehow and being mentally tormented everyday living with her. After going out with my boyfriend one day instead of hanging out with her, she was oddly silent. I returned to my dorm and noticed it was even more silent. To this day, I don’t know what possessed me to check under her bed, but that’s where she hid. We were both equally surprised to see each other. I don’t know if it’s scarier that I thought she might be hiding under her bed, or the fact that she actually was.

One of my friends, an RA, eventually gave me an ultimatum.

Recognizing that my living conditions were unstable, he told me that I would have to go talk to my RA or he would do it without my permission. I had tried so hard not to move a second time that school year, but I suppose it was inevitable. I finally ended up moving to a dorm where I had three roommates but a separate bedroom, which was great. Not everyone has as terrible of an experience in the dorms as I did, but I can say I’m relieved to be in an apartment now with people I can trust. 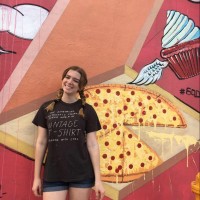 Sophomore English major at the University of Florida. Lover of YA fiction, puppies, Nintendo, and indie / alternative music.

Don’t Tell My Parents That I Adopted a Street Cat
Next Post: How to Become a Full-Time Writer