You are here: Home / Life / Dating / From Alone to Happy in Three Days

“Who’s this?” my roommate, Alexis asked as she looked at the guy standing with her co-worker. “Oh, I’m Matthew,” he said, waving his hand and looking over at me as I leaned against the wall in my kitchen. His smile was gorgeous, and I already had a feeling there was something more to this guy that just walked into my apartment. I came to find him attractive, funny and—after a round of the Mexican Train Game—as someone I would like to be with by the end of that night. We traded Snapchats and when I woke up the next morning, I found a good morning message waiting for me.

It was something so small yet, something that made my entire day.

After that first Snapchat message, hundreds more followed as we got to know each other throughout our day. By the time my best friend and I were out grocery shopping, I was full out crushing on this guy and it hadn’t even been 24 hours since meeting him. Something about him made me interested, kept me wanting to find out more and spend as much time with him as I could. We saw each other for a whole two minutes and it was like my day got even brighter. I wished him goodnight and when I woke up again in the morning, there was another good morning message and a giant smile on my face.

By the third day of knowing each other, I was pretty sure he felt the same about me. When I still wasn’t sure, the eight hours we spent together that lead to us holding hands and admitting our feelings made it clear. We stayed up talking until 4 a.m. and by the time he left, my heart was soared from my chest.

By the next weekend, we were officially boyfriend and girlfriend.

See, I’m already in my third year of college with plans to graduate within the next year, but my boyfriend is a year behind me. I’m okay with this, but now that there’s someone else in my life,I have to think about how my future can involve him.

My original plan had been to go to the University of San Francisco for my master’s degree in Fine Arts. My plan now? I don’t know. I wanted to run away from Wisconsin as fast as I could and never look back, but with my boyfriend by my side, I’m not entirely sure that’s what I want anymore. Am I giving up on my big dreams? No, I would never. Am I adjusting them to make sure he can fit? Yes.

Instead of San Francisco, I’m looking into schools closer to Wisconsin like Iowa State, University of Minnesota-Mankato and University of Illinois.

With any school I consider now, I look at what the teaching market is like around it since Matt wants to be a teacher. Instead of thinking about how I could do this on my own, I look for how Matt and I can be a team. With him by my side I know that my big dreams aren’t really that big, they’re just slightly out of my reach right now. Have we had to deal with some drama? Yes. Have we gotten through it with flying colors? Absolutely.

I know the road ahead of us isn’t going to be an easy one. Not only will I graduate before him, but we also live in different places during breaks. While that drive isn’t extremely horrible with him only living an hour away, it’s still an hour away. Winter and summer break will really test us and show us if we can make it through my grad school years. However, we have pretty good communication if I do say so myself. With technology on our side and the ability to see each other when we have time, there’s nothing I feel like I can’t talk to him about.

Has being together made me reevaluate what it means to live life? Yes, and in the best way possible. I’m working more on myself so I can be the person that he loves. I try not to stress out as much and before stressing out, I think about the ways I can solve my problem. If I do end up freaking out, I know that I have Matt to help calm me down. He’ll help me look at the problem in a whole new way. Heck, it was taking me 20 minutes to build a shelf the other day and he came over and built it in five minutes.

We work together and that’s really what being together is all about for us. While it’s nice to spend time together—cuddle and all that—it’s also nice to know that there’s always someone there to back me up.

We’re a team and we’re the greatest team I think I’ve ever seen.

Will we fight? Most likely. Am I willing to fight it out until we both agree on something? Yeah. Am I hopelessly in love with this man? Absolutely. It doesn’t matter where we are in the world or on-campus, I know that we’ll get through things because it feels right. It feels like he’s the person I’m meant to be with. Do I want to fight and scream at him for the smallest things? No. Is it gonna happen eventually? Yeah.

The thing is though, we still love each other and I’m willing to fight every day if it means that I get to spend my days with him. If that means that I end up in San Francisco while he’s teaching in Des Moines, then so be it. I’ll take the road back to him with the bumps and potholes that come with it. If it all crashes and burns halfway through, then I’ll pick myself back up and try to make it back to him in one piece.

What makes me so sure? My heart tells me that I can’t live without him anymore and that it’s all worth it in the end. I’d rather be happy with him than be alone and wondering when my happy days will come. He’s worth it. Is that cheesy and sappy? You bet. Am I probably just talking out of sheer happiness and love? Absolutely and I don’t mind it one bit. 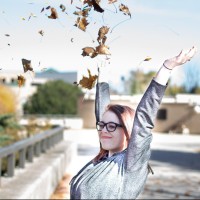 I Bought a Lesbian Wedding-Cake Topper to Annoy my Roommates
Next Post: From Knowing Everyone to Knowing No One