You are here: Home / Party / Dance Floor Predators: Dealing With The Groin Approach

We’ve all been there. You’re dancing at a party and trying to have a good time with your friends when, all of a sudden, a boy’s chubbies are attacking you from behind. You meet his groin before you meet him and you honestly didn’t agree to either encounter. But you bear with it, looking forward to a future sans-butt attack because what else can you do?

For a while, this seemed to be the only thing I could do. Hell no was I turning around to say, “No thanks, I’m not interested.” What gave me the right? And so my freshmen year came to a close with a whirlwind of weird memories and some seriously chafed buns. I began my sophomore year the same exact way.

Then one October night, my friend Nicola and I decided enough was enough. It was time for a little social experiment (Bless psychology majors for their natural inclination to conduct these sort of things). Nicola has an uncanny ability to push her stomach out to a point where she looks eight months pregnant. It’s really quite impressive. Alas, a plan was born. We thought her inflated belly was a perfectly suitable equivalent to a boy’s groin, just as forthcoming and unappealing. And so we armed ourselves with pumps and a plan.

Once we arrived at the gross mod party of our choice and surpassed the familiar barrier of “Who do you know here?,” Nicola aggressively approached the next boy she saw and rubbed her belly on him. Didn’t ask, just approached and rubbed.

He had the same exact reaction that we girls have during unexpected attacks. He looked confused and then just indifferent– like a weird, sexualized version of carpe diem– and then, the climax: He just walked away. Once he realized that some girl’s stomach rubbing up on him wasn’t sexy or in his best interest, he left. Without any hesitation.

Now, this was some incredibly interesting stuff. On the walk home, we reminisced on our little social experiment as both empowering and deflating. On one side, who would have guessed the solution all along was just to leave? It was that easy. Just use your own two feet and go. On the other hand, these guys had the confidence to walk away from something as harmless as a stomach. Most girls can’t walk away from boys’ groins when even the word is gross to be around. What is wrong with us?

We came to a fine hypothesis. While women are often situated into the role of defense in the hookup world, men are usually on the offense, actively deciding when and how they approach someone. The real take-home message was that it’s OK to say no. Just as the guys that Nicola danced up on had every right to walk away–without an explanation or defense–we possess that same right when the roles are once again reversed.

Of course, saying no isn’t always an easy thing to do, and I can’t say I never reverted back to the Bear-With-It Method, but this little social experiment led me to a big revelation: Women don’t always have to be the prey. We can be predators. We can approach guys, we can say no to guys, we can drink jungle juice or say “Oh, God, never again” to it. The only thing we have to do is remember that we don’t owe anything to anyone at a party– guy, girl or crazy roommate. 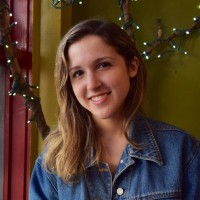 Liz Holman is a junior at Boston College, studying Creative Writing and Psychology. She has a passion for storytelling, art and people. She likes to spend her time brunching, but only when it includes bottomless mimosas, and hopes to one day make NYC her home.