Check out our latest ranking of the top 10 schools for bros 2014.

Bro: [br-oh] noun – A species of male ages 17-24 who can often be seen sporting a lax pinny, oversized Nike Dunks or Sperry’s, and cheap sunglasses from the 90s. They usually travel in packs officially known as fraternities, and use brocabulary like “legit” and “f*** that noise.” At a party, bros can be found icing other bros, eating brotato chips and talking about how drunk they are.

Don’t get me wrong; this is not to say anything negative about bros.  After all, they make us laugh and they also make us cry when they accidently spill beer on us (although I was wearing a sheer white T-shirt so I’m suspicious about the ‘accidently’).

Here at College Magazine, I’ve researched top ranking sports teams with passionate student fan bases, raging tailgating events, Greek life and meat options in the cafeteria (okay, not actually that last one). With this information, I’ve comprised a list of the top ten schools for bros:

With a basketball team like U of A’s, there’s bound to be some crazy bros in the stands cheering them on. “There are a ton of bros here because Greek life is huge at U of A. They all wear those plastic wannabe Ray Bans, tank tops, shorts and those high socks with lace up Vans. They also wear ‘I Heart Boobies’ bracelets…but not because they support cancer, it’s cause they just really like big boobs. They sport their fraternity tanks a lot, but if not they wear RVCA and Obey,” said University of Arizona junior Shayna Sanderson. University of Arizona is well known for its insane tailgate parties in the sun and its popular Greek life parties and events. Perhaps the sun really has gotten to their heads…

Located in the heart of Durham, North Carolina, Duke is without a doubt a university well known for its bro-dom. This school, which ranks number 10 on U.S. News and World Report’s list of top universities in the country, is home to the ‘intelligent’ bro. One can witness these bros in action at Duke’s rowdy basketball games. The bros camp out in tents for weeks in Krzyzewskiville just to see a game that isn’t even considered big. “Bros here wear dress shirts with shorts. It’s a classic look; it says you try to look nice but really don’t give a crap either. They also sport work boots, snap back hats and Patagonia vests,” said Duke University junior Alex Groszewski. Before football games, bros at Duke tailgate by wearing obnoxious costumes and participating in a long-standing tradition of spilling beer on one another. After one tailgate got a little out of hand when a non-student got sick, the school threatened to ban this Duke ritual. Their obsession with basketball and lacrosse may make these guys bros, but hey, these secret geniuses may be your bosses someday so be sure not to call them “Crazies.”
3.) Michigan State University

Picture this: a football stadium packed to the brim with bros dressed in green and white, shouting at the top of their lungs for their Big 10 team. Meanwhile, thousands of other bros who were too drunk to actually make it to the game are still partying in the front yards of their huge mansion fraternity homes. Tucked among the farms of East Lansing, MSU is a huge Spartan nation of about 45,000 undergrads, with at least half of those being bros. “The bros at MSU like to live young, wild and free all day, everyday,” said MSU junior Rachel Dickerman. “There is no party like a Tuesday night party for bros.” There are only two words that can totally describe these bros: Sparty on.
4.) Penn State University

Bros at Penn State University can often be seen around campus yelling “WE ARE” for no apparent reason. But Nittany bros know to scream “PENN STATE” at any point in time that they hear that phrase. Found in University Park, Pennsylvania, Penn State is known for its overwhelming school spirit. Bros go absolutely nuts for the school’s sporting events, and will do anything for the team. During the recent scandal involving beloved football coach Joe Paterno (need I explain?), bros here were devastated to see him go. A very small percentage even felt the need to start a riot in support of the coach. Although this may give Penn State bros a questionable reputation, it’s important to know that most bros there will not accidentally tip a van over on top of you.
5.) Ohio State University If you’re a guy who is not involved in Greek Life at Alabama, no offense but you’re kind of a nobody. This Tuscaloosa, Alabama, school prides itself on its extremely active fraternity life. And with every fraternity comes a few southern bros. As one of the first public universities of the 19th century, Alabama has been producing young bros since 1831. Their mascot is the Crimson Tide, and if you don’t say “Roll Tide” at football games, you might as well kick yourself out of the stadium.
7.) University of Mississippi (Ole Miss)

With a mascot like the Rebels, how could there not be bros at this school? Located in Oxford, Mississippi, Ole Miss has what I like to call the “southern gentleman” bro. I know what you’re thinking: how could “gentleman” and “bro” be used in the same sentence? Although these Rebels have all the makings of a bro, they still learned a little something from Mama about good ole southern manners. 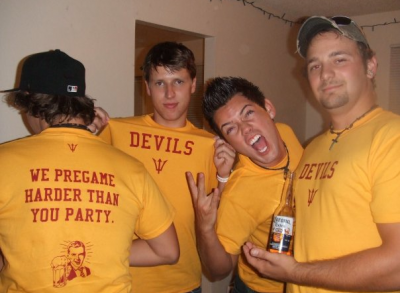 Currently the largest university in the U.S., Arizona State has the “Sun Devil” bro. They may be tan, but don’t mistake these bros with Guidos or you could get yourself beaten up. This Tempe, Arizona, university is often described as the biggest party school in the country. Most of the partying here in Tempe is thanks to the amount of bros roaming campus. "The bros who are in the frats here do the whole one-handed half hug and wear the sunglasses with the backwards hat and the tank tops with board shorts, sandals, and are always riding a long board,” said ASU junior Candice Warner.

At the University of Delaware in Newark, being a bro does not necessarily mean attending the biggest party school or having the best football team; it is a lifestyle. The bromunnity at Delaware basically runs the school so much you’d think Sperry’s were permanently glued to their feet. They may live in a small state, but their backwards Ralph Lauren caps and general bro can be seen and heard for miles. What’s a bro list without a “beach” bro? Located in Coral Gables, Florida, the University of Miami is where bros can be seen wearing swimming trunks and holding surfboards year-round. Sporting a sunglass tan and skipping classes for the beach, bros at Miami live the epitome of a chill, bro life. The Miami Hurricanes fill the Orange Bowl Stadium for every football game and can be seen having bonfire tailgates on the beach. “Bros here have a frat boy attitude. They wear sunglasses with backwards hats, V-neck T-shirts, boat shoes and board shorts. They have a ton of money and are willing to show it off,” said University of Miami junior Ethan Cloutier.

For a sport devoid of bros, check out our Top 10 Schools for Quidditch.