College kids love Halloween. But while girls tend to throw on the sluttiest outfits possible, guys just put on a white t-shirt and call themselves ghosts. Booooring. Change up the typical lackluster Halloween costume norms with these creative group costume ideas. You and your friends will be the talk of the party.

Check out all the Halloween group costumes you need on your insta feed asap.

Make sure the song your iPod costume displays is one suitable for dropping it low.

Take the bathroom to the party. You can scrub-a-dub-dub your way through the sweaty frat crowds.

No one will miss your yellow shirt and overalls. Maybe a few drinks in, you’ll talk like a minion, too. Let’s not forget about your owner, Gru.

What better time than Halloween to break out of your shell?

Crayons were an important part of childhood, so why not bring them back and make them a bit sexier? You and all your friends can choose your favorite colors: simpler than a free printable coloring page.

Get ready to tease your hair, throw on your tightest black pants and pink jackets and boss all the guys around. Not only will you and your friends look hot as Pink Ladies, but you’ll also be Queen Bee for the night. As the girls in Grease say, “Let’s go get ‘em.”

And don’t forget about the boys from Grease, by your side the entire night in leather jackets.

Just make sure no one “slaps the bag.” You wouldn’t want to start a bar fight. This costume is perfect because you can show up with your own alcohol and people won’t think you’re strange.

In today’s day and age, all anyone in college cares about is live-Tweeting AHS and Facebook stalking. This costume is not only different and cute but you may also gain some followers. It’s all about the following to follower ratio.

The infamous college game in costume form.  You can either dress as the whole game…or get 20 people and each be an individual cup.

Everyone knows the gruesome English nursery rhyme, Three Blind Mice, but I bet you didn’t know that it makes for a darling costume for three. Grab a gray T-shirt or crop top, hit up your local Halloween store for some ears and pick out your fav shades for a night out fetching candy. I mean, only during Halloween can you wear sunglasses at night in the name of fashion.

Ever wanted to be a cheerleader? You, too, can channel your inner Isis (Gabrielle Union) from the film Bring It On. “It’s from such an iconic movie so it’s recognizable enough to even stand alone,” said University of Florida senior Olivia Brown. The fashion blogger “knee-pop” may be the secret to getting those hundreds of double-taps in this 2000’s uniform.

Hi Ho, Hi Ho, grab seven of your buddies for a fairytale Halloween. You’re sure to find a friend that fits in with happy, grumpy, bashful, etc, and if you can’t, maybe that friend is… you. Assign each member of your squad a dwarf and pair an oversized shirt with leggings, a belt, and a beanie.

If you’re planning the ultimate squad group costume, you’ll definitely want to pick this costume up. Help trip up the forces of evil as a group of these ordinary teens, and then break it down on the dance floor. GO POWER RANGERS!

Capture the essence of the five members of everyone’s favorite cartoon family. “We wanted to do a group costume that was cheap, easy to do and last minute,” said recent Florida State University grad Scarlett Dunkley. “We only had to spend money on accessories like a fake mustache and aprons.” And Ta-da,  a costume complete, with a few extra bucks to spare!

What we want, what we really really want is… Halloween candy. With a red apron and some fun labels, we’re sure that your friendship will never end with this pun-intended funny costume. Add a red firefighter hat for some extra pizazz.

It’s time to spice up your life by becoming an outlandish British pop star for a night. I mean you already know all the words to the Spice Girls tracks, so you already have half your costume nailed. Plus, the costume’s timely, too—the girl group just announced a 2019 reunion tour, making it the perfect time to bring back this iconic group Halloween costume.

Celebrate this super family’s 2018 return to the big screen with some super easy DIY costumes. “You only need a few cheap items to be recognized as Violet,” said Florida Agricultural and Mechanical University sophomore Yamani Kennon. “Unless she’s using her invisible power.” And who doesn’t love an easy DIY?

19. Orange Is the New Black

Dress up as the favorite inmates from the hit Netflix series, Orange Is the New Black. Thanks to nursing scrubs, this one recreates easily and for anyone on a serious budget, proves cheaper than buying the show-specific outfit from the costume store.

With black outfits, masking tape, and some poster board, your posse can be the main talk of the block for the night. Or maybe years. Strike a pose and stick your pic on the back of a minivan for authenticity when posting to your IG feed.

Become sweet, sassy and powerful in these colorful costumes. “They were three girls who made it their business to save the world while also being cute,” said University of Florida junior Ashley Garner. “I mean who wouldn’t want to be them? They’re legendary!” These adventure-loving ’90s superheroes brought so many memories as children, so why not make some more in college?

If you want a last-minute costume that will still have you super on-trend, these outfits should be your go-to. A large white tee and some paint can give your squad an original costume with a small amount of DIY work.

These once very popular comic strip characters are the ultimate couple’s costume. Dress as everyone’s favorite pair: the spinach-loving sailor and his main squeeze, who he often had to rescue from his nemesis Bluto.

Watch out for the flashing paparazzi lights as you roll up to a Halloween party as the Kardashians. With some nude athleisure and Yeezy style, get ready to pose for lots of selfies. For extra star points, have a friend go as North.

With colorful wigs and nude outfits, this Troll doll costume idea throws it all the way back to the iconic ’90s toy. Don’t leave your house without a gemstone belly button and a pillowcase for all the candy you’ll collect.

Halloween isn’t complete without an awesome superhero costume. Team up with Iron Man, Captain America, Thanos, Black Widow, Black Panther and all the others when it’s time to save the world on Halloween night. Are you up for the challenge? Don’t worry if your arms aren’t quite ready to be shown off just yet. Find a Hulk costume with built-in muscles!

Dress up as Wayne and Garth to embrace your inner dudes. Any true fan will easily recognize these simple outfits you probably already have in your closet. Imagine how fun it would be to totally take on their personas for the night.

Leave it to Disney-Pixar to create characters perfect for the impersonation of moods: dress up in red for Anger, purple for Fear, yellow for Joy, green for Disgust, and blue for Sadness. (Disclaimer: you must be able to pull off the facial expressions).

When you need a last-minute Halloween costume, who you gonna call? Ghostbusters! Only have a friend group of girls? No worries, grab your besties and pay homage to the new all-girls crew. 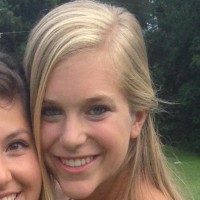 Leigha is a Sophomore at University of Florida studying Sports Management with a minor is Mass Communications. She loves to write and hopes to pursue her dreams in sports writing.

What Halloween Means to a College Woman
Next Post: I Enjoy My New England Fall Traditions Even More In College