Basically Everyone Is Celebrating March Madness Upsets With UNC

March has arrived and we all know what that means: madness. The NCAA tournament makes everyone a basketball feign whether cheering for their school, alma mater, a local school or the underdog.

You can’t go anywhere, let alone a school in the Sweet 16, without overhearing bracket talk. “In Chapel Hill, game days are like holidays,” said University of North Carolina Chapel Hill junior Kristen Luft. “Franklin street is packed with alums and families and students. Nearly every restaurant and bar in town is full with people from the start of the day waiting for seats to watch the game.”

The NCAA championship shapes up as the toughest title to win because of its “one and done” style elimination. A lot of disappointment comes with losing in any round of the tournament. But the sting of losing in the final game never really goes away. That’s what happened to the UNC in last year’s championship.

The Tar Heels fell to the talented Villanova University team by three points in the game’s final moments. Kris Jenkins, a junior at the time, hit a miraculous three-point buzzer beater to give Nova Nation their second national championship in school history.

The Tar Heels have won five national championships, the last one being 2009. Seven years waiting, UNC students gathered on campus in the Dean Dome to watch the game on the big screen as it streamed live from Houston, Texas. “I remember a ton of people had run down to the court to get closer to the screen during the final seconds and people were standing up apprehensively and then the final buzzer rang and the entire stadium went silent,” said Luft.

Let’s just say that Tar Heel fans didn’t take the loss very well. “Last year was a nightmare… As we waited for an Uber to come and take us back to the dorms, two of my guy friends were just laying on the ground crying,” said UNC sophomore Elizabeth Jackson.

This year, a lot of people picked UNC to make it to the championship again—except this time, they would win. The team has several star players including ACC player of the year Justin Jackson. The junior forward led North Carolina to their 29-7 overall record. The Tar Heels now look towards their ultimate goal as the seventh seed heading into the Sweet 16.

No road through the tournament is easy, but anything can happen. Nobody thought defending Villanova would get knocked out in the second round. But they did.

“No one really wants to talk about us winning yet just because the loss from last year was so devastating,” said Jackson. “There is a lot of nervous tension running through campus as we wait and see what happens later on in the tournament.”

UNC students still feel salty towards Villanova. Twitter captured all of the hilarious celebratory tweets when Nova got knocked out of the tournament.

Even the offensive assistant coach of UNC’s football team got in on the trash talk.

To sum it up, people care. Many people, even those outside of North Carolina, hope UNC will bring home the win. “People on campus are always so supportive of our team and since we’re the only ACC school to make it to the top 16, we’re super excited,” said Luft.

So many can relate to a time in their life when they were so close to achieving something and watched it slip through their fingers. We feel you, UNC.

“Having Duke and Villanova lose in the same round? Perfection,” Jackson said. And while UNC can celebrate their opponents’ upsets, the team still needs to keep their head in the game. Too much confidence could become detrimental to the team’s outcome. “That is the mindset that causes these sudden upsets,” Jackson added.

Staying humble and focused will be a major key to success for the Heels in the tournament that has once again captivated the nation.

Here’s to hoping UNC doesn’t make it all the way for another last-minute tragic upset. 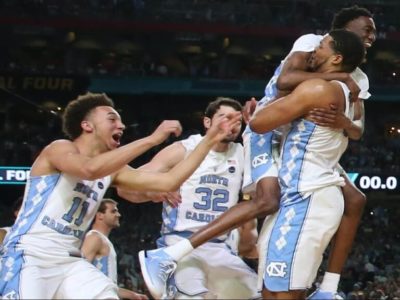 The Tar Heels Can Finally Breathe After Their March Madness Redemption

10 Campus Rep Jobs for Your Favorite Brands
Next Post: Going Vegan: A Test of Fortitude