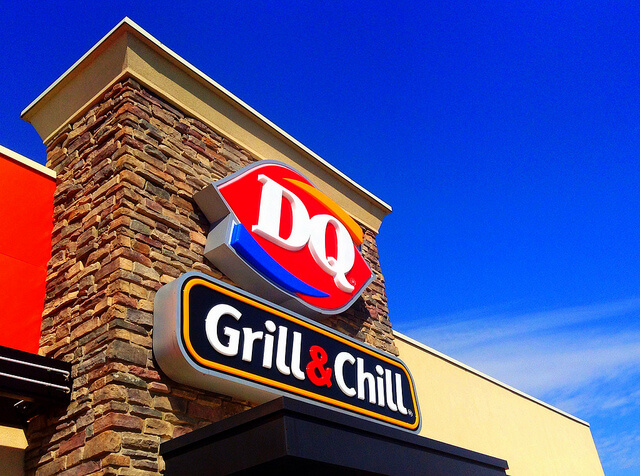 “What’s A Dairy Queen?” A Sweet Tale of New Experiences

Starting college includes some pretty standard trials: getting to know your roommate, being away from family, figuring out your school schedule…finding out what a Dairy Queen actually is? OK, so maybe my start wasn’t as standard.

Though I’m an American citizen, college was the first time I lived as a resident in America. A type of military brat, I was born in Panama City, Panama to parents who work as teachers for the government-run schools on military bases overseas. When I turned four the bases in Panama began to shut down, and my family was relocated and stationed even further from the states, in Heidelberg, Germany. Heidelberg became my home, and I lived there through high school, experiencing the weird mixture of German culture and American military life.

Even though I hold an American passport, my experience with the country was noticeably slim. Growing up, the U.S. was an enigma that nevertheless played an important part in my life. In middle school drama class I performed in a group pantomime skit, acting out scenes drawn from a hat. Looking down at the slip of paper that my group was given, I saw that my role was as “a cashier at Dairy Queen.”

Immediately confused, I searched the paper slip for more hints. Stumped, I loudly and rather bluntly asked my group mate the question causing me such a roadblock: “What’s a Dairy Queen?” The drama class went silent and most students stared at me, astonished. “You’ve never been to a Dairy Queen?” my partner asked in return. Shrinking back into myself, I could only respond with a shrug that translated to, “Nope and apparently I’m missing something.”

After hearing the embarrassing story, my parents were just as surprised as my class and made it a priority to visit a Dairy Queen the next chance we got. Every other year, the military paid for my family to fly back to the states to visit relatives and friends. When I finally made it to a Dairy Queen on one of these trips, the satisfaction of experiencing the American treat was unexpectedly overshadowed by my excitement as I viewed the large flashy menu.

Unfortunately, this was short lived as I realized I would only get to try one or two items before heading back to Europe. These trips were a whirlwind of fast-paced culture and bright images that transformed this country into a magical place that seemed to appear and disappear out of thin air. Knowing that one day I would possibly end up leaving the familiarity of Germany to go study in such a tantalizingly unknown place captured my imagination as a kid.

Fast-forward a few years, I finally took that momentous leap across the pond for the long haul. I’d been accepted to attend Florida State University. After summer ended, my family traveled back to Germany and I moved into the dorm that would be my home for the next year. To be honest, it didn’t take long for the shiny veneer of an exciting new experience to wear off as my anxiety reached new heights.

One by one, the obstacles ahead of me materialized in a monstrous pile that grew more frightening. I encountered the normal hurdles of starting a new school system while learning how to live on my own, but with the added bonus of my inexperience with the country and lack of a single familiar face. I was even nervous around my new roommate, sure that she wouldn’t have the patience or desire to help out someone like me, being a Floridian herself with friends that also attended the school. How was I ever going to cope with the chaos?

Initially bonding over trivial things: YouTube surfing sessions, Photo Booth silliness and of course, trips to Dairy Queen, my roommate and I began to talk more, often about our problems and fears. I learned she was also trying to figure out her path, dealing with a long-distance boyfriend and getting used to moving from her hometown for the first time. Ironically, we both bottled it all in and tried to deal with it alone, despite having someone nearby who just wanted to help and be helped. Realizing that we were both just as confused as the other, we began to work with each other to try and learn how to survive on our own.

My roommate became my first friend at college and continues to be a close friend today. In exchange for patiently helping me adjust to American life, I taught her how to deal with suddenly being distanced from friends and family. Four years later, I’m a long ways from that little girl who didn’t know what a Dairy Queen was and the teenager suffering from extreme culture shock.

Looking back as a self-proclaimed statesider and soon-to-be college graduate, it turns out my experience with a new culture didn’t just start and end with the physical flight from Europe to the U.S., the act of starting college or reaching out to a potential friend. Even today, I continue to find new things that confuse and excite me in life, and I’ll keep “hopping that pond” with a little less fear…especially, if there’s a DQ Blizzard and a new friend to share it with waiting on the other side.