You are here: Home / Life / LGBTQ+ / I Was the Guy in a Girls Dorm, But It Wasn’t What You’re Picturing

Being a guy in a dorm surrounded by friendly, beautiful women sounds like a dream come true. At least for a straight guy in an 80s sitcom who didn’t have to share a bathroom with everyone else. Can’t you picture it? The bumbling nerd somehow ends up in the girls’ hall. The girls dote on him. He gets into wacky shenanigans. He stands up to bullies with the help of his new girl posse, one of which is probably leaving said bully for the nerd.

It would all be wonderful—until he reaches the showers.

Now, in a movie, lazy writers would slip in sexist jokes about peeping or a slew of moments of objectification. But, this is real life. Our real hero, me, is instead awkwardly wrapped up in a towel, shuffling along while trying not to make eye contact with any of the rightfully uncomfortable girls in the restroom. One girl in particular gives him the stink eye, sizing up the towel wrapped tightly up to his chest.

That would be on account of the breasts under the towel, but you’d need laser eyes to notice them with how tightly I held that towel. You could call my arrangement an “accident of paperwork.”

My on-paper gender situation unfortunately collided with the real life one in miraculously awkward ways.

My legal papers said “female” and a name I hadn’t used in years. And my face, mannerisms and new name did not match that. I realized I was transgender a few years before college. I first socially transitioned from female to male by changing my clothing and hairstyles, then beginning my physical change with hormones. For some people, one or the other’s enough.  But I preferred both and wasn’t going to wait until the end of freshman year to continue my journey.

Waiting had already taken a mental and physical toll on me. My high school graduation wasn’t a day of happiness and relief. I went through the ceremony. My high school forced me to wear a girls’ robe and I had the unfortunate pleasure of having my chosen name called out as a middle name as I walked on stage.

My high school had other transgender students. After the ceremony one of the students (transitioning from male to female) let me switch caps with her. I kept that cap in my dresser drawer by my bed the entire summer before college, miserable over the fact I wasn’t going to get my fresh start. I wasn’t allowed to, and honestly wasn’t ready to begin hormones until some therapy. That meant waiting until I was in college.

Fear of not being accepted wracked my nerves. Would my new classmates accept my change? I’d only come out in my last year of high school. It hadn’t been too hard, as I had a tiny group of friends who accepted me. With college looming on the horizon like a dark storm cloud rolling in the sky, I grew more afraid every day.

Fast forward to right before I encountered stink-eyed girl, to the day of my first hormone injection. When you go from female to male, generally you take testosterone via a weekly injection. This basically makes you go through puberty again. For me, male puberty.

My resident assistant, a soft-spoken lesbian from the sculpture department of my university’s art school, sat across from me in my dorm as I did one of my first self-injections. My roommate hopped out of the room since needles terrified her. But it didn’t hurt at all. The RA smiled as she watched me and I smiled back.

My roommate didn’t mind our set up, even though she basically had to live next to a 15-year-old boy. The girls in the dorm didn’t revile me, either. On the contrary, I made wonderful friends.

The dark storm clouds that built up over my head dissipated throughout my first year of college in that tiny girls’ hall. A good sense of humor and an awesome support system helped me make it through what had looked like an oncoming storm.

I’ve been on testosterone for three years now. I feel happy and confident. I left dorm life a while ago and now live in an apartment down the street from my campus. The people I knew during freshman year, though I don’t see them often now, played a vital role in my current happiness. Being a guy in a girls’ dorm wasn’t exactly a dream come true, but it was far from the nightmare of a ruined “fresh start” I anticipated. 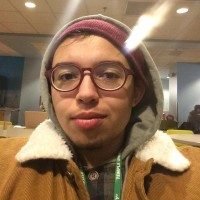 Lawrence is an artist living and working in Philadelphia. He's a Fibers major at Temple with a minor in English. He owns several glorious house plants.

From Division 1 to Division None: How a Drunk Driver Changed My Course
Next Post: 10 LinkedIn Tips to Make Your Profile the Star of the Show