You are here: Home / Life / Money / The Dow Jones in Plain English

If students complain about any part of the American education system, they typically voice their dissatisfaction about one thing: the lack of financial education. Taxes, credit scores and basic budgeting can easily mystify students, even those attending top-ranked universities. But no topic confuses students more than the stock market. You may think that only “finance bros” have access to this type of knowledge, in which case, you think incorrectly, my friend. When you hear terms like “the Dow Jones,” you deserve to know what it means too.

Read on for everything you need to know about the Dow Jones.

Life gives people lemons and entrepreneurs make lemonade. If you give them money to make their lemonade better, you become entitled to a return on investment. The lemonade company then pays you that return as a dividend. You can choose to either spend that dividend or you can reinvest it, thereby increasing your stake in the company.

“Think of the stock market like a lemonade stand. If the owner makes lemonade at a total cost of $1 and sells it at a price of $2, he makes a dollar in profit. [If] I give the owner $10 to expand his business in return for 10% of the profits, [then] the owner is able to produce a better lemonade at a lower cost but can sell it at a higher price. This benefits us both,” UCLA junior Sibhi Nandan explained.

Bigger stakes can bring you bigger rewards but, it can also pose a bigger risk. If the company grows and keeps increasing its profit, you keep getting a cut. On the flip side, if the company does poorly and fails to make money, you also fail to make money. In order to make money in the stock market, you have to bet on the best companies. Really think about which companies will prove to be profitable. Is your bet a Blockbuster or a Netflix?

That being said, the market does not always guarantee profits. The state of the economy ultimately dictates your chances of making money.

The Dow Jones Industrial Average, fondly known as “the Dow,” or by its initials, DJIA, basically tells us which way the market swings. Since the state of the market correlates to the state of the economy, the Dow can be used to help us glean information concerning the latter.

“The Dow is an index of 30 blue-chip stocks trading in the New York Stock Exchange and the NASDAQ, which are the two biggest stock exchanges in the U.S. It includes companies from a broad range of sectors and is meant to represent the overall economy,” former JP Morgan intern Elijah Pierre said.

Dow Jones & Company, a.k.a. the guys responsible for the index, calculate the index by adding up the stock prices of those 30 companies and dividing it by their special Dow divisor. This results in an average of the stock performance for the 30 biggest companies in America.

In theory, perhaps. In the practical world, definitely not. The state of the economy directly influences the behavior of the stock market.

Recall that lemonade stand? When the economy tanks, no one wastes their dollars on lemonade. They save their money and make do with water. As a result, the stock market usually goes down. On the other hand, when the economy thrives, you can bet your many dollars that people will buy lemonade. The result? You’ve guessed it! The stock market goes up.

An increase in the Dow means that the stock market swings up (usually indicated by a green color on a stock chart)—the people love their lemonade. A decrease in the Dow would therefore mean the opposite—tap water and a scary red color on the charts.

You can do this in a couple different ways. Younger people prefer to invest through apps like Webull and SoFi, which allow you to purchase fractional shares. This means that you can own part of a single share, which currently costs upwards of $300. A few top brokerage firms, like Fidelity Investments and Charles Schwab, have also started allowing the purchase of fractional shares. Others, like Vanguard, still require you to purchase at least one full share.

One of the safest bets you can make. The 30 companies that the Dow tracks comprise the SPDR Dow Jones Industrial Average ETF Trust. All of these companies have proven that they can rake in the big bucks, time and time again—hence why we call them “blue-chip” stocks. When you purchase a share of $DIA, you obtain a piece of each of the 30 companies. If five of those companies end up underperforming, you still have 25 making profits. In other words, you diversify your risk. Compared to other types of investing, you will likely receive sure and steady returns with the Dow.

“The stock market gives you an annual return on investment of about 10%, but there are other markets too. Traders who invest in foreign exchange or cryptocurrency markets can see up to 100% return on investment, sometimes even more,” Columbus State Community College sophomore Alex Hosein said.

In some cases, the bigger the risk, the bigger the reward. That being said, a “go big or go home” attitude rarely benefits new investors. If you want to start investing and prefer to play it safe, then the Dow just might be your new best friend. 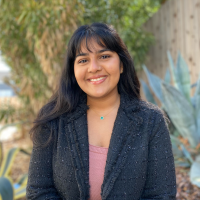 Katelyn is a senior at UCLA majoring in History and minoring in Film, Television and Digital Media. She's interested in stories of all shapes and sizes; though, her favorites tend to be in the form of fantasy novels, web-comics and disruptive media platforms.

Step Out of Your Comfort Zone for National Take a Chance Day
Next Post: The Virgin Bar Guide for Turning 21