Sex and Detergent: Tales From the Laundry Room

Let’s face it. No one likes doing laundry. The machines are ancient and expensive, and whether you return to a suds filled room because you went a little too heavy on detergent, or you drop your thong in front of a really cute guy, you never know what you’re going to find when you walk down the hall with that laundry basket. If you graduate without having at least one embarrassing story from the laundry room, you probably didn’t wash your gym socks enough. Ten people have paid their dues—literally and metaphorically—and earned their rights to leave dorm laundry behind forever.

“I wanted to do a quick load of laundry so I’d have clothes to go out in. When my clothes were done washing, I threw them in the dryer and went to my room. I came back and this big ass comforter that wasn’t mine was tumbling around with my load of clothes! I took it to my room and held it just to be a jerk, then hours later put it back on top of the dryer. Cheapskate!” —Bridgette Lewis, recent graduate, University of Maryland, Baltimore County

“I’m just doing my laundry like a freshman on a Saturday in the middle of the day. I walk in and this girl who lives on my floor and a guy who lived below us, who pretty much hooked up with every girl on our floor, were making out. Right when I walked in they tried to stop and play it cool, but I knew. I didn’t leave either—I just stayed and kept doing my laundry. I was, like, ‘hey guys!’ because I knew them both. They were just, like, ‘hey,’ and then they left.” —Katie Jones, senior, Boston College 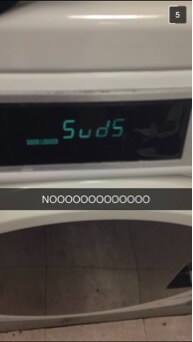 “I found out it [the machine] had broken half way through the cycle. When I opened the door a bunch of water poured out and the machine was filled about a third of the way with water. All of my clothes were just completely soaked…drenched. I had to take all my clothes—which included a super heavy towel that was probably 10 pounds—and ring them all out outside. I took about 10 trips holding things like my underwear, so embarrassing, and wringing them out, and then coming back in and putting them in the dryer.” – Caitlin Toto, senior, Boston College

“A few weeks ago there was a really creepy guy sitting in the laundry room in the chairs by the wall. I walked in, and he was, like, ‘Hi, how are you?’ He just sat there the whole time I was doing my laundry, and he wasn’t doing anything. As I was leaving, he said, ‘Have a nice day.’ He was probably a 50-year-old man, a little heavy-set, just sitting there. It was very strange.” —Jules Salibello, senior, Boston College

“I was just doing my laundry on a regular Friday afternoon, and one of the workers came up to me and said, ‘You’re using the wrong detergent!’ He went on this whole big spiel about how my detergent wouldn’t clean my clothes. And I was, like, ‘Dude, it’s detergent. It all works fine.’ Then I walked away because I felt so awkward.” — Boston College senior

“I was doing my laundry, and I put my clothes in the dryer and left. When I come back, I see my hot pink thong stuck to the dryer window while the rest of my clothes are swirling around behind it. It was so embarrassing.” —Nicole Baisden, senior, North Carolina State University

“I woke up early one Saturday morning and decided to do some laundry because I thought it would be pretty empty. I swiped my card to get into the room, and there’s just a guy sitting there and another guy is cutting his hair. They looked at me and didn’t say anything and carried on. So I was, like, ‘OK,’ and I carried on. One guy just had buzzers and was shaving the other guy’s head. There isn’t even a sink in there so I don’t know where the hair was going.” —Hayley Jayson, senior, Boston College

“I was trying to wash my sheets and comforter, and a comforter obviously needs a couple rounds to dry, but it came out dripping wet each time. I was so frustrated. I used three different dyers and none of them worked. They charge you $1.50 per dryer, so I emailed the laundry room company and told them I wanted my money back. They said they would send me a check, but I never got it. The laundry rooms suck.” —Emily Morrissey, senior, Boston College

“My freshman year roommate, whose older brother went to BC, told me about the ‘Vanderslice slicer.’ Supposedly, there was a fight over laundry and someone brought a knife and stabbed the other person. It’s crazy. It’s laundry. It’s really not that serious.” —Anna Whitham, senior, Boston College

Update: In 2007, two girls got in a fight after one accused the other of sabotaging her laundry with bleach. The fight escalated over the next few days, and the accused stabbed the accuser twice in the chest with a pocketknife, leaving the walls and floor smeared with blood. Check out the full story here.

“This was maybe the third time of the five times I’ve ever done laundry. I thought the dryer was the washing machine, so I put my clothes in the dryer for an hour and they came out all hot and they weren’t clean. So, I definitely messed that up…” —J.R. Arakelian, senior, Boston College

*Note: It was next to impossible to find a guy with an embarrassing laundry story. I wonder why…

Previous Post:Interns vs. Employers: The Worst Stories You’ve Ever Heard
Next Post:CM’s 10 Best Schools For Yoga-Lovers