Remember your wide-eyed freshmen days, floundering left and right to find the friends the college experience promised us? Eventually, as the weeks passed, we knew who we could share instant mac and cheese with and we settled down. Late night movie traditions and Snapstreaks blossomed every week. Chunks of hair would fall out in sync as friends crammed for exams, studied and passed (out) together. You looked into each other’s black-rimmed eyes at 4 a.m. and knew you were stuck with them for the long haul.

All those things happened with me and my friends. We made food together, bought underwear together, religiously watched YouTube tutorials together, the whole package.

But something interrupted our chick-flick worthy friendship: our academic dreams. We pay colossal amounts of money to go to college in the US, and my roommate genuinely wanted to take every chance she had to make each dollar worth it.

And that’s the story of how my roommate left mid-sophomore year for a Syracuse University semester-abroad program in London.

All through the first semester of sophomore year, the girls and I knew my roommate was going to London for the next semester. She would have no other semester to go to London because of her academic requirements, so it was now or never. We knew this and we supported her, of course, but we always looked at her with narrowed eyes and playfully hostile scowls when she mentioned her travel plans.

My roommate, like me, was an Indian living on an American campus. We became friends our freshman year. We decided to live together our sophomore year because we both liked peppery Indian noodles and the guy from The Flash. My roommate was one of a handful of my friends who knew that “Chai tea” is a redundant name for tea, since “Chai” means “tea.” She had horrible taste in Bollywood music sometimes, but it was pleasantly familiar in the background. We hustled hard together—I can confirm that she looked at me murderously with black-rimmed eyes at 4 a.m., knowing that I was going to get more sleep than she was that night. We knew what it was like to have the WiFi perform so badly that we couldn’t talk to our families on the other side of the planet. It was especially rude of the WiFi to cut out because she has an extremely cute beagle.

My roommate was one of my best friends. I felt a mixed bag of emotions every time the British came up that semester. I was glad she was making the best of her opportunities, but I was also a little miffed about being so obviously deserted. And no, I didn’t overreact. I always attempted to be on hand whenever she felt particularly stressed about her visa and tickets and even offered to yell at people for her. But the closer it got to the end of the semester, the more real it became. Soon, her floral pink bedspread vanished, and her art frames were dismantled from the wall. Her books were stacked into fragile cardboard boxes and three large suitcases became the fattest residents of our shared dorm room.

The big question to my self-obsessed brain was what I would do. I’d either have a new roommate or be living alone. I had prepared for neither of those possibilities because they meant mostly the same thing to me. But for the time that she was here, I made my best efforts to make it seem as hilarious as possible. #NoNewFriends was now more than just a hashtag, and we always joked about her inability to get visa approval.

The night before she left, all our friends gathered in our room and prayed that her flight tickets would spontaneously combust. It didn’t work. her flight tickets remained intact and she successfully left me. Now, an empty white bed glared from the background of my screen every time she and I FaceTimed.

I hadn’t received information about a new roommate at all, so I expected to live alone for the semester. I scattered my possessions all across the room to make it less empty. I left an old photo of her in the drawer we shared and added her snacks to my food stash. I grew accustomed to seeing just my face reflected across the glass window and coming back home to zero, let alone bad, music. No nighttime lamp and scowls interrupted my sleep at 4 a.m. I got used to the space for about two weeks when the new roommate appeared with very little warning.

The shock wore off soon; my new roommate turned out to be just fine, and my old roommate still blew up our group chat. My old roommate stalked all of our Instagram photos, complete with snarky comments, and had it not been for her lack of Photoshop skills, she would have made herself appear in each photo, too. She looked around her old room with wide eyes from my phone-screen, marveling at the changes, noting that the room had been cleaner when she had lived here. I think I hung up at that moment.

If there’s anything valuable in college that I don’t get attendance credit for, it’s the lessons you learn as you adjust to strange changes. My nose twitched suspiciously when it smelt a different scent from my new roommate, rather than the one I had been used to the previous semester. Instead of seeing my own face in the window refelction, I saw new posters now when I walked back to the room. This reminded me that my new roommate had her own personality, and just like I adjusted to my freshman year roommate, I adjusted to this one, and warmed to her presence too. And I have some great stories to tell her about the room’s previous resident.

Adjustment makes your time in college worth it: be it communal bathrooms, lack of space or lack of a familiar roommate. Even though I don’t live with a best friend anymore, I still have the rest of my best friends to count on and take photos of expensive food with. All the photos are also immediately sent to our friend in London, who responds with snaps of her binging on British food. We collectively don’t reply to those snaps.

A month into this strange semester, I have two things to say: strong friendships stick, and never lose the Snapstreak. 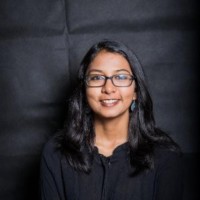 I’m a full-time sophomore studying magazine journalism at Syracuse University and part-time author of a constant stream of #randomthoughts residing in my brain that will probably never be printed. Keeping hopes up for an audiobook, though.

CM’s Guide to the University of Massachusetts Amherst
Next Post: 10 Ways Your College Library Can Get You a Kick-Ass Research Project