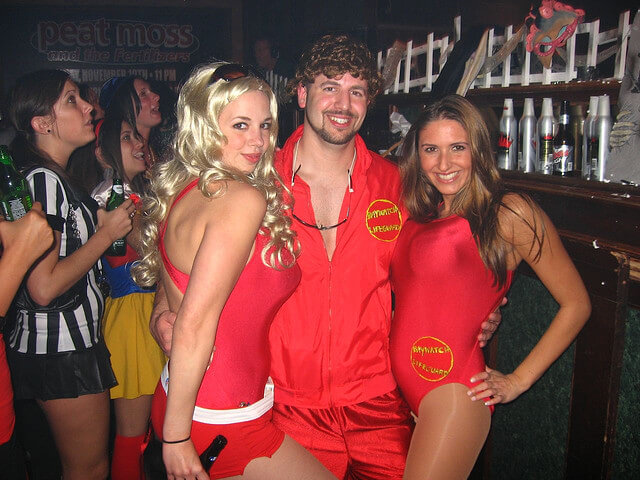 Let’s be real. Legit Halloween costumes are expensive, and as college students, we usually don’t have the funds to be a real bona-fide Ninja Turtle. Party store costumes usually don’t fit right and smell like plastic, and if you’re a girl, there’s a 95 percent chance that your costume options are all “sexified.” It’s times like these when thrift stores become your best friend—they’re chock full of clothing that’s equal parts cheap and outrageous. Check out these thrift store success stories and find some inspiration for your own Halloween costume.

Bilbo Baggins from The Hobbit

Maria Llanso is a student at Howard Community College, and she’s an avid cosplayer and con-goer. She’s had tons of experience making costumes, and Bilbo Baggins was one of her best. “I went to 2nd avenue and found the perfect velvet maroon jacket. Then I found some brown pants and cut them shorter so my calves were showing. I also got an off-white renaissance-faire-looking shirt from the thrift store and used that for the base shirt to tuck into the pants, and then found a perfect little green vest that I sanded down to make look worn and older and less shiny, and I painted the buttons gold. That’s about it I think; I had the wooden sting sword made by my grandfather, and the hobbit feet I got off ThinkGeek,” Llanso said.

College Magazine editor Caroline Crasnick spent less than $15 on this beautifully gory Carrie costume. “I went to the party store and picked up a princess tiara and a bottle of fake blood. After, I went to the thrift store and looked for any light-colored dress to make the blood stand out, and wore an old pair of heels.” The costume may be scary, but the price definitely wasn’t.

OK, you caught me—this one is me. I consider myself a thrift store costume aficionado, and this costume is one of my favorites. I actually got the jacket and skirt at our local thrift store years before for another costume so I had those on hand already. I had also picked up the jewelry at a craft store years before. I paired it all with my black flats and bought a plastic martini glass at the party store. After that, all I needed was to assume the attitude of an out-of-touch rich person, and I achieved that by frequently asking, “How much could one banana cost? $10?”

Walt and Jesse from Breaking Bad

Boston College senior and College Magazine senior editor Lisamarie DiOrio and her boyfriend Dan Flaherty, also a Boston College senior, dressed as Walter White and Jesse Pinkman last Halloween. But they technically each had two costumes—halfway through the party, they changed from regular Walt and Jesse to Meth Lab Walt and Meth Lab Jesse. “Everything was either stuff we had or ordered on Amazon. I spent like $25 between the suit and the mask. The suits, mask, and fake beard are from Amazon; everything else is ours or our roommates’,” DiOrio said.

Rogue from X-Men and Petra from Attack on Titan

This one’s a special two-fer, since both ladies in the photo made their costumes themselves. On the left is University of Maryland graduate Zoë DiAngelo, dressed as Rogue. “The jeans and bandana were mine. I borrowed the jacket. I went to Rugged, looked for green and yellow, and found the spandex workout shirt, which was perfect. I teased my hair to death and used white hairspray for the stripe. I even had a pair of gloves, but those were in my pocket for the photo,” she said.

On the right is University of Maryland graduate Tori Buckshaw, dressed as Petra. “The turtleneck and pants were bought from thrift stores for simplicity’s sake. Some of the specialized bits that were specific to the series had to be bought special or made from scratch, like the jacket and the skirt thing,” she said.

This one is especially fun to make because you get to get messy. University of Maryland junior Ellen Levine revealed the mechanisms behind her costume. “I traced the palette on cardboard and cut it out, and I borrowed my mom’s beret and splattered paint all over an old shirt to make the smock.” Not included as part of her costume was her little brother Eli, because artists don’t generally need bodyguards.

That’s right, world. College Magazine senior editor Lauren Yevak was quite the creative child and dressed up as a spoon one Halloween. “My mom bought me a bunch of tin foil and two poster boards from the nearby Rite Aid. I used the spoon’s friendly neighbor the knife to cut out the shape and the hole for my chubby face. And by ‘I used,’ I mean my mom made my costume while I sat next to her holding a real spoon, eating ice cream.”

Zaphod Beeblebrox from The Hitchhiker’s Guide to the Galaxy

Sorry…It’s me again. I couldn’t resist further proving to you that I’m a giant geek, even at the expense of my dignity—this photo was taken in middle school. I dressed up as the President of the Galaxy that year (look him up). The sunglasses and black pants were already mine, and I definitely struck gold when I found the gold shirt at the thrift store. I also found the red trench coat at the thrift store, and the rest is history. As an added bonus, my friend handmade her own costume to go as Marvin the manically depressed robot from the same book, which included a paper mache round head.

College Magazine editor Rocio Cosme’s costume was originally made as cosplay, but when you have an outfit that awesome, why not double it up for Halloween? Especially when you put so much effort into making it yourself. “I ordered a full-body dance leotard from a dance store and used black ribbons and buttons from a Joanne’s store to make the lines on the costume. I bought a gold headband and two gold bangles and used them as shackles. The white wrist pieces I made from cut up gloves, and I got the red cape, pink wig and boots from a costume store,” Cosme said. She’s the one on the left, but her friend’s costume is pretty rad, too.