Home » Latest Posts » What I Never Expected When I Transferred Schools

What I Never Expected When I Transferred Schools

Did you know that over a third of all college students transfer schools? I didn’t, until I took up ship in the transfer boat myself. I was taking  “How Many of These Gross Food Habits Do You Have?” Buzzfeed quiz when my phone vibrated in my hand. I clicked on my Mail app, opening an email from the school I’d applied to transfer to but hadn’t told anyone about.

I looked at the screen with wide eyes. Crap, I thought. I’d just started dating a guy who I could’ve seen myself getting really serious with. Before meeting him, I would’ve jumped around and screamed with joy upon receiving that email from William & Mary. But college got easier once I had a boyfriend. For instance, I always had someone to grab lunch with in between classes, someone to help me study for my Spanish exams and a go to person to hang with at frat parties.

Nevertheless, I knew I couldn’t stay for him—we’d just started dating. But more than that, I knew I had to transfer schools to keep my pride as an independent woman. Even if I decided to stay at my previous institution for my own reasons, I’d always have this suspicion I actually made this huge life decision because of a man. So I left. We broke up; and I felt proud of my decision. I assumed that the hard part was over. I’d be this carefree independent person at a school that was a much better fit for me, right? Oh, how little I knew.

Before I transferred, no one really informed me that I was about to go through one of the most emotionally confusing parts of my life. For instance, after I settled into my dorm in Williamsburg, I followed my new hallmates to the campus center to get our new student IDs. “Hey Tris, I mean Tess, could you hold my spot in line while I run to the bathroom real quick?” I chirped before literally running to a broom closet to look at snapchats of my ex and his friends moving into their new apartment in Boston. I ugly cried and blew my nose into what I now realize was a dirty mop.

My newfound loneliness and general displacement caught me off guard. I wasn’t supposed to feel this alone. Instead, I was supposed to feel proud of my choice to be independent and do what was right for me.

I’m pretty sure Tess had held my seat in the auditorium so many times during orientation events that she suspected I had food poisoning. I texted my mom to come pick me up. I told her that I’d made the first terrible mistake of my life, and that I needed to go back to Boston and pretend this never happened. Naturally, she told me I needed to stick with my choice and trust that I had made the right decision. For the first time ever in my perfectly planned honors student life, I felt like I’d made the wrong choice.

But after orientation ended, I went to a frat party. At the door I ran into guy who looked a lot like my first college crush back in Boston. He introduced himself, and soon enough he was taking me on a behind the scenes tour of William & Mary, my new home.

We sat on a bench near Colonial Williamsburg. He kissed me in front of the oldest building on campus that dates back to the 1600s. Even though he lied about a few traditions that night, telling me that the cannons in front of the Wren building would actually fire if you walked in front of them past midnight, it was the happiest I had felt since I set foot on campus.

Memories of Boston receded into the back of my mind as fast as classes started over the next few days. After that guy from the frat party was out of the picture, my friends from my hall and sorority took over to make me feel at home on campus (through a lot of chocolate and sleepovers, obviously).

When I left Boston, I thought I was about to start this new chapter completely alone, as this strong woman who didn’t stay at the wrong school for some guy. But along the way I learned that while loneliness is a part of life, it also isn’t permanent. 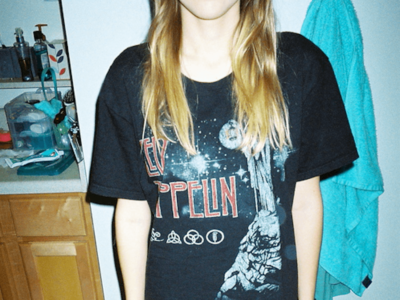 Why a Band Tee Made Me Transfer