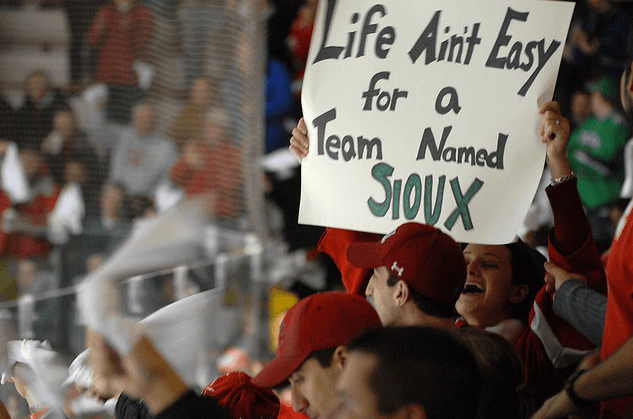 The University of North Dakota has been in quite the pickle over the last month due to its Fighting Sioux nickname.

On one side of the school’s conundrum is the NCAA, which told North Dakota in 2007 that it needs to abandon the name by August of this year because it was considered offensive to Native Americans.

The university had originally agreed on the NCAA’s timeline and decision to remove the logo and name from its athletic programs, but ran into a roadblock this year when the state legislature passed a law ordering the school to continue on as the Fighting Sioux.

Now the school must figure out which organization to listen to: the state or the NCAA?

The issue plaguing North Dakota, although more complicated than ever before, is nothing new.  Professional sports and college teams using Native American names and logos have been embroiled in controversy for decades.

In all that time, the argument has hinged upon whether these nicknames and logos honor Native Americans and celebrate their culture or perpetuate racial stereotypes and discrimination.

There is no blanket answer to this question.  Some names that have been used encourage a negative connotation (Washington Redskins, Atlanta Braves, Carthage College Redmen, Southeastern Oklahoma State University Savages, etc.) towards Native Americans.

Other teams are less offensive.  Florida State University has had a great relationship with the Seminole community in its area.  The school’s mascot, Chief Osceola, has been called inappropriate by some, but women of the Seminole tribe actually design and create the clothesthe mascot wears during athletic events.

The relationship between Florida State and the Seminoles is an outlier though.  More often than not the use of Native American logos and nicknames by teams create cartoonish representations of the people and trivialize tribal traditions.  Teams certainly have the ability to honor Native Americans in their region, but few often do so successfully.

Even teams like the Florida State Seminoles, teams that are actively trying to honor a specific tribe in their region, are guilty of damaging the Native American tradition more than helping it.  Even at these schools, the culture of the tribe can be belittled.

Rutgers University’s Race & Law Reviewrecently published an article by John Wallace that showed how schools with good intentions still succumbed to stereotypes.  The article quoted Charlene Teters, a University of Illinois Graduate of Native American descent, as saying the Fighting Illini was degrading the Sioux tribe it was attempting to admire.

“When I first arrived here 10 years ago, it was with a great deal of excitement,” Teters said in the article.  “…I came full of dreams.  But what I found … was a community permeated with Indian concoctions, a campus bar with a neon sign, Home of the drinking Illini, a sorority Miss Illini Squaw contest.  Fraternity brothers wearing colored paper headdresses to go to the bar to drink, and act out negative stereotypes of Indians. My dream … turned to a nightmare.”

A school’s administration can do whatever it wants to honor a nearby tribe, but it does not matter much if the society surrounding the school uses the nickname and logo to spread Native American generalities and stereotypes.

Until people can show the proper admiration for these names and logos and give Native American traditions the respect they would give to other cultures, the Fighting Sioux should be removed.