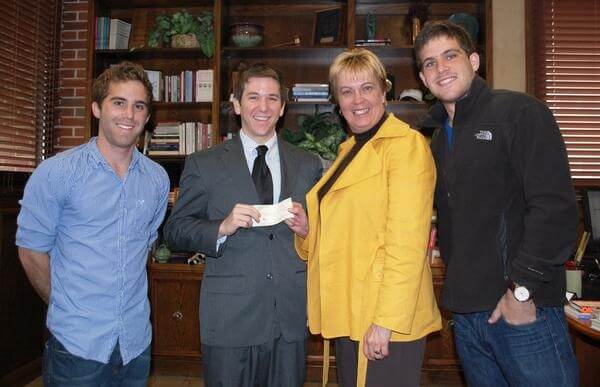 Josh AxelrodMar 14, 2012
Home » Latest Posts » Making Moola: CM Interviews The MoolaGuides Team
FacebookTweet
The concept behind MoolaGuides is so simple you have to wonder why this wasn’t around much sooner. It’s essentially an online marketplace for buying and selling notes. You set a price, post your notes on the web site, and wait for someone to buy them. The seller makes a substantial profit, while the consumer now has the best study guide money can buy. Everybody wins!
This ingenious idea is the brainchild of Florida State University juniors Thomas Brady, David Russell and Alex Wolniewitz. They’re living every young entrepreneur’s dream right now: running a successful business before they even have a college degree. Must be nice, huh?

MoolaGuides was inspired by a simple observation.
“When I was a freshman, I noticed there were a lot of students buying notes,” said Russell. “No one was doing it online or doing it in an efficient matter. At that point I started thinking of ideas to make the process easier. So we decided to bring it online.”
According to Brady, the three amigos met during their sophomore years in the “Sophomore Experience,” a three-year entrepreneurship program at FSU where you work as a team to create a business. This is where MoolaGuides went from an idea to a reality.
How successful has MoolaGuides been since its inception? Since the guys made their first study guide sale during Thanksgiving break 2010, MoolaGuides has sold over 16,000 study guides, students have earned over $100,000 through the web site and the business has expanded to include 15 universities. Even more impressive: every semester of the company’s existence (it officially launched in spring 2010), it has doubled in size.

“I think all three of us are extremely happy,” said Brady. “I don’t think any of us expected this so early in the company’s life.”
Russell agreed: “At the end of the day it’s something we can all be proud of and show off.”

Brady said that the best way to get the most out of MoolaGuides is to advertise your notes. He recommends emailing your classmates to let them know you have notes for sale or going old school and writing something like “Study guides available at moolaguides.com” on a blackboard.
Russell had another suggestion: “Make sure that everything in your material looks good, is easy to read and [has] no misspellings.”

Find schools
Considering the potential you have here to make a nice chunk of change, there’s no point in trying to sell a subpar product. Study guides usually go for anywhere from $0-40, so it’s possible to make $200 or more in one fell swoop. The best-selling study guide in the site's history went for over $1100.
Quality notes are definitely more likely to reach that goal than ones that look like they were made by a sixth-grader. If you’re really in need of the financial lift, it will be worth your time to put effort into creating the study guides in order to ensure they sell.

“We really want to emphasize that our service is good for students with financial responsibilities,” said Brady. “You can get rewarded fiscally for your study efforts.”

Get A Life…And Maintain It

So these guys go to school full time, run a thriving business and all have girlfriends. How do they do it all without going insane?
“Part of being an entrepreneur is that our work schedule is 24/7,” said Russell. “Luckily we all have smart phones.”
Wolniewitz chimed in: “It’s definitely difficult, but it all comes down to time management. You have to be extremely organized. Part of what makes us so successful as a business are the same skills that we use in school.”
Actually using things you’re taught in school in the real world? What a novel concept.

Business: Just Do It

Brady shamelessly quoted the Nike logo in his advice to aspiring college entrepreneurs.
“Just do it,” he said. “You have nothing to lose and everything to gain. Make sure you don’t give up. [Remember that] every business has a bad day. Tomorrow will be better.”

Wolniewitz continued the never give up theme: “The one successful idea or business that you run is worth all the failures.”
So there you go. If you want to become rich and successful like the MoolaGuides team, remember the immortal words of Kelly Clarkson: “What doesn’t kill you make you stronger.” She was the first to say that, right?
I digress. Despite MoolaGuides’ accomplishments, Brady doesn’t think his company is all it’s ever going to be yet.
“I hope to see MoolaGuides go national,” he explained. “Maybe international. We want to be prevalent, giving back to campuses throughout the nation. We feel like we’re working on our future rather than just a small business.”
Right now, that future looks pretty bright.
Check out Moolaguides.com to see what their business is all about.