You are here: Home / Life / I Quit Coffee for Two Weeks and Nearly Died

I’m no Lorelai Gilmore, but I can’t survive any mornings without a cup of happy. I used to joke that if I didn’t have my morning coffee I’d need a morning Advil because no coffee means a painful, throbbing headache that’ll last the whole day. On the other hand, coffee (or caffeine in general) makes my anxiety 10 times worse. Ever experience shaky hands, nausea, increasing panic, a racing heart or my personal favorite-twitching eyelids? Yeah, that ain’t pleasant, and that’s what coffee does to me—especially when I’m stressed or nervous about something. With that in mind I attempted my bravest feat ever: saying goodbye to caffeine for two weeks.

Even if you have to say goodbye to coffee, at least you can wear it: 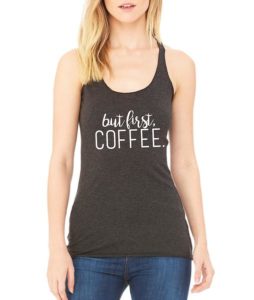 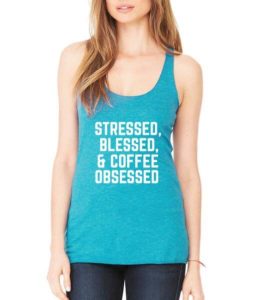 A couple days before starting, I set out my rules. During week 1, I would drastically reduce my caffeine intake from 1-2 cups a day to nothing more than a quarter cup in the morning. I only made an exception for the weekend because I had to work at the ungodly hour of 5:30 (yes, a.m.) and I didn’t want caffeine withdrawal symptoms to cause accidents with fryers or sharp knives at work. During week 2, I would consume zero caffeine (again with the exception of Saturday). That’s right-no coffee, green tea or my beloved chai lattes. However would I survive?

Monday: Starting on a Monday morning sounds like a rookie mistake, right? Much to my surprise I actually didn’t feel too groggy waking up. Instead I chugged a huge glass of water and chased it down with an apple. Ugh yes, very healthy. It was very tempting to make an entire cup of coffee, but I made do with a mere four sips.

By noon, my head started to ache. I had to take a couple Advil just to keep my head from throbbing too badly. By the time I got to my afternoon class, I’d turned into a straight up zombie, shuffling everywhere and yawning every thirty seconds. I could barely lift my phone, and took zero notes as you’ll see above. As the day progressed, I started to feel a bit better, although the prospect of all of my unfinished homework really sucked. Why did I decide to do this again?

Tuesday: I overslept by 20 minutes, which I’m not sure has to do with simply being tired or the lack of caffeine. My head didn’t really ache (yay!), but I felt irritated and jittery all day. While walking to class, someone literally walked literally two feet in front of me, taking their own sweet time. I wanted to shove them aside and tell them to quit blocking traffic because I had places to go, even though I wasn’t late at all. Every time my phone buzzed I rolled my eyes, wondering who in the world was bothering me now. I got pissed when my Fitbit took too long to sync, when I ran out of water and especially when Spotify ran the same ad again and again.

Wednesday: You have no idea how hard it was to walk past Starbucks before class. I gotta say though, it was nice not standing in line to wait forever for my drink, only to end up having to run to class. Instead, I had 10 more minutes to continue scrolling through Twitter. But during class, I felt almost naked without the usual white Starbucks cup, like I’d forgotten something important.

And about a quarter way through, I started to feel super hungry, which usually never happens. Maybe it was the absence of caffeine? I ended up having to dig out a random piece of leftover Halloween candy while daydreaming of Chipotle. I kid you not—I could literally taste those chips as I took notes (and let’s be real, checked Snapchat).

Thursday: As I scarfed down a bagel for breakfast, I started eyeing the box of instant coffee I’d placed on a high shelf on Sunday. I mean, how well would a cup go with that bagel? All I had to go with breakfast this morning was, yes you guessed it, water. There’s something about fall that makes me crave Starbucks. I mean, today I wore an infinity scarf, a beanie and a pea coat AKA an outfit that just screams fall and practically begged for me to complete the picture with a Starbucks cup. Hello, Insta-worthy (am I right?) But I’m proud to report I didn’t cave! I was able to march right past Starbucks and straight to class.

Friday-Sunday: I had to drag my poor butt out of bed at the ass crack of dawn…or 4:30 a.m. My, how I missed coffee. I usually can’t stand the taste of instant coffee, but I nearly started salivating as I mixed my ¾ cup. How embarrassing. At work, I was in an oddly good mood, singing along to the radio and laughing at customers’ lame jokes, although that usually happens since work gives me a nice break from stressing over schoolwork. But my manager commented on how “chipper” I was that day, so I guess I was beaming at customers a little too much.

Monday: The headache was back today, probably due to the increased caffeine intake over the weekend. It was worth it though, because I really didn’t want to get into another accident at work. Ever pour an entire pot’s worth of boiling soup over your chest? Let me tell you—that hurts like a you-know-what.

I had major déjà vu today because I really couldn’t concentrate during class. My head throbbed, although I suspect that had less to do with the lack of caffeine and more to do with the fact that I have the eyes of an 80-year-old lady, AKA my eyes are 50 shades of terrible. When I quit starting at my laptop and took notes by hand instead, my head felt better, so maybe it wasn’t caffeine withdrawal. Either way though, today wasn’t great.

Man, I was tired AF this morning. I decided to make some tea this morning. Without something warm, the morning just feels wrong. Did you know that practically every kind of tea has caffeine? Besides my beloved chai, green, black, even that yummy Starbucks holiday blend has the c-word. I was stuck with lemon ginger, which definitely is not my favorite. But even that was better than nothing. The upside to this morning though? No headaches!

Wednesday: What’s thick, warm and can sort of (but sadly not really) pass for coffee? Hot chocolate! Best of all, I felt particularly festive today, so hot chocolate really did the trick. I had an interview, which predictably freaked me out, but without caffeine my anxiety didn’t feel as bad as usual. Instead of feeling nauseous for hours, I only had a pounding heart and shaky hands.

Thursday: So I love Thanksgiving much more than Christmas. Giving and receiving gifts is fun and all, but tends to stress me out. For Thanksgiving, though, all you do is eat.

I made hot chocolate again, adding tons of whipped cream because YOLO, and I gotta say I didn’t miss coffee at all. That, along with the fact that today was all about feasting, really put me in a good mood. Coffee who?

Friday: I got to sleep in a ton Friday morning. Plus I’m not really one for Black Friday shopping, so my day was pretty chill. I made another cup of hot cocoa this morning, more out of habit than anything. By now, I really didn’t care that I’d pretty much gone caffeine free. The smell of my family’s morning cups of coffee did nothing to tempt me either. And honestly, I felt more excited about binge watching Gilmore Girls than the prospect of being able to drink coffee again the next day.

These two weeks surprisingly didn’t suck too badly. As soon as I got over the hangover-esque head throbbing, I felt mostly fine. What really surprised me was that I didn’t really crave coffee. I’d expected to have some serious daydreams about hitting up Starbucks, but I just kind of got used to it and moved on.

What I really did miss wasn’t the caffeine, but drinking something warm and yummy in the morning. The weirdest thing was actually the hunger. It’s no joke that caffeine suppresses your appetite. I also learned that I don’t prefer tea. Don’t get me wrong—tea is great when you’re sick or just want something close to water, but that’s just it. It’s too close to water. I’m never going to be an avid tea drinker.

The bottom line? I’ve officially cut my dependency to caffeine. Will I still drink coffee in the morning? Hell yes. (Or at least most mornings.) But now I know I don’t need to worship the altar of Starbucks, and I feel free to skip the java whenever I want. Also saving all that money felt great. Who knows? If I have the willpower to say no to coffee, maybe I can start cutting down on other things, like social media. Alright, probably not, but it’s fun to fantasize about.

Valerie is a senior at the University of Washington, studying English/Creative Writing and History. She loves anything caffeinated, Netflix and long road trips. She'll always be obsessed with Once Upon a Time, Scandal, Private Practice and Agents of Shield.

Top 10 Schools for Aspiring Musicians
Next Post: How to Find a Professor Who Enjoys R. Kelly Jokes