You are here: Home / Life / Freshmen / Don’t Buy Tacos from Strangers and Other Unexpected Lessons from Freshman Year

I’ll never forget the sight of my first college professor—an apparent sign that my college experience and high school experience would be night and day. He wore a tight, tight shirt that read “A Clockwork Orange” and red plaid pants with chains. He had spiked hair and an Australian accent, and was nothing like what I had expected.

When I had stepped into a gargantuan lecture hall at 7:30 on a Monday morning alongside 700 other “Econ 102” students, I’d stood, frozen, anxious and ill-prepared, in front of the largest lecture hall on campus on my first day

Sure, I’d read the syllabi for all of my classes. I’d spent the night before finding all of my classrooms. I’d even set my alarm a full hour early each day to have enough time to get to my first class. But all of that seemed irrelevant as I stared at 726 available seats, I couldn’t just pick one and sit down. Sweating from the long trek up the hill from my dorm to the building in the sweltering summer weather of late August, I scanned the area, looking for a familiar face who would be willing to chat with a nervous, sweaty freshman this early in the morning. Would every class be as exhausting (emotionally and spiritually) as the finale of How I Met Your Mother before it even began?

All signs pointed to my first class being a disaster. But eventually, the hundreds of students settled down and class began and that’s when this rock star walked in. Heads up, college professors can be nothing like high school teachers. Sure, there are the occasional distinguished, accomplished people who take lecture very seriously, but prepare for the weird ones, too—like professors that make frequent Austin Powers references and have grown their nails out longer than you have as an 18-year old girl.

I don’t remember one remotely economical lesson taught, but there’s one lesson I tucked into my pocket that day: Expect the unexpected. Expect to go on Amazon and see tiny textbooks running for about $300. Expect to run to make the bus that loops around campus, only to find that it left two minutes early. Expect your roommate to bring guys over on Tuesday afternoons while you’re in the room (no? just me?).

The biggest takeaway from freshman year after that first encounter with my professor? Anything, and I mean anything, can happen. You probably won’t be expecting the tight-knit group of friends that you made in your first week to break up and go their separate ways. Maybe they won’t. But, maybe they will. Get to know as many people as you can, because you (and your friend group) can change a lot during freshman year. You may just not click anymore, and it helps to be outgoing and make new friends. You probably won’t expect yourself to get emotional during a sociology lecture that hits home. But you might. You definitely won’t be expecting a group of drunken boys to knock on your door at 1 a.m., trying to sell you a box of Taco Bell tacos. Hey, it can happen. (And it did, to me. Don’t buy those tacos, by the way.)

The best part about college is that everything is new, exciting and pretty odd. But these bizarre things made for the best material for my memories, stories and favorite parts of my freshman year. By September, I settled in to my new life and my new routine. I wasn’t afraid to go to class anymore, and I learned to handle college in all its weird glory in just a few short weeks.

In classes nearly two years after the Sweaty Economics Debacle of 2013, whether I’ve made a dumb comment, forgotten about a really important assignment or gone on a lengthy rant about how I believe in aliens (Yes, that actually happened), everything is OK in the end. No black holes open up to swallow me whole. No mean girls push me in front of the bus. 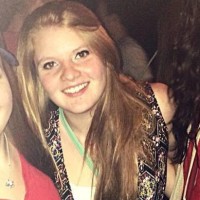 Caroline is a junior at Pennsylvania State University studying Media Studies and Sociology. She enjoys summer trips to Maine, binge-watching The Golden Girls, and time spent with her goldfish, Senator Ted Cruz.