You are here: Home / Life / Did I Chose My College or Did My College Chose Me?

I never really thought about college in any capacity until after I started high school. It didn’t cross my mind. My family didn’t talk about it much at home until my older brother started his application process. It wasn’t that I hadn’t planned on going…thinking about colleges just didn’t occupy any space in my brain. I could only name a few schools. The University of Michigan definitely wasn’t one of them.

I blame that on spending eight years of my childhood living in England.

My dad didn’t attend university. My mum went to University of Bristol—a fact about her that I didn’t even know until I went to college. (I know, I’m the daughter of the year! Sorry, mum.)

By the time I got around to thinking about college, my high school inundated me with college prep. Everything I didn’t know seemed crippling. So many of the people around me had been raised sporting apparel from their parents’ alma maters and dreaming of following in their footsteps. Thinking back on my naïveté is shocking even to this day.

When it came time to get the college process started, I’d been rowing for almost three years. Based on some conversations with my coach, I ended up only looking at schools with rowing teams. I wasn’t sure where I stood as a recruit. So I looked at a selection of teams with varying degrees of competitiveness.

Rowing became the focal point of my college search.

In the spring of my junior year, my mum took me out to California to look at a few schools. I looked at the University of California at Berkeley first. Other than feeling utterly blown away by its beauty, I fixated on how the hell all these students navigated a massive campus without a map. That concept stuck with me at every school I went to visit after, too. (Turns out, it’s not that hard).

We attended an event for potential recruits. I sat there ingesting every word the coaches and team members offered. I became obsessed. But I wasn’t sure I’d be fast enough to impress the coaches of one of the fastest teams in the country.

Spoiler: I wasn’t. I sent a dramatic plea email to the coach a couple months later telling her that despite my lightweight size I was competitive with open weight girls. She told me to call her the next day. I did. She didn’t answer. She later sent an email saying her recruiting class was full. I felt heartbroken at the time, but I’ll always feel grateful that I ended up where I did.

The summer before my senior year, my dad took me to visit a handful of colleges and meet with their coaches. I was beyond overwhelmed as the trip progressed. I even asked my dad if we could bail on the last stop and just go home. He said no, and dragged me, a sad ball of anxiety, to Ann Arbor.

We met with one of the coaches for lunch. I spilled food on my dress. She walked us around the campus, while telling me that, because of my size, my career there would be incredibly difficult, but ultimately worthwhile. Sounded good to me!

But then I didn’t hear anything. I wasn’t offered an official visit there. In fact, I was only offered one—to a school with great academics, but a slow rowing team.

A few weeks later, another one of the Michigan coaches, Liz, came to watch a practice. “This is it,” I thought. “Here’s my opportunity”. Liz spent the entire practice watching my friend Katie, who is a year younger than me. I felt mortified. Katie isn’t even eligible! I felt beyond disheartened.

Convinced I wasn’t going to be recruited and battling an ongoing internal debate about whether or not I should quit rowing, I dreamed up a new plan. I was going to quit rowing and go to New York University—an almost flawless plan. And I say almost because 1) I did not have the grades to get into NYU and 2) there was no way I was actually prepared to quit. (This pipe dream seems much funnier now that life has come full circle and I am a grad student at NYU.)

And then we raced at the Head of the Charles. The Head of the Charles is the world’s largest two-day regatta, held in Boston on the Charles River every October. For the rowing community, it’s a big deal. For everyone else, it’s a good excuse to drink and watch a sport (for free) that you ordinarily would not. We came fourth. And then some coaches started responding to me.

On November 7, I got a voicemail from one of the Michigan coaches asking me to call her back. She offered me a place on Michigan’s team. I was at the boathouse when she called. I ran to tell my coach and then drove home with tears streaming down my face. When I eventually accepted the offer, I found out I was the 13th recruit—the luckiest number, if you ask me.

How dumb was I, almost not going to the school and meeting with a coach? The answer: very dumb.

Although it sounds like I picked Michigan because they were the only people that wanted me, that isn’t entirely the case. I wanted a school that I would be happy at with or without rowing. I was deeply concerned I wouldn’t survive rowing for four years, so I needed somewhere with good academics and somewhere people seemed happy.

Michigan ended up being everything I could’ve asked for and more. There were so many things I hadn’t considered I’d wanted. When people asked me what I was looking for, I whole heartedly had no idea. Big school or small school? School spirit? Class size? Big city or small town?

Even more so, there was so much I didn’t know about the team I was joining. I remember listening to some of my teammates early freshman year talk about why they picked Michigan. They loved the head coach or the culture or the team members. Yikes. I hadn’t met the head coach, I didn’t know anything about the culture and I knew two girls on the team from high school, but that was it.

Luckily, things panned out. I don’t necessarily recommend being so uninformed and naïve about big decisions, but I do believe that sometimes, and only sometimes, maybe ignorance is bliss.

Filed Under: Life University of Michigan 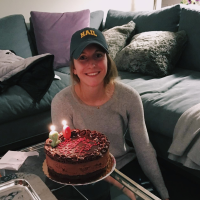 A University of Michigan alum, Felicity is currently a Journalism graduate student at New York University. She deeply enjoys sarcasm, everything bagels and laughing in uncomfortable situations. She can be found on twitter @shutupflick.

Going From 300 to 46,000 Classmates
Next Post: CM’s Guide to The Franklin Institute Internships