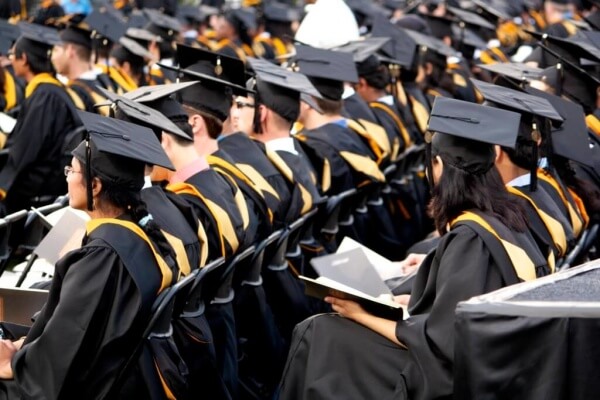 It’s graduation season. The highly anticipated time when mature college seniors become graduates. Evicted from the shielded safety of a college campus to enter the unknown and terrifying real world, we must all learn how to “adult.” As we leave behind 2 a.m. cups of Easy Mac and approach gradation, seniors gain wisdom. What advice would you give your freshman self?

“Be more open-minded. To have the chance to try a little bit more. Be more aware and try more things and put yourself out there.” – Skylar Beatus, Penn State Public Relations major

“The point of college is to get a job. Don’t party too much [and] mess up your GPA.” – Emily Bell, University of Texas Mathematics (Actuarial Focus) major

Get Involved from the Get-Go

“Get involved and stick with things earlier from the beginning. If I had gotten involved earlier, it would have been [a better] network.” – Angelica Bracco, Penn State Labor and Employment Relations and Psychology major

F Is for Friends Who Do Stuff Together

“[P]articipate in more activities and make more genuine friends. I studied a lot and worked hard, but after class I would go home and sleep instead of doing fun things with friends.” – Kayla DeStefano, Penn State Chinese and Asian Studies major

Don’t Be Fooled by the Freshman 15

“Get in a habit of working out your freshmen year. The freshmen fifteen is a real thing. Margaritas and natty light have calories.” – Melissa Lundell, University of Florida Business Management major

“I would say take advantage of every opportunity thrown at you because you never know who you could meet from it or what doors… could open for you down the road.” – Shannon Rafferty, Penn State History and Political Science major

“I wouldn’t have lived with my friend from high school [freshman year]. We had more differences than similarities.” – Connor Sease, Penn State Print Journalism major

“A little bit of effort goes a really long way. Stay on top of your mental and physical health. It is easy to fall into bad habits, so don’t let yourself become unhealthy. It will have a negative effect on your grades as well as college experience.” – Beatrice Smith, Penn State PGA Golf Management major

Home Away from Home

“The advice that I would give would be to immerse yourself as much as you can in whatever you choose to get involved in, because it will help you feel more at home.” – Maddy Wegmann, Penn State Communications, Sciences and Disorders major

“I think a big one would be not to be afraid [to ask] questions, specifically your professors, TAs, etc. and remember that they are here to help you.” – Louis Witalec, Penn State Aerospace Engineering major

Eventually college has to come to an end—unless you plan on pulling a Van Wilder. Now, as you young and inexperienced underclassmen feel empowered by your keg stand record, take these seniors’ sage advice. To quote the oh-so famous Ferris Bueller, “Life moves pretty fast. If you don’t stop and look around once in a while, you could miss it.”

Previous Post:6 Study Habits Successful Students Have
Next Post:Buzzed and Brokenhearted: Why You Shouldn’t Drink When You Miss Bae