You are here: Home / Life / Freshmen / From Cuban Bread to Blue Crab: Attending School Away from Home

I lived in the same house my whole life, didn’t get my driver’s license until senior year and didn’t leave home for more than two weeks without my parents. The year after I graduated high school, I moved from my hometown of Miami, Florida to attend McDaniel College, a small liberal arts college in Westminster, Maryland. As move-in day got closer, I cried at the realization that I would no longer see my friends whom I’ve known since middle school. Every day I was terrified of the upcoming possibility of doing laundry and other tasks for the first time.

A year later, I can honestly say the differences that initially scared me helped me grow as person and allowed me to develop a greater appreciation for the diverse culture I grew up in and considered normal.

Before moving away, I thought I hated Florida. After I spent nine months out of the year away, I learned to appreciate the unique characteristics of the Sunshine State. Seasons? Yeah, they’re a thing. Nothing compares to a Florida winter where you throw on a pair of shorts, leave your coat and boots at school and head to the beach mid-December. Not surprisingly, it’s also difficult to find real Spanish food in rural Maryland. I crave the Dominican food of my upbringing. Now, I love going home to my mom’s rice and beans or my dad’s breakfasts of Cuban Bread and croquetas, a type of ham pastry that he easily buys from Publix, a grocery store I now know is only common in the South. Home-cooked meals really hit the spot after three months of cold grilled cheeses and soggy Caesar salads, the only dining hall foods I could stomach after trying the a la carte pink chicken.

I also learned about the state I attend school in, Maryland. I’ve never witnessed people love their state flag more than Marylanders. During orientation week, I remember seeing the flag everywhere; on lanyards, on shorts, on t-shirts. Two months in, I bought a McDaniel College sweatshirt with the Maryland flag embedded in the logo. Marylanders love picking blue crabs, which apparently means cracking them open to eat. I picked a crab my first semester freshmen year, and I still can’t get the Old Bay off my hands.

After living in a city that stays “alive” 23 hours a day, I learned so much about the perks of living in a small town versus a huge city like Miami. In Westminster, I walk through fallen leaves to the Cup, my favorite local restaurant, and order an iced peach sencha tea from a waitress who knows my order by heart. In Miami, food is everywhere, but here I eat an apple freshly picked at the apple orchard just three miles from my dorm. I love getting to know my college town better and sharing new experiences with friends who aren’t from the area.

I often envy my fellow classmates who drive home to do their laundry instead of using the school machines. They take trips to their local doctor’s office because they’re more comfortable talking to their family doctor, but I don’t have that option. Now, I’m required to “be an adult,” whatever that means.

Before coming to McDaniel College, I never did my own laundry or go to the doctor alone. After two tutorials on laundry duty by my roommate (bless her) and a couple minor trips to the urgent care, I’m not afraid of independence. It’s hard not having your parents on call at all times, but it taught me that once I figured out what to do, I could truly consider myself an adult.

Going to school 16 hours away gave me a unique perspective on my culture and living life independently. If you’re on the fence about going to school far from home, do it. More than anything, I value the feeling of heading home on break and appreciating where I spent my childhood. I’m an independent 19-year old, and I owe it all to leaving my Cuban bread behind me and taking a chance on blue crab. 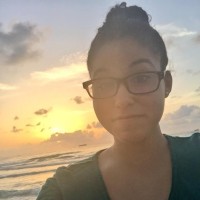 Probably the only Dominican-American, politics and theater loving, softball player you'll meet. Trying to reach my dream as a political commentator by pursing a Political Science and Communication degree at McDaniel College, Class of 2018.

Gen Eds: Not So Pointless After All
Next Post: Expect the Unexpected: Interesting Intern Skills