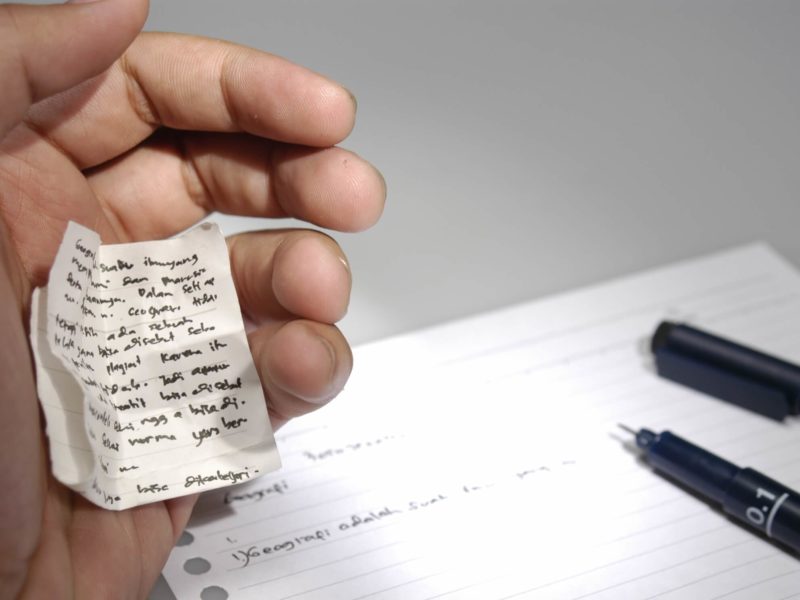 What a Cheat Sheet Taught Me About Studying

There are many stereotypes surrounding communications students, but one fits me far better than all the others: I’m bad at math. I don’t know whether the numbers just overwhelm me or the pure hated for the subject makes me glare at every problem with no hope. However, I passed all my math classes in high school and, after many long and torturous hours of tutoring, did decently on the math portion of the SAT.

After choosing to major in communications, I thought math and I had broken up. However, this wasn’t the case. I had to take two math classes to make the graduation requirement, so I figured I might as well get them over with my freshman year. My very first semester, I enrolled in Statistics 100, the introductory class. Easy, right?

Wrong. I figured if I went to most of the seminars, studied really hard and took all the quizzes and tests, I would pass. After the first two weeks, I realized my quiz scores weren’t good enough to pass the class, so I tried studying longer. My quiz grades didn’t get any better.

At this point, there was so much I could’ve done. I could’ve asked the teacher for extra help, gotten a tutor or asked one of my friends who’s a math major to help me out. I did none of the above.

By the time finals rolled around, it was freezing and attending seminars became less and less appealing. I was also mentally drained from the roller coaster of new experiences and responsibilities. I mean, I’m not complaining because most of the events I had to attend as a sorority pledge were fun. I lived for new experiences like joining clubs and canning for THON funds. Still, my busy semester didn’t leave much time to do practice math problems or find a tutor.

With two weeks before finals, my professor said the only words I understood all semester. “You may bring an eight by eight cheat sheet to the final.”

I rejoiced at the thought of beating the system. If I could write down explanations and formulas in a way I could understand on the cheat sheet, I could pass the final, and hopefully the class as well. Still, this strategy meant teaching and interpreting an entire semesters worth of statistics in just two weeks — not to mention that I still needed to study for all my other finals. I took on the challenge; I figured two weeks of pain was totally worth not having to retake the class.

My cheat sheet at the end of those two weeks had print so small I was debating bringing a magnifying glass to the exam. Nevertheless, I had done it. I fit a semester’s worth of material on a tiny piece of paper. I put it in my folder and didn’t even want to look at it again until the exam.

The day of the exam, I decided to go to the classroom early to take another look at my cheat sheet and memorize where the different topics were to save time during the exam. After I layered up and put on a scarf and gloves, I grabbed my backpack and headed to my classroom.

I got there with plenty of time to spare. After running into one of my really good friends I hadn’t seen in a while, I decided since I was a half hour early, I could stop to chat. We lost track of time while talking and understood everyone else rushing into a classroom to be our cue to get moving. When I got to my desk and reached into my backpack for my materials, it wasn’t there. The folder I put my cheat sheet in was still on top of my coffee table in my apartment, over a 15-minute walk away.

“There goes my grade,” I thought. I even debated if there was even a point in taking the exam. With my mind having gone numb from the shock of not having my cheat sheet, I almost didn’t realize that the person next to me was trying to hand me the stack of exams. During the test, I kept thinking about where the answer to the question would’ve been on my cheat sheet and beating myself up about not immediately putting my cheat sheet in the backpack. I also thought about how if I didn’t catch up with my friend and if I had noticed earlier, I may have had time to run home and grab my folder.

I can’t really explain how I felt as I walked back to my apartment that day; it was a mix of self-hatred, regret and failure. In my head, I replayed that time mid-semester when I should’ve gotten someone to help me. I thought about how I should’ve taken the course later when I knew what a college-level math course required of me. I thought of all the things I should’ve done, but didn’t.

By some miracle, I passed the exam and the class. I swore I would take a totally different approach to my second math course, and I did. From the first day of class, if there was anything I didn’t understand I would raise my hand and ask. I didn’t treat seminars as if they were optional because if I wanted a decent grade, they were absolutely not. And since the class used clickers for quizzes, I never once forgot to check if it was in my backpack before leaving my apartment. By the time finals rolled around, I knew I was ready and I didn’t depend on anything to get me through it except my brain… and a pencil.

Maddy is a senior at Penn State studying Journalism and Business. She loves traveling, iced coffee (even at freezing temperatures), and shopping from the comfort of her bed.

Previous Post:How to Make the Most of Your Gen Eds
Next Post:Learning to Love My Body and Myself