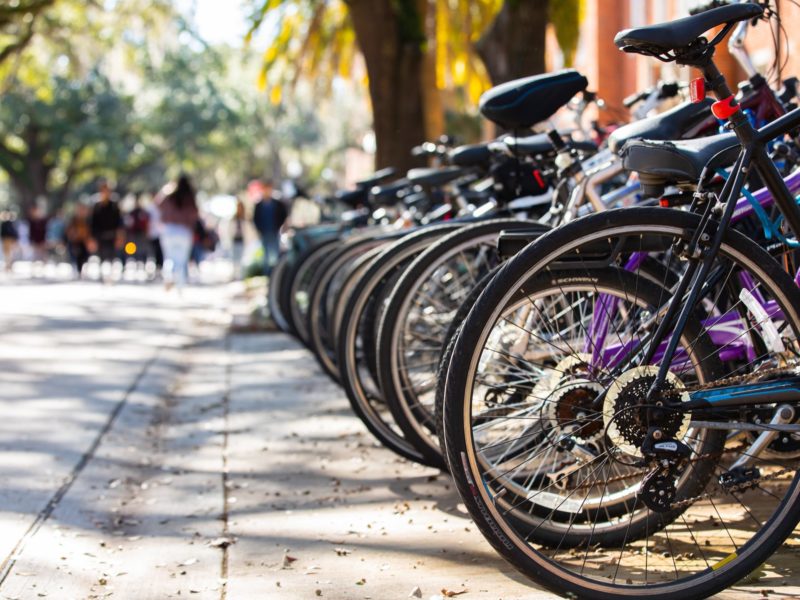 10 Transportation Trials and Tribulations for University of Florida Gators

Honestly, nothing makes a better day than getting derailed by transportation. Especially when you already possess the soul of Emily Gilmore from Gilmore Girls, organizing your schedule to best routes of commute and fastest options. Life can’t possibly get better. From late buses to expensive decal prices, getting around can be challenging and frustrating for a Gator. You may know of a few transportation changes the University of Florida desperately needs in order to improve student life.

Learn about 10 obstacles Gators face on the daily.

1. No school? Forget about it

A common complaint that reaches all those poor souls without wheels lies in the lack of transportation during non-school hours: evenings, weekends, vacations, summer. When classes go on, buses make frequent rounds, ranging from as quickly as five minutes to at most thirty. However, as the day trickles into night, the minutes in between stretch longer and longer. Waiting for a late bus becomes a sure fire way to making one curse his very existence.

“I went to the last season LSU game, which is one of UF’s biggest rival games, and the traffic was intense,” junior at the University of Florida Yanet Centeno said . “After the game ended, the one RTS bus that runs all night had a ridiculous wait time, like over an hour long. My friend and I decided to walk from the stadium to my apartment complex which is over seven miles long!” Going on a trek across town by foot as a final result tells you all you need to know about bus availability during non-school hours.

2. Got an hour to find parking?

UF parking lots mirror the Hunger Games in the desperate search for a spot as the clock ticks, marking your next class. The aggressive prowl sometimes comes up empty—no success. Until, alas, one appears. Oh, wait, no. Just your luck, it boasts that beautiful sign letting you bet your lucky dollar that you don’t get towed or ticketed. Ah, what bliss. Will you volunteer as tribute? “I was late for test one time because of parking,” freshman at UF Kyla Kulling said. “I ended up having to park in a faculty spot and leaving a note on my car begging them not to ticket me.” Desperate times call for desperate measures, am I right?

A huge round of applause to the person behind the Rider app that allows students to track the RTS bus system. However, a curse to the executors of the app. “The bus is not accurate with the wait time,” UF sophomore Fabine Michel said. Far too many stories of the app freezing, not informing of out-of-service buses or simply using lying trackers travel along the vine. One will attempt to plan your time accordingly and find what seems like the quickest option, only to be stuck in a rut waiting for a bus. “Sometimes you can only refresh the Rider app so many times before you realize the bus you need is still forty eight minutes away,” fourth year UF student Dana Steele said. Improving the rider app would save plenty of time for students.

4. Loaded enough for a decal?

Pinching pennies and living from paycheck to paycheck becomes the way of life for college students. Scraping up extra dollars for everyday necessities never fails to present itself as a challenge. Throw a car into the mix and now you have monthly payments, car insurance and gas purchases. On top of all of that, UF students then have to pay exorbitant amounts for decals, which work for a majority of lots and garages found on campus during restricted hours. The cheapest and smartest option lies in purchasing the annual decal for a “measle” a hundred and sixty dollars. When discussing transportation changes, student representative and third year UF student William Zelin said, “Expensive decal prices are a bit tricky. I personally do not have a decal for my car, because I simply choose to take the bus during school hours.” A way to beat the decal at its own game, it appears, lies in not buying one and using the affordable resources provided.

5. Wait—why are we are still here?

Can any bus rider give me something worse than sitting in a stationed bus stop? Even when making every single attempt to be punctual, we all tend to find ourselves crunching minutes to our destination. Some buses tend to take immensely long pauses at stops, simply sitting there and killing time. Each second ruins any chance of promptly getting to wherever you’re headed. Looking at the Rider App, one prays that the icon displaying the bus’ location will move. Let’s just say prayers keep going unanswered.

Results of attempting to be proactive against stationed stops can go awry. On UF sophomore Kristian James’ trip back home on the 126, he made the unfortunate mistake of politely asking the driver about any untimely stops. “She flipped out on me!” he said. “She was like, ‘what kind of question is that? It’s a bus. Of course it’s going to stop’ And I gently corrected her and said ‘yes but I just wanted to know if it was going to be stationed at that stop for a longer time.’ And she just kept yelling at me, and then she started ranting to herself.” Prepare yourself for striking a nerve in advance, though the story that comes might just make it worth it. Probably not, though.

6. Elbow to elbow, wrist to wrist

Imagine filing into a bus to find every seat taken. Don’t worry—you can hold onto the silver bar overhead and pray to make it through every jolt of the bus. At the next stop, it appears the entire housing complex needs to get to campus by eight o’clock. The bus driver yells to push back and climb up the steps. A foul smell slithers its way up to your nose and clenches your throat tighter than any snake would. Then all of a sudden, the bus brakes, sending you sprawling onto the person seated before you as the person in front of you uses your fallen body to catch himself. The true beauty behind the picture comes from the fact that all of this takes place in a span of three stops, when you have a solid sixteen more to go.“Why do buses continue to stop when they are completely full?”  junior student Valentina Cruz said. “Like what are you doing? No.” Busy routes should allocate more buses so they do not resemble the comical clown car tumbling out students.

Buses can only do so much in one’s non-driving commute around UF. Some classes lie so far apart that one can expect at least a fifteen minute walk from one building to the next. It’s a familiar sight, seeing a hurried student race through the walkways in between periods. Or better yet, watching a classmate enter the room slightly out of breath with a gleam of sweat beading down his forehead. When speaking to fourth year student, Bennet Myers, he suggested a genius change that will answer our prayers. “Having a bike rental system could take out all of the walking and sweating.” While on campus students can rent a bike for the day for a dollar or so, then return it when done. This solution can combat the interminable distances in between locations and eliminate sweaty breathlessness.

Okay, so we’ve all been there where we pulled an all nighter or went a little too hard the night before. You know those tantalizing extra minutes of sleep that beckon you to click the snooze button. As your bed becomes a black hole sucking you into its recesses, spending money that you do not have does not seem so bad. “I have also lost a lot of money Ubering,” senior UF student Dana Steele said. It’s a lose-lose situation—waste time or waste money. As anyone familiar with economics knows, time takes the spot as for most valuable commodity. So when one just wants to save the hassle, to hell with saving. “It would be really cool if the university could partner with Uber or Lyft to give kids a small discount on rides,” Dana said . “Everyone has mornings when they’re running a bit late.” A total godsend, such a program would bring sleep to the tired and food to the hungry (from all the spare change, of course).

How great is it to walk up to your car or scooter and find a ticket? Amazing, right? “I’ve gotten fined hundreds of dollars in tickets,” Bennet Myers said. The sheer joy of adding another expense thrown into the boiling pot loaded with rent, groceries, insurance and gas makes one want to jump for joy. UF also has a system in which the first ticket starts at one price and then each additional one increases until a cap has been reached. It’s usually around $55, making you that much more broke. Smack on another meaty fine and the pile of fees soon builds a mountain. A plausible compromise would be enacting a forgiveness system for students, with a warning for the first offense each school year.

Gators have  access to the Student Nighttime Auxiliary Patrol, also known as SNAP for short. SNAP provides free rides to students during the late hours between 6:30 p.m.  and 3 a.m.. However, because there are only seven vans in circulation, expect a lengthy wait time before one shows up. “I just felt like I could usually get places faster by walking,”sophomore Bethany Ryder said. “For me, it never takes the fastest route to places; like you loop all around campus before you get to where you need to be.” In addition, this program cruises routes only around campus, making it pointless for students that live off campus or commute places outside the university.

Alexa is a freshmen at the University of Florida. A lover for plenty of things from writing to film to working out, she struggles to pick favorites — but she will try! Her ultimate career dream is to become a full-time, critically acclaimed novelist or writer.

Previous Post:When Your Passion Isn’t Enough
Next Post:10 Ways to Say “I Love My Boyfriend” Without Being ~That~ Person