10 Interview Questions No One Expects

“How many licks does it take to get to the center of a Tootsie Pop?” Imagine you’re interviewing for your dream job/internship and this question is thrown at you. No amount of planning and research can prepare you for the insanity that can come from an interviewer with an overactive imagination. It’s important to answer out-of-the-box questions quickly because potential employers want to see how you manage uncomfortable situations. Pay close attention: These questions may be coming to an interview near you.

1. “If a penguin walked in this room right now, what would you do?”

Senior Jonathan Kaplan from Michigan State University was asked this question when applying for a business organization at school.”I would give the penguin a hug,” he said. “Because what else is there to do when a penguin walks in to the room?” I’d have to agree.

2. “If you could be any kitchen appliance, what would you be and why?”

An advertising agency really threw Penn State senior Nathan Buckler a curve ball when the interviewer asked him this one. He said he’d be a toaster oven because it’s very versatile. It can toast bread, bake cookies and heat up pizza. You can’t pass up a triple threat.

3. “What would your Harry Potter patronus be and why?”

University of Maryland senior Caroline Myers told a theater company she would be a dolphin when applying for their marketing internship. “Because they are smart and work well in groups,” she said. For those of you who don’t know (shame on you), a patronus is a spell that reveals the animal representation of yourself. Myers said she regrets laughing at this question and would have liked more time to come up with a creative answer.

4. “What are 10 ways to get balloons floating on the ceiling of the room to the floor?”

This question hit UMD graduate Michael D’Antonio hard when he was applying for a research internship. “The obvious answer would be to pop the balloons,” he said. But it isn’t always the obvious answers that secure the job, is it? D’Antonio, an electrical engineering and math major, stepped up his game and said he would “rename the floor the ceiling.” #genius

5. “How many ping-pong balls fit into a school bus?”

A consulting firm really made UMD senior Alexis Talia think on her feet. “It was a case study,” she said. “So they were more asking me to take them through the process of figuring out how to come to a reasonable number.” So she discussed the square footage of a bus. I have to admit, I couldn’t even begin to try and figure out the size of a bus.

An engineering internship tossed this thought-provoking question to UMD junior Katherine Camp. Camp thought like the engineer she is and knew how to answer this question perfectly. “Like most, I would want to select those close to me, but as an engineer, I have a responsibility to look at the greater picture, which in the long term would actually benefit my family’s lineage more so than choosing their own health,” she said.

7. “How would you build a spice rack for a blind person?”

This question came up when UMD sophomore Maddy Seymor interviewed for an executive assistant job at a non-profit organization. She said she would create cubbies for the individual spices, labeled in Braille. But how does a non-profit organization that has nothing to do with helping the blind come up with a question like this? “They probably wanted to see if I was creative or can think on my feet,” Seymor said. Even now, Seymor said she still can’t think of a better technique.

8. “What inanimate object would you be and why?”

When a wireless internet company asks you this question for a tech position, there may be a right and wrong answer. Good thing UMD junior Sara Hild said she would be a camera because she “lives in the moment and likes to capture every sentimental memory.” It worked.

A café asked UMD junior Lexi Fried to describe this beloved process step by step when she was applying for a barista position. Seems bizarre, but we all know you can never trust someone who bites into her Oreo (or her string cheese for that matter). Fried went a step beyond simply opening the cookie sandwich and said she only eats the frosting because the cookie gets stuck in her teeth. “The employer liked my logic and gave me the job on the spot,” she said.

10. “What would have a higher standard deviation, middle school or high school?”

You’ve got to be a math person to successfully answer this one. Good thing UMD senior Colleen Miller is a finance major, and answering this question was a piece of cake. She told the bank she was applying to that high school would have a higher standard deviation because compared to middle school, there’s more variability (like more grade levels, so more ages). If you’re applying for a finance job, be sure to brush up on your “basic” math skills. 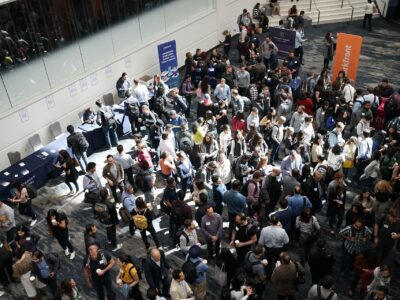 Previous Post:The No Man: Knowing When to Say No
Next Post:How to Avoid Making Enemies in Writing Workshops