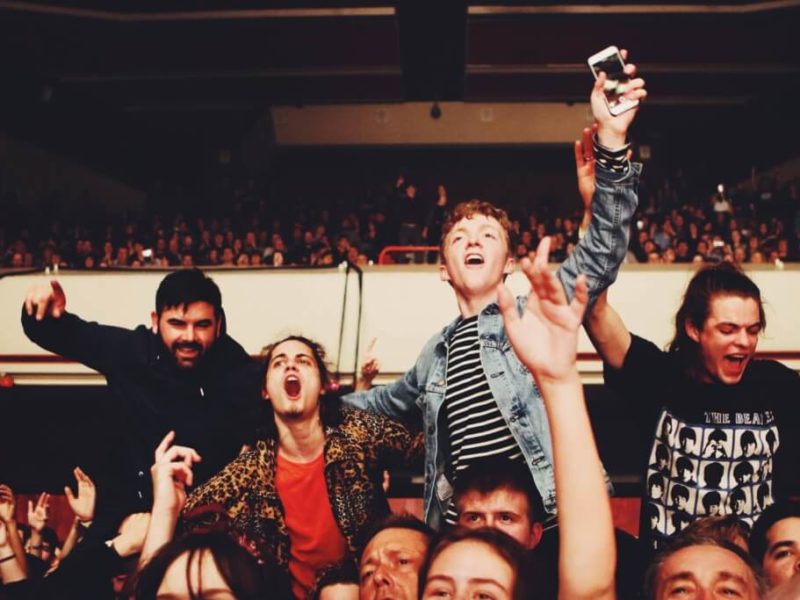 10 Concert Venues to Catch Your Favorite Artists in Tallahassee

As you meander along the backroads that lead to First Friday at Railroad Square, you hear the far-off cadence of a groovy rhythm. Intrigued, you cut through the masses of drunken hipsters and round a corner to glimpse a small group of musicians jamming on a stage in front of the train tracks. The singer wears what appears to be an alpaca mask while the drummer and guitarist sport tiger or fox masks themselves. You have questions, but you let them fade into the back of your mind because the music, tastefully coherent despite the polyester barriers that obscure their faces, draws you in. The crowd roars for more in the lulls between songs, while three college girls dance alone in the middle of a field, desperate to take up as much space as possible. This excursion, basked in the dying light of sunset will resonate with you and stand as a hallmark in your memory of the Tallahassee music scene.

Venture into the night and check out these 10 local Tallahassee concert venues.

The aptly named Moon remains one of the swankiest spots to wind up your night out. As the premier showcase in Tallahassee for some of the biggest names in music, the Moon hosts the likes of the Dirty Heads, Willie Nelson, Kenny Chesney, and Bassnectar. Its uniquely styled retro hall, decked out with a neon ambience, slightly resembles FSU’s on campus club, Club Downunder. The venue dually functions as the go-to spot for private events such as political speeches, the Governor’s Inaugural Ball and a performance by the Tallahassee Symphony Orchestra. “The experience was outta sight… it’s a cool underground scene for introverts who like to be social with a few drinks. I felt absolutely at home, so many festival feels when you walk around the place,” said Florida State University senior Al Harris. Complete with four bars, the Moon can quench your thirst while providing one of the most well-rounded experiences of your young life.

The frontrunner in intimate, laid-back venues, the Wilbury sits peacefully on the corner of Railroad Avenue and West Gaines Street. As a restaurant, it excels in southern dishes like BBQ pulled pork sandwiches and fried green tomatoes. As a concert venue, the Wilbury hosts a wide mix of bands from the likes of Swah Jah Vu and Twiddle, to Skizzy Mars and the Mountain Goats. Always understanding the plight of broke college kids, most shows at the Wilbury cost absolutely nothing to attend. This year, they agreed to partner up with FSU’s Student Union Productions to host future Club Downunder shows while the union undergoes renovations. Those shows will be free with a valid FSU ID. So enjoy the food, sip a beer and relax in their game room which houses a slew of activities, like mini bowling, shuffle board and billiards.

The often overlooked on-campus club at FSU sure packs a punch when it comes to content and entertainment. One wouldn’t expect more than student open mic nights and local standup comedy shows, but the staff at Union Productions doesn’t mess around. Club Downunder hosted big names like Com Truise, Quinn XCII and WHY? last semester, and that just scrapes the surface. “That’s how I met most of my freshmen friends and could meet up with people in my classes. It was just a great place to hang out and have fun,” said FSU sophomore Michaela Gerretz. The renovation of Oglesby Union hasn’t stopped Club Downunder from planning student events, since the Wilbury agreed to host future shows until the building goes up. Clear your schedule as Union Productions constantly pumps out events like game and trivia nights, live hypnosis shows and other themed events. See you all in 2020 when the new CDU opens.

One of Tallahassee’s not so hidden gems, Cascades Park serves as a beautiful green sanctuary among the bustle of the city around it. Many paths circle around the iridescent fountains that bubble up from the pavement or shoot skyward from the middle of ponds. Here, right down the hill from the esteemed restaurant, the Edison, lays the Capital City Amphitheater, the cornerstone of the park. This grandiose outdoor amphitheater attracts locals and out-of-towners alike with the promise of great music inside a serene setting where the music engulfs you like the crisp wind that blows down the hills. Whether it’s a local festival, a seasonal event like the upcoming Halloween Symphony or big concerts like Brightside and Train, the Capital City Amphitheater always delivers on its promise of great entertainment.

If you ever find yourself wandering down from Lake Ella and happen upon Thomasville Road, press onward to find Fifth and Thomas waiting for you. This homey restaurant prides itself on hitting your sweet spot with the culmination of excellent food and live music. As a restaurant you can find a suave array of cheese board and wine pairings, classic burgers or tailgate food like wings and chicken tenders. As a music house, Fifth and Thomas delivers on all fronts. The establishment comes complete with indoor and outdoor seating arrangements, a bar and live music area, all furnished in the fashion of honky-tonk chic. Though a few local Tallahassee bands like Hightest, That’s What She Said, and Catfish Alliance dominate the heavy rotation of musical group that Fifth and Thomas sees, the venue also hosts events like all vinyl DJ sets and night-long dance parties.

2017 marked an uncertain time for club life in Tallahassee. Everyone complained about every club, whether they thought them trashy, overpriced or somehow a combination of the two. Then Coliseum closed its doors and their masses of bartenders and bouncers scattered to whatever clubs that would take them. Soon after, Tabu closed, but students later found out that it would be reopened and redesigned under a new name: Baja’s Beachclub. The facelift came with a reworked layout of the interior, including a more spacious dance floor. Even before the added value of Coliseum’s finest staff members, the club has reinvigorated nightlife on Pensacola Street with its fresh host of talent and special events like post FSU football game parties. If you’re a fan of hot new electronic music, Bajas delivers. Borgore, San Holo and Space Jesus have circulated through here, with more on the way this fall.

While this treasured Tallahassee event deserves its own article, it serves as an outlet for local bands and musicians since the Square sports several stages for performances. For those who don’t know, First Friday takes place (aptly) on the first Friday of every month at Railroad Square, just between the train tracks and FAMU. The collection of warehouses function as art galleries for local artists, playhouses for local bands and establishments for so much more. Antique stores, a pinball arcade, a glassblowing workshop, First Friday has it all. As for music, you can catch live bands out on the courtyards, in cozy and intimate art galleries, or even on a street corner. Whether you happen upon a ragtag brass group, a thrown together drum circle that encourages passerby’s participation, or established bands like Folktale San Pedro, you won’t have a dull moment at this art park.

First and foremost, the Backwoods Bistro wins awards for their service and atmosphere. “It’s super fun working there, everyone is chill and it’s a big family. The food is beyond amazing and it’s just good vibes,” said FSU junior and the Bistro employee Giselle Chusan. Their notion of treating everyone with excellence extends to the customers as well. “It was a really neat place. Very Earthy and had great food. I had the stuffed mushrooms for an appetizer and apple brie sandwich with peanut butter cheesecake for dessert. All around it was great,” said FSU junior Brett Farren. Don’t sleep on their live music scene. Every night from Thursday through Saturday, the bistro books local sets of some of the hottest names in Tally’s underground, like Your Scumbag Neighbors and the Frank Jones Band. Be sure to drop in for their local tap takeovers, with full schedules available on their website.

Standing proudly in the shadow of ONYX and just down the street from Westcott fountain lays Potbelly’s and its adjacent cousin, Painted Lady. A favorite among grad students and the first club experience of many freshman who live near that side of campus, Pots has all the appeal of a laid-back outdoor beach club, while still contending with some of the larger clubs in the city. Whether you go for happy hour on Fridays or you want to drink yourself silly on the aptly name Purgatory Thursday, you belong here if you want a good weekend. Between them and Painted Lady, you can visit well over a half dozen rooms and spaces for DJs or live music, including a large outdoor spot behind the building that’s seen the likes of Big Wild and Asher Roth.

Tallahassee’s twist on the popular restaurant/arcade chain Dave and Busters, Fire Betty’s will plunge you back into your childhood. Only this time, instead of begging your parents for extra quarters, you’ll be begging your friends to help you down another round. This arcade comes complete with a full bar and offers your ordinary happy hour (from 5-7 p.m.) with extraordinary drinks. Try a craft beer or their signature “Sweet Fighter,” made with sweet tea and moonshine. Not only do you get to play a vast variety of video games, both vintage and modern, but you can also enjoy a live show as the venue hosts local talent on their stage. Taller Trees, Slow Low Crow and numerous other fine Tally bands have come through here. So grab a drink and get ready to lose a game or two of life size Jenga cause you already downed two Sweet Fighters. The night has just begun.

Previous Post:Dating Freshman Year Is One of the Worst Things You Can Do
Next Post:I Chose a Random Roommate and Lived to Tell the Tale