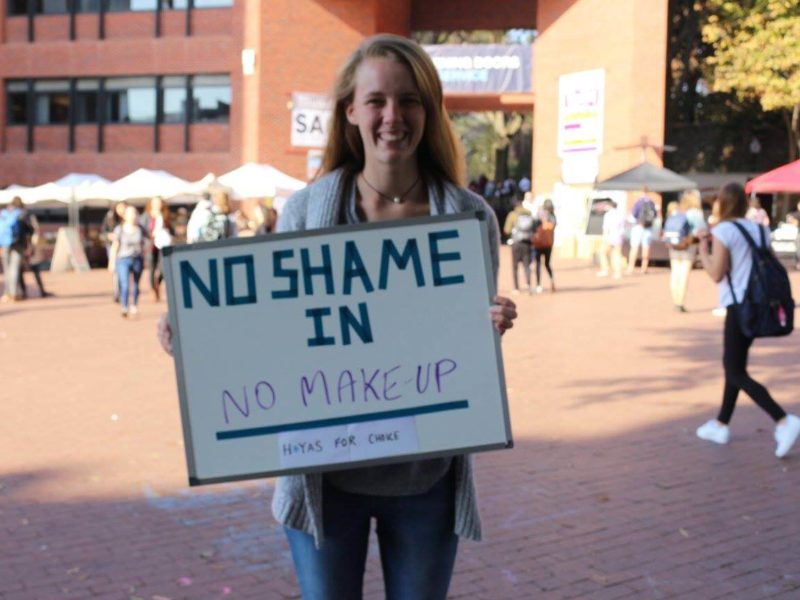 Why My Freshman Year Nickname Was “Condom Queen”

When I first left home for college, I would not have considered myself an “activist.” I felt fairly secure in my political views. I identified as a feminist. And I felt proud to be named after an important American suffragette (Elizabeth Cady Stanton… look her up!).

But I didn’t spend my weekends making poster boards for protests or adding frames to my Facebook profile picture for issue visibility.

And yet, every once in a while, something about you or your identity seems to stick so securely to you that everyone feels the need to label it with a nickname.

In my freshman year of college, mine just happened to be “Condom Queen.”

In my first week at my college, Georgetown University held an activities fair on the front lawn of campus. Clubs, sports teams and campus newspapers each attempt to woo new students into signing up for their email lists.

While most groups table on the grass, a handful of organizations set up off to the side in Red Square, an area close by. With my freshman roommate, I cautiously made my way over to the tables.

A huge purple sign for “H*yas for Choice” (a sex-positive reproductive justice group that I later learned was unrecognized by the university), caught my eye immediately. Its members stood in the square handing out envelopes and, to my shock, condoms and lube. I approached the table with curiosity and asked the student representative why the group handed out so much free contraception.

“The university doesn’t supply them to students, so we decided that we would instead,” she answered.

As it turns out, Georgetown’s Catholic/Jesuit identity prevents the distribution of free contraceptives (condoms, dental dams and in some cases, birth control) by the school’s health center. It also creates rules against the sale of condoms anywhere on or near campus grounds. The nearest place to buy them is a CVS more than half a mile from campus.

I was both amazed and appalled, and felt especially disgusted that the university refused to sell condoms on campus. While I’ve always been one to respect religious differences, I thought it would be quite clear to all administrators that a lack of condoms won’t stop students from having sex: it only stops students from having safe sex.

Since that first week, HFC has become my favorite club on campus. For two hours a week, I sit at a table in Red Square with two other HFC members handing out condoms, lube and dental dams to whoever asks for it. I attend biweekly meetings of the organization, help organize events, bake for fundraisers and attend counter-protests and speaking events.

The most significant part of my involvement in the club is our “condom envelopes”. At the beginning of each year, HFC hands out manila envelopes for its members to decorate with puns, stickers and drawings. Students then tape the envelopes to the outside of their dorm room door and fill them with condoms and lube, replacing the items as students take them for their own use.

I lived on an all-girls floor my freshman year (by random assignment I may add). I received many dirty looks and whispers behind my back for hanging the envelope on my door. Apparently my choice to supply free contraception to everyone on the floor designated me as a scandalous individual.

Soon enough, a friend who lived one floor below me informed me that I got a nickname because of my envelope: I was officially the “Condom Queen” of Harbin Nine.

When my friends back home heard of this, the name stuck. I opened weekly snapchats of bowls of condoms and even received a coffee mug with my new name on it for Christmas that semester.

As the semester progressed, I remember vividly how nervous I felt as Parent’s Weekend approached. I considered my parents’ possible reaction to my new passion. Would they feel uncomfortable with the envelope of condoms and lube on my door? Would they seem disappointed in me for joining a club that the university won’t recognize?

But in reality, none of my fears were realized. My dad, in particular, supported my efforts and of all my relatives, found my new nickname absolutely hilarious. “My daughter the ‘Condom Queen,’” he laughed. “I can’t wait to tell all of my coworkers.”

HFC also does important work on campus as an advocate around other areas of reproductive justice. The largest collegiate anti-abortion conference occurs at Georgetown every January. HFC distributes information about the ways in which the speakers undermine a woman’s right to her body and stands outside the conference in a counter-protest.

The organization has also created many initiatives around the student health center on campus. When the student health insurance policies threatened to stop covering birth control for students (which was only offered in the first place for reasons other than contraceptive purposes), the club leadership started a phone campaign to ensure the policy changed.

I made a 10-foot long poster to hang on campus with the phone number and information for calling the school administration. Soon after our demonstration, the policy changed.

Because of its pro-choice basis, HFC cannot receive any university funding. It’s not in any way formally recognized or sponsored by the school. We can only table in “free speech zones” on campus. Any time we need to reserve a room for an event, HFC must do so as individual students and read a lengthy disclaimer before the event to make it clear to all attendees that it was no way supported by Georgetown. Condom envelopes are only allowed to hang on the doors of dorm rooms/apartments because they are also considered “free speech zones.” and RAs cannot hang envelopes because they are employees of the university.

Most recently, HFC announced their new initiative to distribute emergency contraception (otherwise known as the “morning-after pill”) to Georgetown’s campus for the first time. The nearest available store for purchasing the emergency contraception is over a mile from campus. The group also helped bring members of Planned Parenthood, feminist writers, such as the founder of the website Reductress, and many others to campus.

I knew when I applied that Georgetown it was a Jesuit university. But I had no idea how much this identity affects the day-to-day life of students, especially in terms of ability to access contraception (a right that I believe is vital to college life).

This reality of my university quite obviously puts a bad taste in my mouth. But it also gave me an amazing opportunity that I wouldn’t get anywhere else.

The HFC community has not only aided me in gaining friendships but also in solidifying my political beliefs and affording me a platform to express my passion for reproductive justice.

Previous Post:I Know You Hate GE’s, but Let Me Tell You Why They’re Great
Next Post:Apparently Sexism Is Alive and Thriving in the Classroom