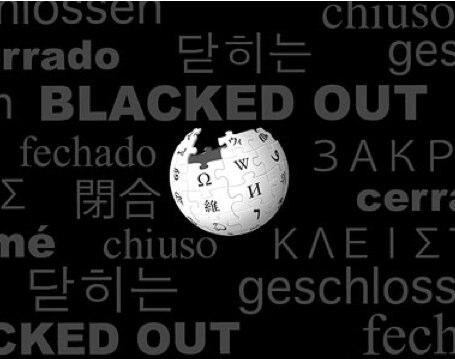 Where Did the Internet Go? Blackout Protest Against SOPA

Kristen LottJan 18, 2012
Home » Latest Posts » Where Did the Internet Go? Blackout Protest Against SOPA
FacebookTweet
Today is the day the Internet disappears. But it’ll be back tomorrow, promise. In protest of the Stop Online Piracy Act and PROTECT IP Act, sites like Wikipedia have blacked out their websites. This act of dissent was planned for today, Jan. 18, and many other websites have chosen to do the same in the #SOPASTRIKE.
So at this point you may be asking yourself, what’s wrong with SOPA? Stopping piracy is good, right?
Maybe you’re in the dark (literally) thinking, "I have no idea what SOPA and PIPA are, and they could be Broadway characters for all I know since Wikipedia is gone." (This is how I feel without Wikipedia.)

SOPA, known as “The Great Firewall of America,” is a bill in the House of Representatives designed to fight online copyright infringement and counterfeit trafficking. PIPA, Preventing Real Online Threats to Economic Creativity and Theft of Intellectual Property Act of 2011, is a similar bill existing in the Senate.
However, the vague wording of the SOPA bill has the Internet up in arms. The government could potentially start taking down legitimate websites, not just the “rogue” foreign sites it intends to stop. This censorship would be similar to that in countries like China and Iran. By now, you probably think I’m exaggerating.
Unfortunately, any site that “hosts user-generated content” or even simply has a search function could be targeted, according to the Electric Frontier Foundation. Their “What’s Wrong with SOPA?” flyer also details a major flaw: the bill would probably not even stop piracy.
Many skilled Internet hackers could bypass the walls put up by the government, but the “casual user” could be faced with major websites being taken down by corporations and individuals. Theoretically, there could be a world with no Google, no Facebook and no Wikipedia.
The Internet has decided to give the American people a taste of what Internet censorship is really like, hoping to prompt citizens to call their state representatives and protest SOPA. Reddit is also participating in the blackout, and Google has planned to post a link on its homepage protesting Congress’ attempt at anti-piracy. Lengthy lists of other websites are participating as well, such as Imugr, TwitPic and Mozilla.
The nonprofit organization Fight for the Future explains the blackout and calls the American people to action: “On Jan 24th, Congress will vote to pass internet censorship in the Senate, even though the vast majority of Americans are opposed. We need to kill the bill – PIPA in the Senate and SOPA in the House – to protect our rights to free speech, privacy, and prosperity. We need internet companies to follow Reddit's lead and stand up for the web, as we internet users are doing every day.”
More than 350 companies support SOPA, like The Walt Disney Company, NBA and NBCUniversal, which means money and power stand behind this bill. Yet if so many companies support it, while so many Americans are opposed – what does this mean? Do you think SOPA has the power to bring ruthless censorship to the U.S.? Or will Congress only use the bill to seek out true piracy sites?
FacebookTweet
Life