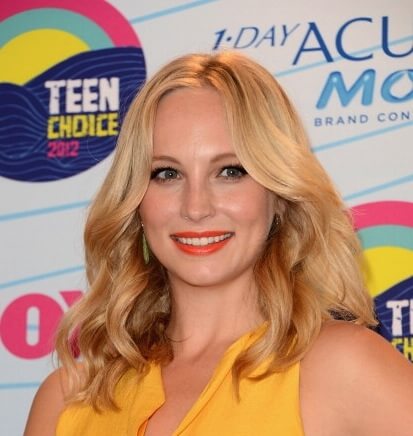 She’s been in a number of roles throughout the years and if she has yet to catch your eye, you simply haven’t been looking. This 25-year old go-getter plays Caroline on the hit show Vampire Diaries, a character she says is not far from her own personality. “I will use any excuse to host a party which is a very Caroline thing to do,” Accola explains. “Inevitably after four years, Caroline and I will have quirks and cadences and things in common. It’s mostly because we’re both in such a developmental time in our lives.”

In just three short seasons, Vampire devotees have watched Caroline transform from “queen bee bitch of Mystic Falls High” into anything but. Accola, quick to faithfully defend her character, explains, “Her entire life revolved around popularity and whether boys liked her or not. The writers really dug deep within her insecurities and gave reason to her pettiness … by season two, when she turned (into a vampire) she just flourished into such a strong young woman.”

The fourth season, premiering in October, will have plenty of surprises to keep your blood boiling. “[Caroline’s] going to eventually find out that Klaus has taken over Tyler’s body. I have a feeling she’ll have some choice words.”

Having moved to Los Angeles before even finishing high school, Accola’s fierce passion for acting is apparent. What many may consider a poor decision paid off–Accola was flaunting her role as a backup singer on Miley Cyrus’ tour shortly thereafter. She then scored roles in How I Met Your Mother, Supernatural, Greek, Drop Dead Diva, and Juno. Now, if that’s not a good resume, we don’t know what is!

Fans eager for their Accola fix don’t have to wait till the latest season of Vampire Diaries. You can catch the young actress on Hulu. Accola recently wrapped her role as the lead on Hulu’s Dating Rules from My Future Self, where she plays 26-year-old Chloe Cunningham–a jaded and cynical woman that’s horrible at dating until she starts getting messages from her future self, who opens her eyes to the terrible lonely direction in which she is heading.

For those of you pushing and shoving for your 15 minutes of fame, she’s provided us with her secret to success.  “The best advice I have is pursue,” she says.  “You must be ready to work really hard on the auditions to then be told, ‘You’re just not what we’re looking for.’  Let that be okay.  You aren’t going to “be” every role just because you can 'act' it … You have to work.”

But when the hard work is over for the day and the stage lights turn off, you can find Accola out on the town going hard… on the antique shops.  “I like to cruise antique shops like an 80-year old woman…” she says,  “for real!”

Vampire Diaries is back on the CW October 11, and you can catch Rules for Dating My Future Self on Hulu–the latest episodes are available now!