Ever have your worst nightmare come to life? For the University of Florida sophomore Gilmer Rojas, it did. He woke up to a call from his girlfriend at 3 a.m. on Sept. 16 and quickly realized a bat was flying back and forth inside his bedroom. Panic ensued. He jumped to action with the help of his roommate and trapped the creature with a cardboard box before releasing it safely outside. Where’s Bruce Wayne when you need him, right?

“I sleep with my lights on now,” Rojas said.

If it wasn’t clear enough: Rojas and other residents at West 20 are dealing with a bat infestation. Please keep them in your thoughts and prayers.

Rojas said how earlier in the evening, he left his bedroom to follow the sounds of flapping in his apartment’s common area. Expecting to see a lost bird, he instead met two bats ricocheting off his walls. (How he got through the entire ordeal without shedding a single tear, the world may never know.)

“We hid in the bedrooms for a while,” Rojas said. “After we felt a bit braver, we crept outside. I saw our cardboard cutout of Pitbull on the floor, the common area in a mess and then I caught a glimpse of a bat on the floor.”

Rojas said he and his roommate, UF sophomore Lucas Grinspan, shortly discovered how the bats entered unit 931 after shutting the bedroom door again. They looked up to see the air conditioning vent wide open, hanging from the ceiling by only two screws. If the Scooby Doo gang should invite anybody into their squad, it should be these two. Rojas, equipped with a broom in his hand and a cardboard box on his head, shooed out the bats. A true knight. Step aside, Lancelot.

Brian Pope, Director of the Lubee Bat Conservancy, said he believes the bats in unit 931 most likely entered the building for shelter and got lost while looking for exits. Bats do not typically seek out the indoors, he said. Pope added that bats don’t chew, tunnel or destroy anything. However, their feces and urine can cause damage, yikes. He warns those who encounter bats to call animal control immediately, and to refrain from touching them, as bats have been known to carry diseases, such as rabies. If only we had “Michael Scott’s Dunder Mifflin Scranton Meredith Palmer Memorial Celebrity Rabies Awareness Pro-Am Fun Run Race for the Cure,” in reality to save us.
Pope also added that the conservancy does not tag or monitor bats. He believes the bats Rojas encountered are wild and native to Gainesville.

West 20 maintenance worker Andrew Miranda said the bats primarily enter through the roofs and reside there. This issue has been going on for about a year. Miranda added that buildings three, four and nine receive the most complaints regarding bats. Perhaps bats just really dislike numbers three four and nine.

“I’ve never heard of bats actually inside units before,” Miranda said. “They normally get into the vents from the roof and then stop the air conditioning from working. Usually, they stay there due to the screwed-shut vents, and never make it into the actual unit.”

According to Miranda, the maintenance staff at the apartment complex is currently placing black tarps over openings in the roofs, where staff believes the bats enter from. This operation began on Sept. 15. Miranda said the tarp allows bats to exit, but not enter, the roof. (We are currently unsure if this tarp solution works on Batman, but probably not. Who would want to keep him out, anyways?)

Other residents at the complex have also faced bats during their stay. Please pray for them too.
Rami Hatem, resident and previous office staff member, said, “Earlier this semester, I woke up at 6:30 a.m. for work and felt trapped in my apartment. There were about 20 bats swarming my corridor on the third floor.”

Hatem said he was forced to sprint through the bats to reach his car. He covered his skin as much as possible to prevent potential bites. Note: even though vampire bats are a thing, vampires are not… I hope.

“If I waited any longer, I would have been late for work,” he said. “I had no choice.” Hatem believes the strides taken by West 20 to control the presence of bats in the complex have been helpful. He also said the pest control’s inspections and removals have made him feel safe again, and doesn’t think he will have another bat-infested corridor.

Another resident Sydney Shriver said she once saw a dead bat by her car. She added that she left the bat there, too scared to touch it. We don’t blame you, Sydney.

Member of the West 20 office staff Kerrie Diefendorf said, “We hired a pest control service to conduct attic inspections and remove pests here at the complex. They came Sept. 4, and they have been working hard to solve these issues through their inspections and removals.”

The general manager of the apartment complex Cher Musgrove would not comment on the presence of bats at the complex. We don’t blame her, either.

Filed Under: Life University of Florida 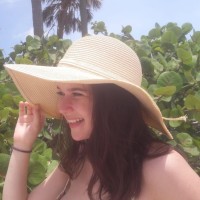 I'm a sophomore in journalism at the University of Florida. In my free time, you can find me on a lake with my rowing team, collecting new exotic houseplants, or sleeping in a hammock on campus.

How to Nail the “Why Should We Hire You?” Question Without Bragging
Next Post: This Two-Time Bar Crawl Champion School Couldn’t Handle Model UN