Shop now
Home » Latest Posts » Tweet it, Snap it, Care About it: Social Media and the 2016 Election
Politics Social Media

Tweet it, Snap it, Care About it: Social Media and the 2016 Election

It’s difficult to imagine a time when information wasn’t a swipe away. Believe it or not, technology wasn’t so accessible, and elections weren’t always this covered. This influx of information at your fingertips forces candidates to change their strategies in order to keep up with these technological evolutions.

Think back to 1960, when Richard Nixon John F. Kennedy competed for the presidency. By today’s standards, the coverage of their historic debate may seem primal, but at the time television was the way of the future. As the first televised debate, appearance was everything. The youthful Kennedy looked presidential and prepared while the older and recently hospitalized Nixon refused to be touched up with makeup and sweated his way through the debate, looking sickly. Seeing the two speak live provided a sense of transparency that now, in 2016, is aided and also harmed by social media. Once something is said, it’s on the internet forever. Also, because videos and updates posted to Facebook can be edited, appearances and reality can be difficult to differentiate.

“We know far more about candidates and they’re under the microscope even to a greater extent,” Penn State political science professor Zach Baumann said. “Everything is available to all people all the time, and so there’s just much more scrutiny on individual candidates’ campaigns, which causes them to run a slightly different campaign or to think about messages in a different way.”

Whether we’re talking about traditional print media, cable networks or social media apps like Twitter, Facebook or Snapchat, media coverage of elections has changed in recent years with the evolution of technology. Obama’s 2008 campaign tipped the scales of millennial involvement as it utilized Facebook to spread awareness about the campaign platform. The 2008 election displayed how political conversations through these platforms could engage millennials more than an a CNN or FOX broadcast.

President of Penn State’s College Republicans Brad Simmons exemplifies this social media craze as he consumes most of his news content from Facebook, one of the most instantly gratifying social media platforms. “All the popular news sites I like to read online post articles quickly, and [I] end up going to their actual news sites,” Simmons said. “Which is why I think social media plays such a prominent role because all the news sites are using it.”

Through the use of various platforms, Baumann explained the possibility of individualizing candidate messages directly to actual voters, rather than letting information just sit on a news site’s homepage. Live tweeting primary debates and snapping candidates on the campaign trail creates a sense of familiarity to young voters and makes it more personal. It’s almost like candidates are part of our #squad as we constantly check their snap story. This in turn strengthens the relationship between candidates and millennials.

Creating that relationship is essential to candidate likeability. Popular sites like Facebook or Twitter give people the opportunity to utilize their news feeds, which specifies the types of content based on certain ideologies shared by friends and family. “People tend to surround themselves with people who are like them, so again, you’re just consuming media that is kind of pre-screened to be approved for you, which is having some bad effects, I think,” Larkin said.

These “bad effects,” lead to one-sided and biased opinions some voters tend to have. Even with endless election information directly at your fingertips, Baumann poses an important question about how millennials use this material. “It’s just a question of whether millennials are actually going to engage in the process, or whether they’re going to change their Facebook profile, tweet about something and move on with their lives.”

However, this specification in our timelines and news feeds allow for negative effects. People have the ability to pick and choose what coverage fits their ideological beliefs. It’s no longer a one-stop shop for objectivity.

PSU sophomore Olivia Hogan explained she consumes her news primarily through Twitter because of its accessibility. And while Hogan learns more about the election, she feels social media outlets are “reaching an audience that may not be super into politics,” and which allow new voters (most of us millennials) to gain a better understanding of the candidates. “I know who I don’t support more than anything,” she said.

Having access to news through social media outlets advances the preceding election, but one has to wonder whether there’s a disconnect. Does it allow students to learn or just learn more? 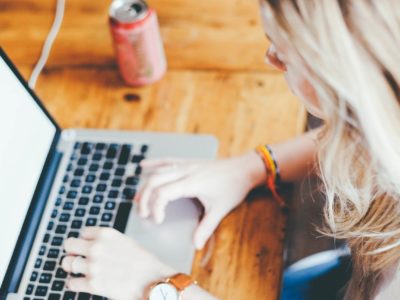 10 Best Blogs That College Students Would Totally Approve Of