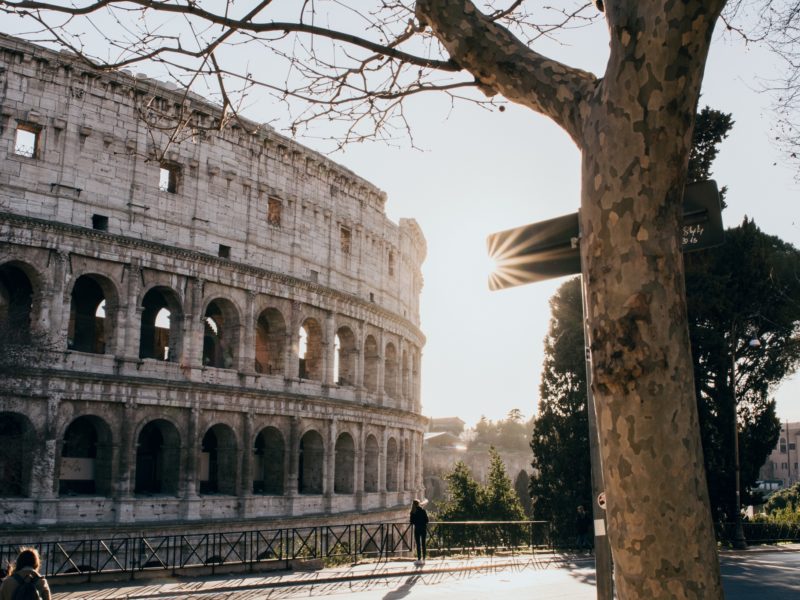 I Travelled to Another Country to Avoid My Ex-Boyfriend

Nina HoltzMar 18, 2019
Home » Latest Posts » I Travelled to Another Country to Avoid My Ex-Boyfriend
FacebookTweet

February in Rome is a rainy month, but the first time I went to the Colosseum the sky was clear enough for me to break out my sunglasses. I’d only been in Italy for a week, just getting used to my new classes and apartment. Some things were strange, like the lack of a dryer, or the sound of my neighbors arguing in Italian. But other things felt oddly familiar. There was a cereal aisle in the grocery store. American music played in the cafes. Eager to explore the city, at the first sign of sun my new roommates and I headed to the Colosseum.

The Colosseum is one of the most iconic landmarks of Rome. Seeing it in person does not disappoint. Looking at the enormous structure, you imagine phantoms of Roman gladiators fighting to the death inside. The sun shone down on the crumbling stone of its arches. As my roommates laughed and took pictures together, all I could only really think about how much I wanted to tell my boyfriend about the experience—or ex-boyfriend, I kept reminding myself.

When I applied to the study abroad program in Rome, my boyfriend and I decided that we would stay together even while I traveled to Italy and he stayed in Maryland. We knew that we could handle the long distance. He was from California, so we always spent the summer apart. Everything seemed to go according to plan until just a few months before I was supposed to leave. We broke up, horribly, and even worse I still had to see him because of all of our mutual activities.

I would take study abroad as the opportunity to get away from all of my problems in Maryland and spend the semester eating gelato and drinking cappuccinos.

Things, of course, did not go entirely according to plan. Rome may be beautiful, but there are many things about study abroad that are frustrating and hard. In the brochures, you see pictures of smiling college students overlooking scenic views. The scenic views are there, but what the brochures don’t tell you about is waiting in line for hours to get your permit to stay. They don’t mention that the walk to school is actually a climb of five flights of stairs. They don’t tell you that the walls are thin in the apartment buildings, and your neighbor likes to watch Italian soap operas until 1 a.m.

My package got lost in customs. I got sick. I felt lost in a big city. When these things happened, I just wanted to call him.

Instead, I figured out the customs forms. I scheduled an appointment with an Italian doctor. I learned how the bus systems work. And I did it all myself.

My first month in Italy, I stumbled on a small market close to my apartment building. It was just a few stalls selling fresh fruits and vegetables. I almost walked past it, but the bright glow of the oranges reflecting the sunlight caught my attention. I bought four, and as the fruit seller weighed my items, he handed me half of a clementine to try. The fruit was so ripe that juice ran down my fingers as I ate it.

“Si, dolce,” I said. It was the best clementine I’d ever eaten. I paid for my oranges and chose to walk home rather than take the bus.

Trying that clementine at the market marked the first time I felt at home in Rome. I now go there every week to buy my fruits and vegetables. I like to go without any idea of what I want in mind and buy whatever catches my attention. I’ve yet to be disappointed.

A few weeks ago, I called my friend at the University of Maryland to catch up. We’re both friends with my ex-boyfriend, and I dared to ask her about him.

I suddenly felt dizzy. Ears pierced? What would that even look like? It hadn’t occurred to me that while I was changing in Italy, he might be changing, too. I’d imagined life in Maryland as static, things staying the same while I enjoyed abroad. I finished talking with my friend and lay down on my bed, trying not to think about what I left behind.

I had vague plans for a rebound relationship while abroad, thinking I’d meet a beautiful Italian man named Fabian or start a fling with a British exchange student. As weeks passed by and no handsome men were in sight, I found a new love instead:

I began devoting more and more time to exploring the city, going to pop-up vintage stores, exploring new neighborhoods and trying street food. Soon after, I got addicted to supplì, a traditional Roman food, and went on a personal quest to find the best cannoli. I went to local bars with friends and saw the premiere of an American movie, complete with Italian subtitles.

Last weekend, my friend visited me in Rome. Her visit gave me a chance to show everything I’d learned. I knew where to go in the Vatican Museums and could point and give lectures about Michelangelo from what I learned in my art history class. We went to the Colosseum, Pantheon and the Trevi Fountain all in one day. Our last stop was the Spanish Steps, made famous by Audrey Hepburn’s movie Roman Holiday. We climbed to the top of the steps just as the sun started setting.

I watched the sky turning orange over the beautiful view. For once I didn’t think about my ex-boyfriend at all. Rome had my full attention.

Nina Holtz is a junior at the University of Maryland majoring in English and communication. She enjoys puns, food and puns about food.

Previous Post:In a World Full of Leaders, I Became a LeadHER
Next Post:5 Books to Read Based on Your Netflix Favs