To Bend or To Break

Has anybody else reading this seen “Resident Evil 6?” I didn’t think so. I’m typically pretty humble, but for one second, I’ll put my Tiara of Humility aside and crown myself “Best Girlfriend Ever” for having willingly sat through that joke of a film. I can handle guts and gore, I can handle scary, but I cannot handle bad acting and a shitty plot. Props to Milla Jovavich for doing her thing – again and again and again. She must be making insane money for these films. But Milla… I ask you… for what price?

Moral of the story, Parker wanted to see a comedy, maybe one of those quirky weird dramas like “The Master.” But Parker’s boyfriend wanted to see “Resident Evil 6,” and in the spirit of giving, she acquiesced. Granted, I wanted to gouge my eyes out for the majority of the film, but more than that, I knew it would make him happy, so how could I really say no? We had the entire theater to ourselves, and luckily, this comfortable atmosphere gave us the ability to provide our own color commentary on the whole shitshow of a movie. Somehow, being with him and laughing at the ridiculousness of it all made the experience laughable, instead of painful, and I was more than satisfied with my decision when all was said and done. Plus, he now owes me a favor, cinematically speaking. 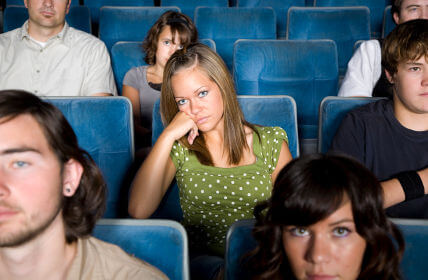 If you’re doing this whole “love” thing right, you’ve encountered a few situations where you and your significant other share differing view points. Maybe your new beau wants you to stay in for a night, a night that you were really counting on partying and letting loose with your best friends. Or perhaps you’re concerned about his “social smoking” habit becoming a little less social, and a little more frequent. There will be occasions where you and your partner struggle to see eye to eye, and this can prove to be a huge challenge, especially for those who put ego ahead of logic. But it’s important to pick your battles carefully – as you begin to grow accustomed to being one half of a couple, don’t ever forget that above all else, you are one hell of a person. This is why it’s so important to choose when to bend, and when you’ll break.

It’s difficult to look outside yourself. When you start spending more time together as a new couple, chances are you’ll begin to see in your partner some things he can’t see for himself. One of the aspects of a functional and rewarding relationship is that within the safety of your bond with your partner, you can both try to improve without fear of criticism. Knowing that he only has your best interests in mind –if the relationship you’re in is a healthy one – you should sincerely try to hear out his opinions. Don’t immediately take offense if he mentions you look tired lately. Think about it. Have you been pulling all-nighters studying, or been out late a lot this weekend? Perhaps he has a point. And if you can toe that line between being a caring girlfriend, and being his second mom, help him to improve as well. Those billboards on the subway this summer, depicting the sickening amounts of sugar in soft drinks, have instilled in me a new fear of soda. If your gamer boyfriend ingests a frightening quantity of Mountain Dew, it might not be the worst idea to mention a potential cutback. As long as you’re working hard to improve your significant other as an individual, he should see the concern and good-hearted intentions behind this discussion. And if he’s having trouble, make it more clear for him. Communicate, girl.

If only all relationship difficulties were this easy to solve, so black and white. But there might come a time where you feel as though your very character is being called into question.

Take me, for example. I’m bland and picky and I hate trying new foods. But my boyfriend loves trying new things. I’m realizing my own closed-mindedness, and the two of us are working on broadening my culinary horizons, one gourmet adventure at a time. On a recent vacation, my manfriend and I were exploring the streets of Philadelphia for a quick lunch venue. He suggested a restaurant that wasn’t exactly #1 on my list. The name escapes me, but it said something about a “communal table.” Not really my style. My stomach rumbling hard, I took one glance at the menu and realized I would not be leaving satisfied – it’s a decision every girl must sometimes come to terms with. But for the sake of being adventurous, and to please my man, I followed him inside and tried to order something edible: some sandwich thing.

It’s ridiculous. It’s stupid. But when it finally came, I looked at this grilled chicken sandwich with mozzarella and pesto and basil and tomatoes and other weird green stuff, and my heart kind of broke a little. My eyes watered and I couldn’t force myself to take another bite. I’m not anti-health, but I am, in the truest sense, a “meat-and-potatoes” kind of girl. To me, those five triangles, “artfully” arranged on a cutting board with random greenery, seemed to symbolize my sacrifice, but why?

Let me make one thing clear: it wasn’t about the goddamn sandwich. It was about my own fear of compromising who I am – a girl from the farm, accustomed to hearty meals and maybe a little too much grease – and for what? So someone else could feel like I wasn’t so boring? I didn’t really think that was enough. Why go hungry for the sake of it?

Immediately sensing that something was wrong, my boyfriend pulled it out of me and we discussed the problem at hand. I realized that this entire situation was not any attempt to change me as an individual, but rather, to improve a part of me that really could use some work: my lack of adventurousness.

Have I mentioned that I really love my boyfriend?

Moral of the story here, ladies, is that in order to grow, there will be times when you and your partner can diagnose potential weaknesses and flaws, and work together to change them. The issue is recognizing when this change is a worthwhile compromise, and when you’re actually sacrificing a part of yourself. It’s not easy, and it’s not always fun, but you can benefit immensely if you allow yourself to see things through his eyes once in a while, and vice versa. Relationships are about many things, one of the most important being flexibility, but don’t change yourself too much. You should be the girl he’s in love with, and if he’s simply projecting the idea of a “New and Improved You,” neither of you will ever be happy. Simply stated, when it comes to these sacrifices in a relationship, think hard: can you bend, or will you break?