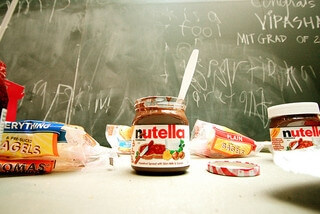 Swamped with midterms? Busy planning your spring break vacation? No time to keep up with what’s going on in the world? Don’t sweat it. Here’s a breakdown of the things that happened this week that really matter to us college students.

1. Chill out with the Nutella, bro.

The Huffington Post reported yesterday that Columbia University students are eating up to 100 pounds of Nutella each day in the dining hall. The school suspects that students are bringing bottles and containers to fill up with the hazelnut-chocolately goodness, but no one has admitted to it yet. Until the rampant pilfering is under control, Columbia will continue to pay around $5,000 per week for the coveted spread.

It’s all fun and games until…well, the Harlem Shake is always fun. Unfortunately, the Federal Aviation Administration (FAA) doesn’t agree. Students from Colorado College filmed their own version of the viral dance while on a Frontier Airlines flight, launching an FAA investigation into the airline’s safety measures. Check out the dangerously shaky video here.

3. The kind of guy you want to bring home to mom and dad.

When Devon Gluck went to a University of Delaware ATM for a little spending money, he didn’t know he was about to become one of the richest dudes on campus. The machine mistakenly shot out 18 $100 bills, but Gluck eventually decided to return the money to the bank. See, there are good people left in the world.

4. How many shots do you got there?

Before heading out to any parties this weekend, make sure to download what is easily the best app ever made for college students. Shots iGot is a pocket archive of the containers you might find yourself pouring certain things into for easy transportation—think Gatorade bottles and Slurpee cups). By sliding your finger to the appropriate level of liquid, the app (which is also available in a lite version) can tell you exactly how many shots you have on hand. Recycle responsibly, kids.

Come on, we had to include at least one world news story. North Korea is determined to test its new nuclear technology, but the U.N. is even more determined to stop them. According to CNN, the U.S., South Korea and Japan all agree that North Korea “will face significant consequences from the international community if it continues its provocative behavior.” Sounds like a classic crazy roommate intervention, if you ask us.

Photos from dnainfo.com, theverge.com and muckrack.com

Previous Post:Happy International Women’s Day!
Next Post:Back to the 80s: My Life without a Cell Phone