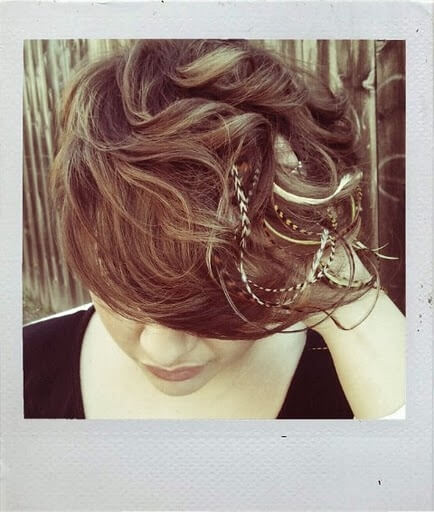 Think Twice Before You Get Feather Hair Extensions

Maybe it started with Givenchy’s Fall 2010 couture collection or perhaps it was Natalie Portman’s feather-filled performance in “Black Swan.” Then again, who really knows how trends start. Either way, for the past few seasons, feathers have been everywhere and in the past few months one of the most popular places you can find them is tangled in your hair. What trend-obsessed college students don’t realize, or like to think about, is the fact that those feather hair extensions are, well, feathers. Chicken feathers.

According to a GOOD magazine article Tom Whiting, who once bred chickens to use their long tail feathers for fly-fishing, has seen an explosion in demand with feather prices skyrocketing to hundreds of dollars beyond their suggested price. The orders for the thin feathers are coming mostly from hair salons and, as the article suggests, a majority of the people rocking these feathery locks are college-aged females. But is the extra plumage really worth the extra cash?

The GOOD article suggests that the measures taken to supply the high and growing demand have drastically altered the ways in which chickens are bread and how the animals live and die. The chickens must be selectively bread so that they have longer legs, enabling their rear feathers – called saddle feathers- to grow as long as possible without touching the ground. The birds are then kept in separate cages so that they don’t fight one another.

Whiting told GOOD that in the past, when the feathers were ready, farmers were able to kill the 20 or 30 birds by chopping off their heads, eating them and feeding the excess to the pigs. The same can’t be said today, said Whiting:

“I just harvested 780 earlier today… We don’t chop their heads off. We euthanize them with CO2 gas… We just dip ‘em in the gas and out like a light. It’s an irreducible fact that you’ve got to kill them to get their feathers.”

Like other animal cruelty related fashion trends PETA stands firmly against feather hair extensions. According to a post on PETA’s website the feather extensions last for “two or three months” which is a shorter period than the 30 weeks chickens spend in cages before they are put to death. The organization recommends finding DIY methods or synthetic alternatives that don’t endanger the birds.

Previous Post:Get Indie With It!
Next Post:Summer Nights