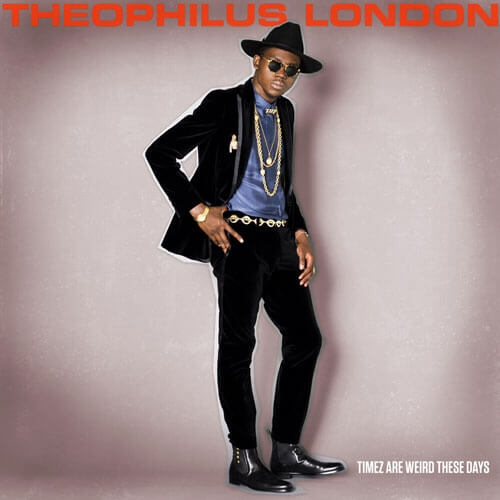 Imagine the pop-ridden love child of Kid Cudi and Prince made an album. That love child is Theophilus London and that album is Timez Are Weird These Days.

In other words, London has been described as a hip-hop electro artist, but that doesn’t fully encompasses London's original fusions of soul, funk, electro, hip hop and pop. You should not expect hard-hitting gangster rhymes from this album, but you can expect some memorable choruses, and you can expect to dance your ass off.

The album features collaborations with Sara Quin (of Tegan and Sara) on the track "Why Even Try," and with Holly Miranda on "Love is Real." The album is fast-paced and opens with "Last Name London," on which London sets the tone for the rest of the album with danceable synth and bass and a considerable amount of swagger. “All Around the World,” continues the retro vibe with a throbbing breakdance rhythm. “Lighthouse” has some OutKast-inspired undertones, but is still distinctively London’s.

The only suggestion on this end? The lyrics can sometimes be a little cheesy. Take for example, “One Last Time,” a song where you can find London rapping about being “bitten by a love bug” over a futuristic lullaby-esque beat.

Regardless, London definitely has a sound that no one can copy, and Timez Are Weird These Days is absolutely worth a listen, especially to those who need a refreshing new take on pop or hip-hop music.