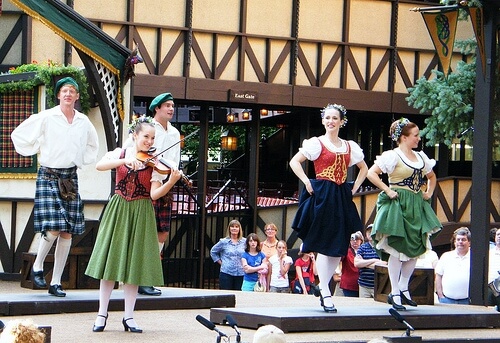 Theater Comes Alive Outside in the Summer Months

Despite the heat, summer opens up unlimited possibilities for outdoors fun: biking, swimming, sports and even cultural events such as outdoor theater.

Theater may not be high on the summer bucket list of some college students, but these five locations will appeal to even the most sluggish couch potato.

The famed Cedar City, Ut., festival was first founded when tourists expressed a need for more attractions. This year, it’s turning the big 5-oh, and special exhibits and events will be in place from June 9 until Oct. 22. Be sure to check out Bard’s Beach Bash, an authentic ‘60s beach party with free food and music, on Aug. 13. Check out http://www.bard.org/ for more information.

Featuring eight plays in eight weeks, this lakefront pavilion presents some of the best performances in the city for cheaper prices. From June 15 to Aug. 7, hits from the “off-loop” (non-Broadway) sphere with intriguing titles such as “Dental Society Midwinter Meeting” will play Wednesday through Saturday at 7:30 p.m. and Sundays at 6:30 p.m. Check out http://www.chicagoparkdistrict.com/index.cfm/fuseaction/parks.detail/object_id/312df49f-8fbf-4e35-8da1-443a4a50e3e8.cfm for more information.

The Will Geer Theatricum Botanicum

Will Geer, an actor blacklisted during the spread of McCarthyism in the 1950s, opened his own theater where fellow victimized actors and musicians could perform. This California theatre, built into the side of Topanga Canyon, provides a natural, beautiful experience for spectators and actors alike. The group affiliated with it, Theatricum Botanicum, will present the annual “Botanicum Seedlings,” a series of free play readings written by newer, younger playwrights on June 5, 12 and 19 at 11 a.m. Check out http://www.theatricum.com/seedlings.htm for more information.

Shakespeare in the Square

Made up of students from NYU’s Tisch School of the Arts and Kanbar Institute of Film and Television, this group presents free Shakespeare plays in Washington Square Park in Greenwich Village. As its mission states, “Our company provides the only opportunity to watch and perform Shakespeare as he intended it: under the sun and in front of a loud, standing, possibly distracted audience. Seen in this context, the power of Shakespeare’s language will become clear.” The group’s next performance will be Macbeth. The date has yet to be announced, but check out http://www.shakespeareinthesquare.com/index.php or http://www.facebook.com/pages/Shakespeare-in-the-Square/198533366839172?sk=info for more information.

Under the Lights: College of Charleston

Though this series of 10, 10 minute-plays written and produced by students at the College of Charleston is not outside, its innovation and quick pace provide a reprieve from traditional, lengthy performances. Now in its fifth year, this South Carolina festival offers a chance for students to explore every aspect of a production, but selection is competitive, and playwrights often go on to become winners or finalists of major awards. The genres of the plays vary across the board and are sure to delight a variety of theatergoers. Under the Lights will take place at Chapel Theatre on June 6 and 7 from 8-10 p.m.