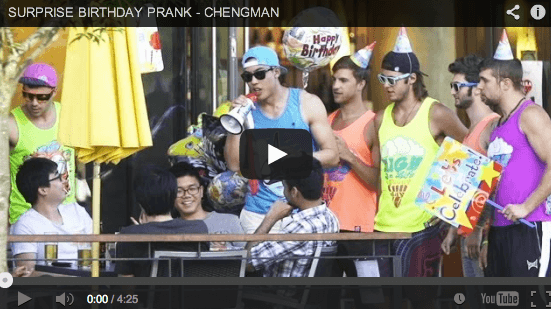 Among a sea of World Cup commercials and Shakira covers, there were quite a few hilarious prank videos this week on YouTube. From fake alligators to haunted chairs, these top 10 pranks will have half of you cracking up and the other half just feeling sympathetic toward those being pranked. (And glad it wasn’t you.) Who knows, maybe they’ll even spark ideas for that dorm prank war you lost last semester.

Hey, at least this prank was a nice one. Five bros dressed in neon wishing me a happy birthday on just an average day? I’ll take it. This may just be the next pick up strategy.

We’ve all had a professor or two who was a bit kooky. This guy completely crosses that fine line; imagine the horror of a Spanish class without a professor fluent in Spanish.

Ah yes, just some quality family time spent in a Kool-Aid war. If I ever dumped Kool-Aid, let alone frozen Kool-Aid on my dad, the reaction would be far from accepting.

As stupid as those squirmy people look, you know you would be reacting the same way.

How many of those girls who said they have boyfriends were actually telling the truth?

Camera-shy students, you’ve been warned. This video is your worst nightmare.

This prank reminds me of the time my roommate was lying so completely flat in her bed that she blended into the mattress. It freaked me out when I finally realized she was in the room.

That poor little girl is never going to be able to sit in an armchair again.

If I ever thought there was an alligator right in front of me for even a second, there’s no way I’d be standing there taking pictures with my cellphone.

Imagine taking this prank to the campus library and reading off a list of fake, inappropriately named books.