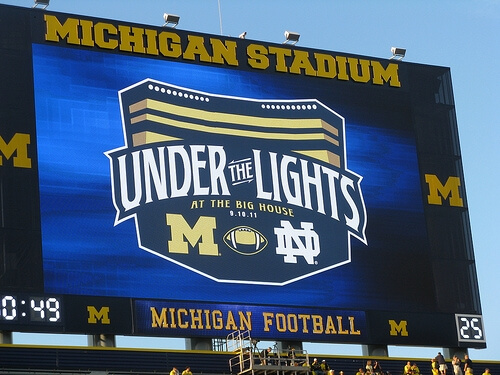 The Difference Between Football and Baseball is Literally Night and Day

Last weekend, we learned the difference between baseball and football is night and day.

An entire nation was captivated by Michigan and Notre Dame playing the first night game in the history of Ann Arbor’s hallowed “Big House,” mainly because the game was played under lights. Both teams are mediocre at best, but yet the presence of artificial sunlight gave it the type of buildup usually reserved for Super Bowls and American Idol finales.

Sure, ESPN’s over-the-top promotion had something to do with it. But it’s undeniable that, for whatever reason, when you put football and a dark sky together, something clicks. There’s more time to get “prepared” at tailgates. There’s more television attention. And it just feels bigger than it actually is – again, both the Wolverines and Fighting Irish aren’t very good. Both are exciting to watch because of their shared total disregard for defense, but not very good.

Compare all that to baseball though, where playing in, get this, the daytime has the exact same impact. Every fall, we hear cries to play a World Series game during the day. Day games are usually almost always sellouts during the regular season. Playing ball at noon or 1 p.m. or 4:30 p.m. just feels better, even when Tim McCarver and Joe Buck are involved.

At least baseball’s connection to the day is explainable. Games were played for decades in the day. The mystique of ballplayers playing in the afternoon and carousing at night was built on that distinction. But football? Until Roone Arledge and ABC decided an NFL game needed to be played on Monday nights, there was little connection.

I don’t like night football games because they aren’t the best setup for my job. But I am able to put aside my concerns for deadline and 1:00 a.m. drives to hotels on the road to realize the night just works for football, just as the day works for baseball.

So let’s get more night games in the Big Ten and a day game in the World Series.