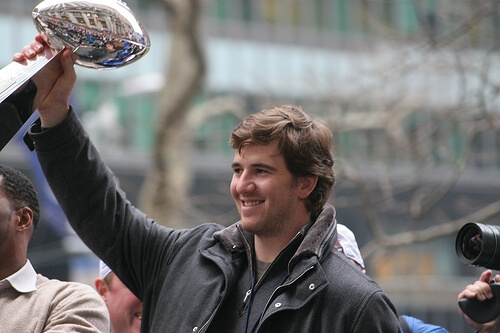 The Case for an Elite Eli

Before the 2011 NFL season, Eli Manning told 1050 ESPN in New York that he believed he was in the same class as Tom Brady – claiming an elite status in doing so. And after winning the most recent Super Bowl, he walked the walk after talking the talk. Before that, though, many categorized Manning out of the top 10 quarterbacks in the league. As a lifelong Eagles fan, it pains me to put this into writing: Eli Manning is an elite quarterback.

Here are the facts:

3)   Eli is 8-1 in his last nine postseason starts – two of those coming against the Patriots in championship games.

4)   Eli has more Super Bowl victories than every active quarterback except Brady and Ben Roethlisberger. And he’s only 31.

5)   Eli has the most road playoff wins by a quarterback with five.

However, there are a few downsides:

1)   Eli isn’t the most famous in his own family (see Peyton and Archie).

3)   At only 31, Eli is already sixth among all active quarterbacks in interceptions thrown (129).

5)   Eli is only 14th among active quarterbacks in yards per pass attempt, quite possibly the most important stat for passers in the NFL.

So, as you can see, the elite qualities for Manning’s case outweigh the negatives, in my opinion. What really caught my eye in this argument are the intangibles. Meaning, Eli Manning wasn’t an elite quarterback on an elite team last year when the New York Giants finished 9-7 and barely making the playoffs; but in the postseason, he got the job done against the league’s best by beating the Packers and Patriots – two teams with unquestioned elite quarterbacks. It’s the “clutch” gene that the media granted Tim Tebow with last season as well.

I have believed it all along as a high school athlete and now as a college student and fan: It is not how you begin; it’s how you finish. And Eli Manning finishes with the best of them – possibly even better as he’s beaten Brady twice in the Super Bowl.