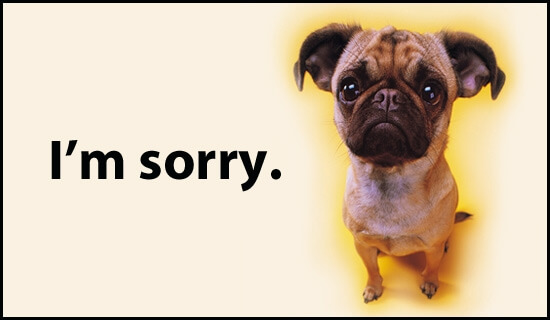 The Art of the Apology Text

When I took AP Biology in high school, I managed to do something wrong nearly every single lab. One of my lab partners used to call it "muffing up" (inspired by the presence of my daily pre-class muffin from the cafeteria). It acknowledged the fact that I had done a few things wrong but offered a sense of comic relief and an at-ease sentiment that by the end of the academic year resulted in me triumphantly owning my mistakes by exclaiming, "I'm sorry, I muffed up!"

Four years later and I'm still "muffing up." Thankfully for me and the rest of our face-to-face-contact-fearing society, we can own up to our mistakes, faults and poor judgments by way of a text message. However, apologizing effectively and warranting a positive response requires that you follow this list of five essential "Do's and Don'ts".

1. DON'T take all of the blame

If kissing ass and letting people walk all over me was the path that I had chose to take, I probably wouldn't have gotten pretty far down the road. There is really no situation that is entirely one person's fault; there are just too many factors and influences involved. Even if you did something particularly “muffed-up” or even seemingly unforgivable, begging for forgiveness like a guilt-ridden child will never earn you the respect you deserve, nor will it do anything to help your relationship with the person. If anything, it makes it worse by fostering a relationship where there is no balance of power. The act of apologizing in and of itself shows that you know you did something wrong. Which leads me to my next point:

2. DO acknowledge your wrongs

I'm probably the most stubborn person on this planet but if you screwed up, you have to own up to it. It's a matter of maturity; you are showing that you are able to point out your own faults and wrongdoings, instead of just pointing the finger at another person. Rather than making you look weak, it does the opposite. Only a strong, self-aware person can look at a situation objectively and identify where they messed up.

3. DO address the person by nickname

You can't deny the special pull in your heart that you feel when someone calls you by a nickname or an abbreviated version of your name; it instantly makes you feel closer to them and elevates your perception of your relationship with them to a higher level. By setting this tone at the beginning of your text and once or twice more throughout its body, you're reinstating the strength and closeness of your relationship with this person, automatically dropping down their guard and making them more apt to fully listen.

4. DO give a set date and time to later meet

Unfortunately, and especially if this was a big "muff up" on your behalf, you're going to have to finalize the resolution of the incident in person. I know it's a foreign concept but, alas, true growth and development is impossible without it. By giving a set date and time to meet, you're making a concrete commitment to bring closure to the situation that they can either accept or decline. If they do decline, it's not worth it in the end.

5. DON’T send it when you’re drunk

Just don’t do it. I've done it and then woke up in the morning, and read it while screaming bloody murder for roughly four minutes. However, as Hemingway once said, "Write drunk, edit sober." There's no harm in drafting out your feelings or planning what you’ll say in the text while you're under the liquid influence; it guarantees that your heart will truly be tucked within the160 characters of your message (and no, not an Emoji heart. Just avoid those like the plague.)

Previous Post:My Lover is Living a Double Life
Next Post:10 Things I Wish I Knew Before My Freshman Year