You are here: Home / Campus life / That One Time I Went to Prison

Buzzz. The large steal door slid open. I walked inside where I’m asked to place my things on the table then stroll through the metal detector. The stone-faced guard behind the glass window pushes the drawer open for me to put my ID and keys inside. He pulls it back and graces me with a Gadsden County Correctional Institute pass. I’m escorted into a gated box made from an electric fence decorated with barbed wire. Buzzz. A lady comes in from inside the prison to escort us in. As I walk through, I notice there are flowers by the entrance. Bright and colorful blossoms that stand out against all the grey buildings.

I’m walking through the outside courtyard, surrounded by blank grey walls with only a white letter to decorate them. The long walk ends at the rec center. Music folder in hand, the choir and I walk in to the room welcomed by a loud cheer and applause.

Never in my life have I seen people so happy to see me, or a group of singers for that matter. The FSU Women’s Glee Club had been coming to the prison to put together this inmate choir for almost a year now. If there was any proof that the women actually wanted to be in this choir, it was that initial uproar right there.

During rehearsal I watch the women practice. All assume a serious disposition and became very focused. It appeared to me that this was something valuable to them, and they would do anything keep it in their hands.

After rehearsal, the other women in the prison gathered in the rec center and took their seats for the concert. Looking up and witnessing the joy on their faces as they see the members of the audience (all there by choice) was over whelming. After Dr. Bowers tells the audience a little about the work they’ve done, the repertoire consisted of mostly classical music. Not the easiest to learn, might I add.

From this concert they experienced accomplishment, pride and support from each other. Members of the glee club sang with the the women and we did a few selections from our fall concert. Though it was entertaining and everyone loved it, I don’t think it had as big of an impact as the music that came from their peers. They can relate to their peers and realize if they can do something like that, then so can I.

But it didn’t end there. These women who just performed inspired the women in the audience with their voices and their talent. Following the concert, Dr. Bowers asked who would want to join for the next concert. About 15 more people raised their hands.

As everyone left, one woman told us although she is hopefully leaving the prison, she hopes that we are with them for a long time because that choir made her a better person. Music has a way of touching people when actions can’t, I say this from years as a musician.

The next day in glee rehearsal, Dr. Bowers started the class off by saying how successful the concert was. So successful that the warden wants to make it permanent because of the impact it has.

If there’s one thing I learned it’s that your action’s define you. These women are trying to make their lives right, and they choose music to help them. They’ve taken action to get their lives back on track and become a better, stronger women. Inspiration can come from any where, sometimes it’s in a small patch of colorful flowers and sometimes it’s in music. But the way to make an impact starts with an inspiration. 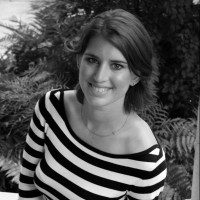 Arianna Theofan is a senior at Florida State University studying Editing, Writing and Media. She is a member of Alpha Gamma Delta, Tallahassee Community Choir and FSU Women's Glee. In her spare time she practices aerial acrobatics.

CM’s Guide to the Statistics Major
Next Post: Why You Should Drop the S.O. For the Holidays